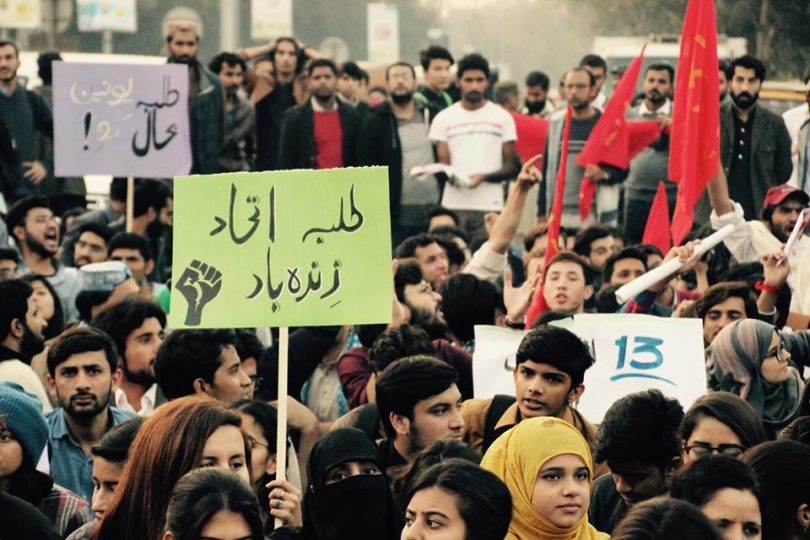 The Students Action Committee (SAC) called upon a countrywide protest march in more than 35 destinations of Pakistan and it’s administrated areas including Quetta, Karachi, Hyderabad, Multan, Lahore, Islamabad, Gilgit, Muzaffarabad to name a few and many other cities and towns for restoration of student union, against IMF imposed higher education budget cuts, formation of harassment committees, for the fundamental facilities like drinking water in hostels, better transportation and others.

Even before the formal announcement of the ‘Student Solidarity March’ there were spontaneous uprising and protests of students in almost every major education institute. The University of Baluchistan faced a huge backlash from students on sexual harassment of female students and the installation of CCTV cameras in hostel facilities. The students also protested against the militarization of the campus. The University of Punjab, Lahore has seen the biggest ever protest rally by the ordinary students against the administration backed right-wing religious fascist student organization Islami Jamiat e Talba (IJT). The students of Mehran and Sindh University in Jamshoro, Sindh took out three rallies for the restoration of student union. Two students in Islamabad’s private universities, Bahria University and COMSAT University, lost their lives due to the criminal negligence of university administration that angered the students and they took to the streets and recorded huge protests. A medical student at Chandka Medical University in Sindh was raped and murdered that sparked the anger in students throughout the country. These are just few examples to name. The students’ movement in Pakistan is on the verge of explosion. And the timely formation of SAC is the most important step to link up all these separate uprisings into one loud roar.

SAC is heading towards its biggest challenge, the Student Solidarity March, on 29th November 2019. It issued a charter of demand that includes;

The tactics adopted for the mobilisation for the march have become unique trends. The students’ activists of Lahore took Faiz International Festival as their propaganda tool, although during the mobilization of last year’s Solidarity March students used this festival but this time it went beyond the expectations. They distributed leaflets, conducted mass study circles, chanted slogans and recited revolutionary poetry. One of the videos from the festival went viral and broke the social media shackles. The slogan chanting comrade, Arooj Aurangzeb, has been seen by millions of social media user and shared by hundreds of accounts. This also came with certain criticism as well from the right-wing and opportunist elements by labelling her as leather jacket “elite”. The corporate media also seen her as a saleable commodity. She has been interviewed by dozens of media outlets, none of them had anything to do with her agenda, Students Solidarity March, or her politics, the only thing they want from her was the explanation, why a leather jacket wearing girl was screaming at a public place with the poetry of an “Indian” poet? This media hype also gave another opportunity to propagate the importance of student union and student solidarity march. But comrade Arooj, we and every other student who is organizing this march know that this mere “screen hype” has only supportive characteristic for our cause and we can only rely to our work on the ground, in the colleges, universities and streets and solidarity and support from working-class across the world. That’s what we can count upon, and we are doing it very well. Daily public meetings, regular pamphleteering in the university campuses, study circles and hotels visit are daily agenda. This is the work that can make 29th November a historic day. Similarly, the comrades and student activists in Islamabad made their venue to the Lok Virsa Mela, Comrades in Faisalabad are using Literary festival to spread the message of Student Solidarity March and simultaneously conducting public corner meetings.

Almost, after a half century the student movement in Pakistan is again on the rise. The main slogan of the countrywide march is ” The voices of ’68 will echo again!”. Not only in Pakistan but the youth all over and specifically the students are defying the inhuman Capitalist system worldwide. We are witnessing the uprisings in Chile and Bolivia. The middle east is facing another Arab Spring from Lebanon to Iraq and Iran. The students of Jawaharlal Nehru University (JNU), Dehli, India are fighting with BJP’s Hindutva regime for the students’ rights. The slogan like “Azadi” and “Asia Surkh Hai” defied the imperialist borders. Same slogans are being chanted in Dehli and Lahore. The Pakistani left poets like Jalib and Faiz are being recited by the students of JNU and the Bismil’s “Sarfroshi ki Tamana” became the symbol of Pakistani students’ resistance. The organic crisis of capitalism is expressing itself everywhere in the world and the weakest links of belated and rotten capitalism of subcontinent will not bear even a single genuine movement of students and workers. The atmosphere of India, Pakistan and Kashmir is turning red. One great movement with the genuine revolutionary leadership – a Bolshevik Party – can put an end to the misery of billions of workers and ordinary classes and certainly make the Asia RED!