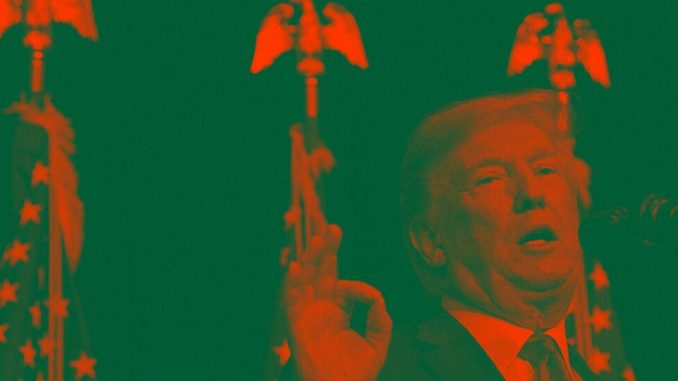 The following article was first published in Tempest. We publish it as a contribution to the debates and analysis of the elections in the United States.

Could Trump steal the election? This is a fear that has circulated around both mainstream liberal circles and much of the Left as well. Some have warned of the threat of a coup in the event of a Biden victory. Others are preoccupied with visions of Trump manipulating the vote count and, abetted by loyal Republicans, stealing the Electoral College vote in order to gain a second term. Few, however, have explained a plausible path that Trump could follow that would allow him to overturn the results of the election after November 3 and hold onto the White House despite a Biden victory.

The threat of a military coup to prevent a Biden presidency seems to be the least likely of all imagined scenarios. There is simply little evidence to suggest that top military personnel are interested in shredding the constitutional system, nullifying the elections, and proclaiming Trump the president. Quite the contrary, a historic number of former military officers and intelligence leaders have been outspoken in their opposition to Trump, even branding him a threat to United States national security. There is even a large group of alumni from the George W. Bush cabinet that has endorsed Biden and is raising money for him. And there is no significant counter-trend: no group of former Clinton or Obama officials backing Trump, no group of alumni from the national security state warning that Biden represents a threat to the U.S.

Were serious preparations underway for a military coup one would expect to see federal officials arresting opposition politicians and media figures. Yet even Bill Barr’s Department of Justice declined to pursue the indictment Trump wanted against his predecessor and all Trump could do in response was tweet. Trump did use federal forces against protesters in Portland, Oregon. But it is noteworthy that he could not rely on the major branches of the U.S. military and had to depend on U.S. Marshalls, immigration officers, and Border Patrol agents.

An August 2020 poll for the Military Times showed that Biden led Trump among active duty members. The poll has been criticized for not making its methods public and because the readers of the Military Times are disproportionately officers rather than enlisted personnel. However, for Trump to carry out a military coup, officers are exactly who he would need. The fact that the major publication of military officers published such a poll should cast doubt on any thesis that they are planning to overturn the election on Trump’s behalf.

Barton Gellman’s warning that Trump could manipulate the courts, state legislatures, and Congress to shift the electoral vote in his favor if the final results are close, appeared on The Atlantic’s site in late September. It was widely circulated throughout social media and Gellman appeared for numerous broadcast interviews the same day. Gellman argued that even in the event of an apparent Biden victory Trump would be unwilling to concede. He would challenge state results in court, and Republican legislatures might declare the results invalid and appoint their own slates of electors. “If Trump sheds all restraint, and if his Republican allies play the parts he assigns them, he could obstruct the emergence of a legally unambiguous victory for Biden in the Electoral College and then in Congress.” [emphasis mine]

However, Gellman’s hypothesis rests on a series of assumptions, all of which are at least dubious.

First, the whole project only makes sense if Michigan, Wisconsin, and Pennsylvania prove to be “tipping point” states. However, that presumes that Trump has already won Florida, North Carolina, and Arizona, three states in which he trails Biden slightly (Biden’s lead in Arizona is a bit stronger). Those three states allow mail-in ballots to be counted before November 3 which means it is likely that the media will call those states on election night or early in the morning on November 4. If Biden wins Arizona the media narrative will be that Trump is facing an uphill battle, raising the risks for anyone who wants to collaborate with the president to steal the Midwest. If Biden wins Florida or North Carolina as well, Trump’s road to 270 electoral votes is almost completely cut off. The Midwest probably would not even be necessary for Biden anymore in that event. So the scenario depends on the polls being wrong in Florida, North Carolina, and Arizona and that Trump holds on to them and that he holds on to Georgia, Ohio, and Iowa as well. (Biden is now slightly behind in Texas, roughly tied in Georgia and Ohio, and gaining ground in Iowa).

Second, the project also depends on the assumption of the “red mirage” coming true. In this scenario Trump leads substantially on election night because of strong Republican in-person voting but then Democratic mail-in votes shift the three Midwestern states to Biden in subsequent days. The problem with this is that those Midwest states allow mail-in votes to be counted beginning at 7 a.m. on November 3 and the elections there will be run by Democratic secretaries of state. Furthermore, the U.S. Supreme Court just upheld a Pennsylvania court ruling allowing ballots received by November 6 to be counted, even if the postmark is unclear. So for this to work, we would have to assume that no polling districts there look at mail-in ballots before the polls close and that they really only begin counting those ballots the next day. It is true that it will take days to count all the votes. It always does in every state. However, media typically call those states well before all the votes have been counted. If Biden is ahead with only mail-in votes remaining, it is likely that media outfits will call the state results for him. And, as of this writing, the polls predicting that Democrats would utilize various forms of early voting, including mail-in voting, at substantially higher rates than Republicans have been confirmed.

Third, the scheme depends on the collaboration of state Republican legislators “playing the parts [Trump] assigns them.” It is obvious why current Republican elected officials follow Trump today. It is in their self-interest to boost the candidate at the top of the ticket. Republican turnout in this year’s election depends on enthusiasm for the President. That will pull most down-ballot candidates across the finish line on November 3 or it will sink them. That is why embattled Maine Senator Susan Collins or struggling Iowa Senator Joni Ernst cannot afford to distance themselves from Trump. They need Trump supporters in their states to show up and vote and cannot risk dampening their enthusiasm. But all that ends once the votes have been cast. After November 3 none of these politicians will have much of a personal stake in Trump’s future. Legislators know that their prospects in the 2022 midterms will be better if the opposition party controls the White House and their fates will never again be linked to Trump’s. Besides, participating in a potentially illegal conspiracy carries great personal risk, especially given the fact that the leader of said conspiracy is completely incompetent and devoid of loyalty to those who serve him.

Fourth, the scheme also depends on the support of Congress, which has the power to certify electors sent by the governors rather than the legislatures. That means that another precondition for this whole project is that Republicans either flip the House (a probability FiveThirtyEight rates as 4%) or retain the Senate (27% chance, according to FiveThirtyEight). And again, after November 3 even Republican House and Senate members will have far weaker ties to Trump. House Republican leader Kevin McCarthy will know that his prospects of becoming Speaker are better under a Biden presidency, for example. Utah Senator Mitt Romney has already signaled he will not cooperate. And Nebraska Senator Ben Sasse has made it clear he wants his party rid of Trump. I suspect many more Republican Senators would secretly prefer Biden as president. They just cannot say so before November 3 because of the effects a Biden endorsement would have on down-ballot races. The likelihood, therefore, that they would certify slates of electors sent to them by Republican legislatures rather than duly-elected governors seems slim.

Finally, Trump would need a well-oiled executive branch fighting in the courts and in the media for him. Given that they all disparage him when he is out of the room that seems difficult to imagine. After November 3, even if Trump were to win, they would probably be looking to post-White House careers anyway. What will pad their resumes better: participating in a highly risky semi-coup attempt or standing up for the Constitution?  Even Mike Pence will have to weigh that choice.

All five of these scenarios have to take place according to Trump’s design in order for any scheme to work. Most of them are possible on their own. But taken together they are highly improbable.

What Does Capital Want?

It is a fool’s errand to attempt to identify a unified capitalist position in the coming election. Capitalists do not act as a united front and they have no secretive executive committee. Nonetheless, there is ample evidence that Biden is highly favored among U.S. capitalists. First, as is widely reported, he has a substantial fundraising advantage, indicating that wealthy donors are helping him, either because they prefer him to Trump, or because they expect him to win and want leverage. In fact, because of the Trump campaign’s financial difficulties, the president has had to cease advertising in Ohio and Iowa.

There is also evidence that key sectors of U.S. capital favor Biden. Goldman Sachs all but endorsed him recently and numerous leaks have come from the financial sector indicating that investors believe Biden will be good for markets. The U.S. Chamber of Commerce, as per tradition, has not endorsed a presidential candidate. However, the group did make waves recently by deciding to support a large number of congressional Democrats. Turnout for those Democrats will aid and abet the Biden campaign.

The threat of a coup, or even a stolen election, rests on some dubious premises. There is no indication that any significant sector of the military is interested. And Republican loyalty to Trump is purely transactional and opportunistic. Finally, a coup would likely have little support among the capitalists. There are few actors left, therefore, who would carry it out. Jared and Don Jr. seem hardly up to the job.

There is a realistic threat of post-election violence from forces on the far right. They may well target leftists and various progressive activists. It is certainly wise to prepare for that. But their ability to impact the outcome of the election or preserve a Trump presidency even in the face of an electoral loss seems minimal. After all, more than fifty million people have already voted as of October 23 and the early voters skew Democratic. Yet there are no reports of right-wing violence at polling centers or drop boxes. If militant neo-fascists wait until November 3 to disrupt voting they will be mainly suppressing Trump votes.

It is understandable that those whose primary goal is to boost Democratic turnout, might want to circulate fears of a Trump coup. Their argument is that we need a blue tsunami to stop Trump in his tracks. On the Left there is debate about whether to support a clearly neoliberal candidate. However, that question should be debated on its merits. We should not discard our understanding of how the state works, or even our basic conception of how the government functions, in order to frighten the Left into supporting the Democrats in November.