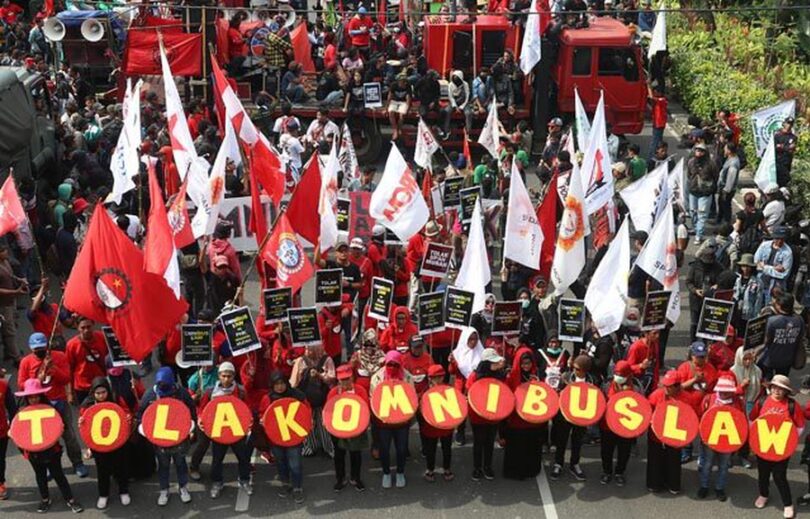 Indonesia’s political and social landscape is currently dominated by the throes of students and workers’ uprising. The recent mobilization is against the ‘Omnibus Law on Job Creation Bill’, is again scoring a fresh wave of protests from 2nd November. On October 5, the legislatures overwhelmingly passed a 905-page so-called reform bill related to labour affairs, the environment, journalism and major amendments in current 79 laws in key sectors of the economy. According to the President Joko Widodo (commonly known as Jokowi), the purpose of the bill is to attract global companies migrating from China to invest here to give a major boost to economic growth and even he defended by terming these controversial laws as “a necessary spur to economic growth”. Theoretically, a large-scale new legislation called the OmniBus Bill aims to attract investment by easing existing rules and regulations in the economy and gradually eliminating other bureaucratic controls, but its main purpose is to further relax labour laws to provide an attractive environment for investors where they can more easily exploit working class to maximize their profits. Omnibus law is the brainchild of country’s Finance Minister Sri Mulyani Indrawatin, who also served as the World Bank’s Managing Director and Chief Operating Officer.

But soon after Omnibus law passed, working-class especially youth defied this law and started the mass protest. The whole country turned into a battlefield, students and workers are strongly resisting the new law. Labour leaders are calling the new law deprivation of workers’ rights and harmful to the environment. The bill was also rejected by a coalition of Indonesian journalists’ organizations. The working class is in militant mood and students and youth are playing an extraordinary role. According to the Associated Press, on October 8, protesters tried to march on the presidential palace, but police fired tear gas to disperse them, sparking clashes. Workers as well as university and college students were targeted in the clashes. Tear gas smoke spread on the highways around the presidential palace, while rocks and bottles shattered in the streets. Protesters also damaged several government offices and set fire to roadblocks, several vehicles and a cinema. Demonstrations are also taking place in several major cities. Large numbers of protesters also took part in regions like Yogyakarta, Madan, Makasar, Manado and Bandung, while clashes broke out between police and protesters. Hundreds of arrests have been reported in the meantime. Water cannons and tear gas were used by the state to disperse workers’ rallies across the country, but they failed to quell the workers’ movement. The Indonesian Trade Union Confederation announced a nationwide strike on October 6-8 but later it called off and resorted towards judicial reviews.

All previous laws relating to dismissals and minimum wages are being repealed and workers are being left at the mercy of capitalists. Indonesian student activist Mariyah L.M wrote, “The new law predictably favours business interests: relaxation of corporate taxes to attract more business, deregulation, and eliminating the high cost of employment through a flexible labour market regime, all of which are considered major barriers to “ease of doing business.” On this metric, Indonesia was ranked 73rd in 2019 by the World Bank— Jokowi’s ambition is to rank 40th.” It will put workers into even more precarious conditions. With the absence of job security, it will empower corporations to easily lay off workers with no compensation or legal recourse. It also aims to implement an unregulated hourly wage and legalizing 12-hour workdays, 6 days a week. The law also calls for establishing US $75 trillion Sovereign Wealth Fund for ‘attracting and supporting investment’. The law abolished the ‘minimum wage’, although it provided formula concerning inflation and marketing condition in actual wage setting is put at the discretion of the capitalists. Penalties for non-compliance with the ‘minimum wage’ were abolished. The overtime limit has been increased to four hours and 18 hours per week and the mandatory holidays have been reduced from two days per week to one only. To make it easier for foreign workers to hire in the production sector, the rules for foreign workers have been relaxed. Before the law was passed, outsourcing was only allowed in jobs that were not directly related to production. Environmental regulations for businesses have been relaxed into ‘high-risk’ classified projects, although such high-risk companies still had to file an environmental impact analysis. The rules for dismissal of employees have been relaxed and the process of applying appeal against the dismissal of workers has been abolished.

Indonesia is the largest country in Southeast Asia and the most densely populated Muslim country in the world, with a total population of 270 million, about half of whom are under the age of 30. According to official figures, the unemployment rate is 17.04 per cent. On the other hand, the gap between poverty and wealth is widening rapidly. The health sector is in disarray, so far, more than 330,000 cases of the coronavirus have been reported in Indonesia. Authorities have so far confirmed about 11,600 deaths. Unemployment has risen sharply during the current Corona epidemic, with the government’s figures showing that 30 per cent of workers in the productive sector have lost their jobs and young people are growing restless. In the late 1960s, For the first time, the country’s neoliberal economic policy was implemented by Indonesian economists trained at the University of California, Berkeley, with funding from the Ford Foundation during the reign of military dictator Suharto. Now again these imperialist versions are being implemented with new labels.

The trade unions are again set to stage another round of mass protest against Omnibus laws. According to KSPSI press release issued, “Members of 32 worker confederations including the Confederation of Indonesian Trade Unions (KSPI), the All-Indonesia Workers Union Confederation (KSPSI) and the National Welfare Movement (Gekanas) will participate in the simultaneous nationwide protests… KSPI president Said Iqbal also said that the protesters would also file a judicial review for the Omnibus law at the Constitutional Court.” Alongside with abolition of the omnibus, workers are also demanding an increase in the 2021 minimum wages amid talks of a zero wage raise in 2021.

Despite all shortcoming of the current movement, Indonesian workers and students again proved that they will not accept snatching of their due rights which have been won by the struggle of years. It’s important to note here that Indonesia has very strict laws against communism. Officially Communism, alongside Marxism and Marxism-Leninism is banned in Indonesia since 1965. The law states, “The display of such symbols in an attempt to propagate communist and/or Marxist-Leninist ideals are considered a high treason, and could be punished by up to 20 years of prison”. But the Indonesian working class has marvellous left traditions, in mid-20th Century Communist Party of Indonesia was the largest communist party outside the Soviet Union. But the betrayal of Stalinism led to the dismissal of party and rise of Suharto dictatorship. But during this movement again we are seeing the rise of left, workers and students holding red flags are marching with singing internationale. This potential movement yet again proved the desire of the working class to change the system. The absence of a revolutionary leadership will put the working class into many challenges. But with all of ebb and flow the struggle will continue to strengthen the overall working-class movement in the region. We express solidarity with the Indonesian workers and students. The workers and people of Pakistan and Indonesia are standing in line against their common enemy, the IMF and the capitalist system. We have the same slogan from Jakarta to Santiago to Islamabad and elsewhere:

“Down with neoliberal policies of IMF and Capitalism”
“Long Live Workers Revolt”
March forward, the final victory will be ours!