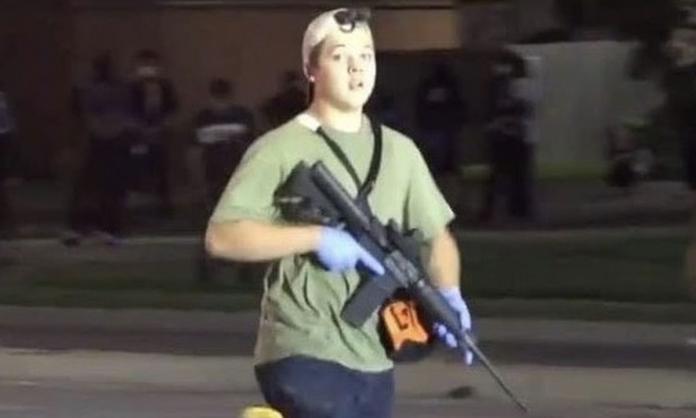 The message of the 2020 Republican National Convention was dark: the radical left is taking over America, and to defeat them, Trump must be reelected—and right wingers need to arm themselves to fight back. Before the conference could end, a teenage Trump fan had shot up a Black Lives Matter protest in Wisconsin with a semi-automatic rifle, and two protesters were dead.

To present themselves as a force of stability that can end the chaos of Black Lives Matter, the Republicans are bringing far right violence into the mainstream, and promoting it as the necessary defence against what they paint as an insurgent left.

The night before the shooting, Mark and Patricia McCloskey spoke at the Republican convention. The white couple’s only claim to fame is the viral video that circulated earlier this year of them brandishing guns at Black Lives Matter protests from their Missouri mansion. The fact that the McCloskeys were invited to the convention at all made a clear statement: these people were right to see Black Lives Matter as a threat requiring ring-wing whites to take up arms.

From a darkened room reminiscent of Get Out’s “Sunken Place”, Patricia McCloskey warned viewers that Black Lives Matter protesters could take over their white, middle class suburbs: “What you saw happen to us could just as easily happen to any of you who are watching from quiet neighborhoods around our country”. She made a barely cloaked call for conservatives to arm themselves: “America is such a great country that you not only have the right to own a gun and use it to defend yourself, but thousands of Americans will offer you free advice on how to use it”.

The following night, Kyle Rittenhouse walked out of a Black Lives Matter protest in Kenosha, Wisconsin carrying a semi-automatic rifle. “I just killed someone,” he says in a video of the moment captured by phone. Two protesters had been shot dead. Rittenhouse was white, 17, and an aspiring cop. According to witnesses and footage, police let him walk away from his murders without arresting him, his long rifle still hanging on his shoulder, while witnesses shouted that he had shot someone.

Rittenhouse is a product of the shift in US politics which has brought ideas recently seen as the preserve of the extreme right further into the mainstream of politics, with the support of the Republicans and their sympathising media outlets. Just days after the shooting, Fox News presenter Tucker Carlson made a strident defence of Rittenhouse, using arguments are identical to those made throughout the Republican Convention: if the Democrats continue to tolerate or cultivate Black Lives Matter, reactionary violence will be the inevitable result, and the perpetrators are blameless. “Kenosha has devolved into anarchy,” said Carlson, “because the authorities in charge of the city abandoned it… So are we really surprised that looting and arson accelerated to murder? How shocked are we that 17-year-olds with rifles decided they had to maintain order when no one else would?” Carlson’s show is the highest-rated cable news program. An audience of around 4.5 million viewers hearing his endorsement of mass murder.

When white nationalists took to the streets of Charlottesville, Virginia in 2017 and killed activist Heather Heyer, some were shocked at the confidence and size of the organised far right in America. At that time, Trump equivocated on the murder and saying there were “very fine people” on both sides of the racist demonstration and the anti-racist counter-demonstration. But after the Black Lives Matter movement has reemerged and become a focal point for the Republican electoral strategy, the party as a whole seems much more committed to normalising the politics of Charlottesville.

Their convention brought together conservative Republican officials and the fringe elements. Former Tea Party insurgents, now integrated into the Republican establishment, amplified the narrative presented by the McCloskeys: Black Lives Matter represents a rising tide of chaos and socialism that must be resisted at all costs. “To those of you who want to stand up and fight the socialists poisoning our schools and burning our cities,” said Rand Paul, the senator who once called himself “libertarian-ish”, “join me in supporting President Trump.”

In his closing speech at the convention, vice presidential candidate Mike Pence painted the Biden campaign as a “Trojan horse for the radical left”. His attack, and convention, as a whole, was meant to inspire the sections of the Republican base that are gravitating towards the far right. But the turmoil created by the pandemic and Trump’s handling of it means that the Republicans need to work to win over the sections of the white middle class who could flip to Biden in a search for stability. Presenting the Democrats as the face of chaos, and creating the impression that there is a need for a stable and authoritarian hand to steady the ship, could keep them onside.

The political strategy has deadly consequences. It has given official approval and a mass audience to the far right’s apocalyptic sense that Black Lives Matter represents a social disintegration. It has strengthened the idea that extrajudicial killings by armed right-wingers may be a necessary part of their project of wiping out the Black movement. In the days before the Kenosha shooting, armed right wing militias patrolled the streets; threatening protesters. Footage shows local police thanking them for their presence, and throwing them water bottles. The fact that local law enforcement can work so comfortably with armed fascist gangs, or that a prominent media commentator can praise a right wing shooter, is a testament to the interaction between mainstream conservatism and extreme reactionary violence.

There is a long history in the US of right-wing terrorism working closely with the political establishment. The Republican convention and the massacre in Wisconsin show that phenomenon reemerging.

The health crisis has so far killed nearly 180,000 people in the United States. The country is plunging further into what economists are calling the worst financial crisis since the Great Depression. The Republican establishment is now encouraging its right-wing audience to accept and celebrate armed “resistance” to the struggle for racial justice. The convention, and the tragic shooting that accompanied it, are a warning of things to come.