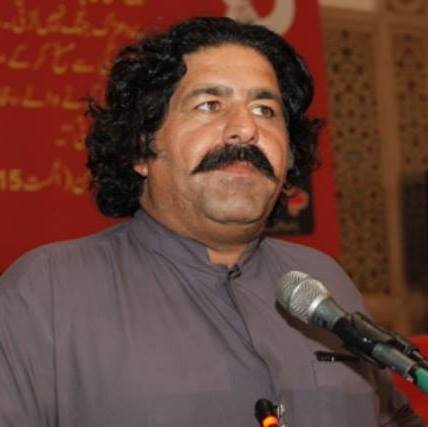 In the morning of Sunday, May 26, 2019, the Pakistani army opened fire on people protesting against its brutal operations in the region bordering Afghanistan. Videos show unarmed, peaceful protesters cheering and chanting slogans when their leaders, Pakistan National Assembly members Ali Wazir and Mohsin Dawar, arrived at the sit-in. Suddenly, shots are fired.

The firing left at least 13 dead. The real number of people killed could be much higher as it is certain dozens more were injured. The army then arrested Ali Wazir, bringing him before an Anti-Terrorism-Court the next day where he was remanded for eight days. The army is portraying him as a foreign agent, a traitor, and a terrorist.

In fact, the army’s violence and their arrest of Ali Wazir are attempts to repress an important social movement. Ali Wazir was elected as a Member of the National Assembly on an independent list. He is a Marxist and one of the main leaders of the Pashtun Defence Movement / Pashtun Tahfuz Movement (PTM). Pashtun constitute the third largest ethnic community in Pakistan and mostly inhabit the areas bordering Afghanistan.

Since emerging two years ago, the PTM has grown into an important, independent mass movement. They are demanding accountability for abuses committed by the Pakistani army and this is why they are targeted. But the PTM movement is flourishing and gathering mass support. As soon as the news of the firing spread, a curfew was imposed but this could not stop people from coming out to the streets to protest. The violence and lies by state forces show they feel threatened by the PTM’s call for justice.

The army justifies its violence in the area as part of the struggle against terrorism, and is trying to portray Ali Wazir and the PTM as terrorist sympathizers. Those are lies. Wazir and the PTM struggle for the safety and rights of the local population. The people in the region are the victims of the different warring parties, of both the Taliban and the Pakistani army. Wazir already paid an enormous price for his stand; 13 members of his family were murdered by the Taliban, including his father and brothers.

We are in solidarity with Ali Wazir and with the PTM. We call for international support for the PTM and their struggle for freedom and justice. Our condolences go to the families and friends of those killed, and we demand the arrest of those responsible for the firing on peaceful demonstrators.

We demand that the Pakistani state ceases slandering and harassing the PTM, and most urgently, we demand the immediate and unconditional release of Ali Wazir.

Executive Bureau of the Fourth International
31 May 2019