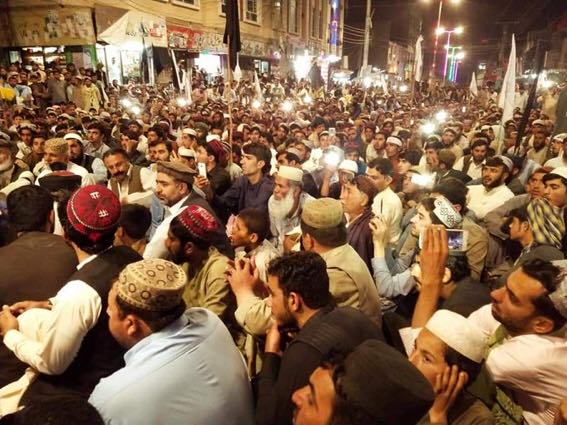 The latest information about the incident happened in North Waziristan on May 26 has confirmed that Ali Wazir has been transferred to the Peshawar jail and his foot has not been fractured.

Mass communication is great power in these days and the state is using and controlling it with iron fists. Media, as a whole, is against Ali Wazir and Mohsin Dawar, labelling them as traitors, the attackers on Armed forces and so on. The media houses are strictly instructed to no to invite any of the PTM representatives to present their take on the incidents. If we remember in one of the DGISPR’s recent press conference he said to the press that how can you invite them on TV talk shows as they are traitors and funded by foreign forces, the official stance of state without any proof.

But when the masses and movements are deprived of the resources, the movements generate their own ways and resources. Mobile phones and the Internet has become the biggest weapon in their hands. On the one side, corporate media is tiered to present this movement anti-national and it’s leaders traitors but the real videos made things clearer and all the official claim whipped in the air. Specifically, in the current incident of Khar Qamar, the new videos showed how the unarmed and peaceful protesters were cheering and chanting slogans when their leaders, Ali Wazir and Mohsin Dawar, arrived at the sit-in location wearing garlands. Suddenly the caravan caught in firing from behind. The ambush targeted many people and claimed more than a dozen lives. Ali Wazir turns back and takes a look at the injured, as claimed by Mohsin Dawar in an interview. Mohsin Dawar also said in his statement that when Ali Wazir tried to help the injured, the rounds of bullets were fired circling Ali Wazir and he was caught by the forces. The irony is that the person who interviewed him for social media groups arrested immediately.

This video has completely rejected the official stand that the attack was carried out by Ali Wazir or Mohsin Dawar and his supporters. While all corporate media is repeating false allegations.

The Federal Cabinet has given its official stand in its meeting that the enemies of development in North Waziristan have played into the hands of the world powers and put them on peace issues, and the state-run challenges will not be tolerated.

While the Minister of State Murad Saeed claimed in the National Assembly, there is evidence of the attack on check post led by Ali Wazir and Mohsin Dawar. But if there are pieces of evidence, why they are reluctant to present these in the court of Law. These are mere allegations on the elected members of National Assembly that are nowhere near the truth. A joint investigation team comprised of parliamentarians must be formed to seek the truth.

Former Prime Minister Shahid Khaqan Abbasi said in a TV interview that the people in the video are not armed, but security forces are.

While speaking to a gathering in Lahore, PML-N Vice President, Maryam Nawaz, has covertly supported the actions of armed forces in the Khar Qamar Massacre and criticized the government for not supporting the state in this case. This led Maryam Nawaz to heavy criticism by the social groups. The groups rejected the claim of Maryam Nawaz and said She shouldn’t support the massacre.

For the release and safe return of Ali Wazir and comrades and the dismissal of the cases of terrorism against them, there are protests happening around the world, including Pakistan.

In an press release on 27 May 2019 , the Human Rights Commission of Pakistan (HRCP) chairperson Dr Mehdi Hasan demanded the release of MNA Ali Wazir and any other activists taken into custody. It also calls for a parliamentary commission to be set up immediately to inquire into the matter and establish the truth. Moreover, it has been said that with the passage of the 26th Constitutional Amendment, the state must ensure the independent access of media and civil society to the former FATA. The country’s mainstream media must also understand its responsibility to report on this region fairly.

The first overseas protest happened in the Netherlands. Pashtuns from the Netherlands gathered at the Dam Square in Amsterdam in order to condemn the brutal attack on PTM protestors by the armed forces at a military check-post in North-Waziristan.With the given timeframe of fewer than 15 hours, PTM Holland supporters mobilized themselves and urged to join the protest and over 450 individuals from all across the Dutch kingdom came to Amsterdam to join a well-organized protest. Both men and women, as well as children, were seen protesting. The protest was held at the heart of the touristic Amsterdam, at the Dam Square in front of the Royal Palace. PTM-Holland workers informed dozens of Dutch citizens and tourists from all over the world who passed by the protest, about the on-going human rights violation by the Pakistani state.The peaceful protest started at 17:00 and lasted till 19:00 hours Dutch time. It has to be noticed that this protest shows that the Pashtun diaspora has risen and is able to mobilize itself at any given moment, all over the world in order to stand with their brothers and sisters. 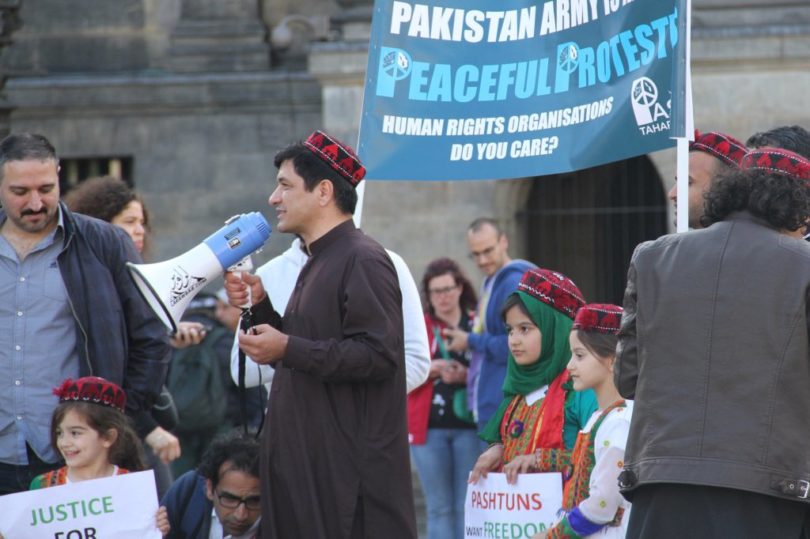 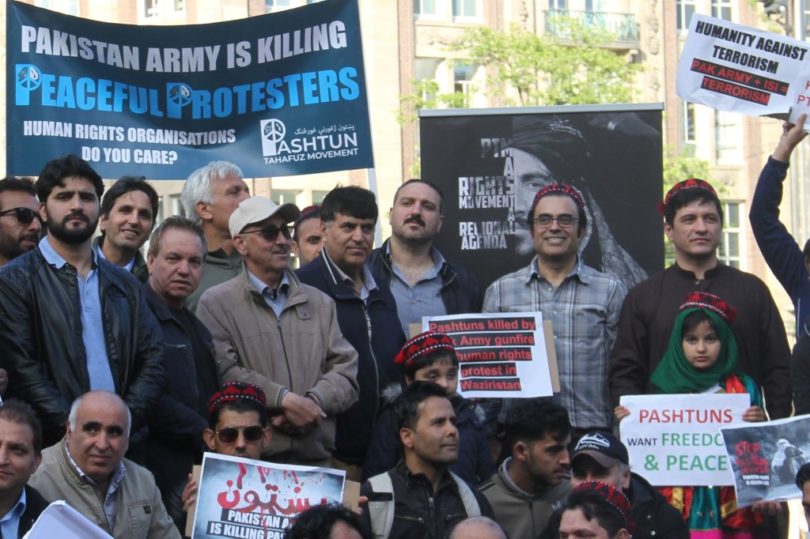 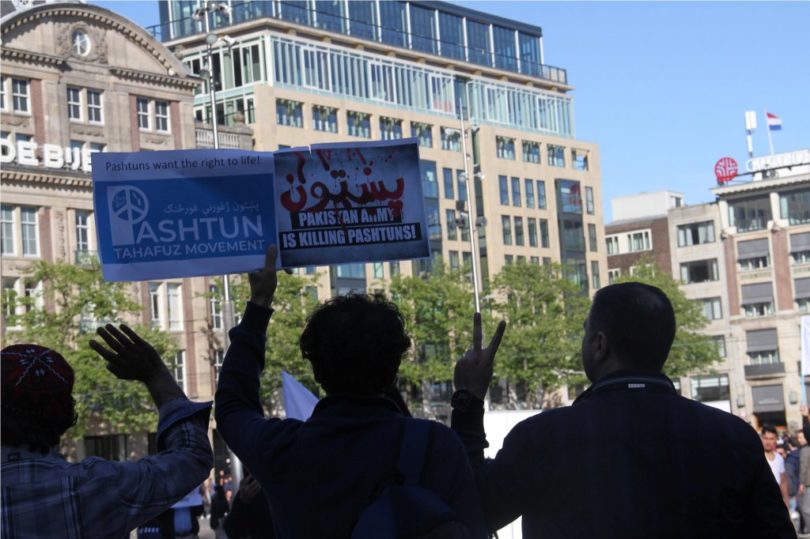 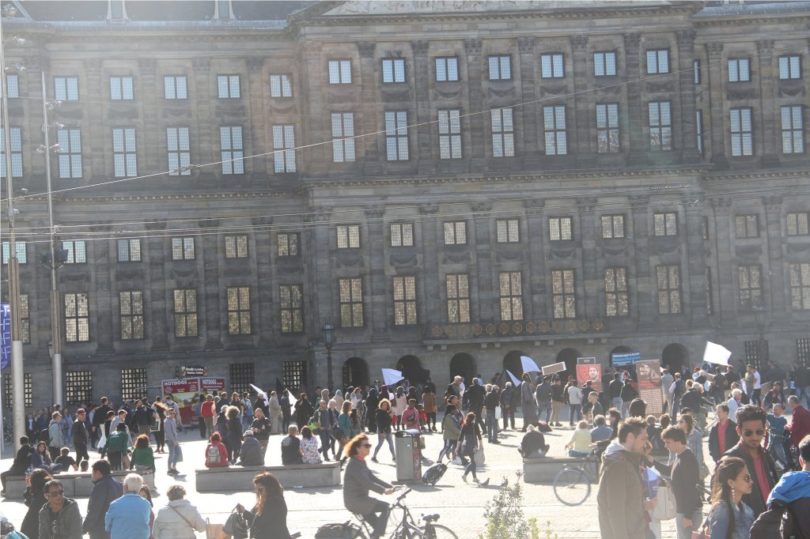 While there is a protest call in other countries, as well. PTM Canada also called a protest which was joined by many overseas Pakistanis, mainly Pashtuns. 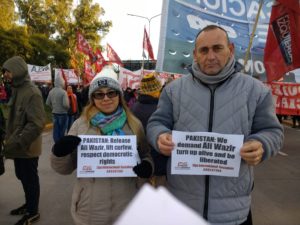 In Argentina, during a protest of Bus Workers Union Argentina, comrades of International Socialist League showed solidarity by raising the playcards that read “Pakistan: We demand Ali Wazir turn up alive and librated”. 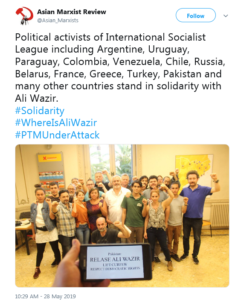 Labour organizations, trade unions and left parties of the world are publishing news articles on their websites for the release of Ali Wazir and also sending solidarity messages to Asian Marxist Review.

Students and youth took rallies and protested for the release of Ali Wazir and other PTM activists in Pakistan held Kashmir, Rawalakot and Khaigala.

The most important is Dharna in Miran Shah. Even the curfew is imposed in the area but masses from different villages and towns, in great numbers are reaching there. Telephone lines have been cut off and mobile phone services are suspended. But the numbers of protesters are continuously increasing. 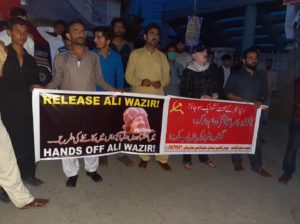 While speaking a BBC’s representative on a satellite phone, Mohsin Dawar said that the protests and Dharnas will not be ended until the safe return of our comrades and establishment of civilian supremacy in the region.

Apart from the previous FATA, there are protests in many cities of Balochistan and Khyber Pakhtunkhwa.  Thousands of people participated in a protest rally in Chaman, Baluchistan. The massive gatherings are happening in Zhob and Qila Saif Ullha, districts of Baluchistan. Every village and town of South Waziristan is witnessing huge rallies and protests for the release of Ali Wazir and other PTM activists. 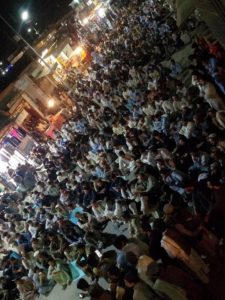 It is now clear that the popularity of Ali Wazir has been increased many times in the context of this incident, particularly in FATA. The above-mentioned video is going to be very helpful to clear the allegations made by state against Ali Wazir and Mohsin Dawar and other PTM activists.

This incident has once again made PTM a matter of global interest. Today, almost all international journals have published reports and articles about Ali Wazir and Khar Qamar Massacre. The articles written in the past regarding Ali Wazir are recirculating on social media. This wave is not ending, as state and its apologetics thought of every attack on them is strengthing them.