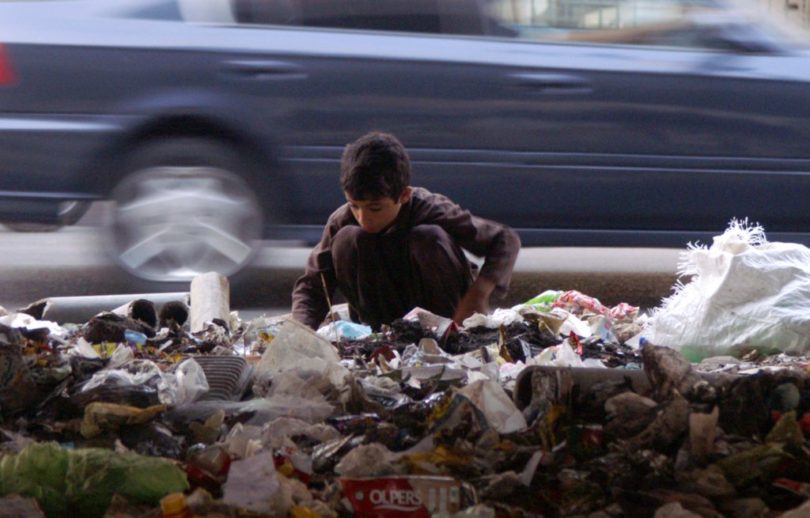 It has become almost as a ritual for the experts of the Pakistani ruling classes to fudge figures and exaggerate statistics like reduction in poverty. Every new regime based on corrupt and redundant capitalist system proclaims to have reduced poverty. The latest is a report by the ministry of planning and development. The report unveiled by Planning Minister Ahsan Iqbal last Monday in Islamabad shows the country’s official Multidimensional Poverty Index (MPI), revealing a sharp decline with acute poverty incidence rates falling from 55 percent to 39 percent from 2004 to 2015. However, even according to this report more than one-third of Pakistan’s population is living in acute poverty. In another report of 2012 the previous regime gave Pakistan’s acute poverty rate to have been reduced to 29 percent. Similarly, during Musharraf’s regime, we were told of poverty being drastically reduced based on deliberately fabricated and faulty estimates, which claimed a decline in the poverty incidence from nearly 35 percent in 2000-01 to around 23 percent in 2004-05. Most development economists refuted the possibility of Pakistan having actually reduced one-third of its poverty within a period of only four years. These figures glaringly expose the contradictions and falsities of the economic and developmental planners of the state.

Iqbal’s report gives the figures of majority rural population (54.6 percent) lives in acute poverty while this ratio is only 9.4 percent in urban areas. These statistics in no way reflect the realities of the social conditions one witnesses in urban areas. However, apart from the urban-rural divide that has become very obscure, there is a clear disparity in provinces, regions and ethnicities in Pakistan. Among the provinces, multidimensional poverty is the highest in Balochistan (71.2 percent) and Khyber-Pakhtunkhwa, where half of the population (49.2 percent) suffers from acute poverty and deprivation. This report shows that 43.1 percent of the population of Sindh is extremely poor due to lack of education, health facilities and poor living standards. In Gilgit-Baltistan, 43.2 percent people are poor while in Punjab its 31.4 percent.

The planning minister trying to be more realistic confessed something that the rulers and their economic experts tend to conceal. Iqbal said, “Poverty came down largely because of the growth in the informal economy. It is unfortunate that many millions are still left behind.” He acknowledged, “No matter how good numbers look, such development only caters to the need of the elite and the powerful.” This is the crux of the problem. In the last four decades Pakistan’s economy has shifted to its dependence of the informal sector. This black economy now comprises about 70 percent of the total economy of the country. However, the character and patterns of this economic growth is mostly in sectors that are meant for fast profits in a shortest span of time. This investment is mainly in the services sector, real estate, transport, crime and extortion. The “elite and powerful” class that the federal minister mentions owns this corruption and crime-generated black capital, and is comprised not of the failed industrial or feudal elite of the yore but those involved in crimes from drugs trade to massive corruption, extortion and ransom.

With the decline in the manufacturing industry and agriculture, this so-called parallel or informal economy is now the main sector of growth. According to some estimates the growth of this unaudited and illegal economy is around nine percent as compared to the official economy’s growth of about four percent at the most. Hence, about 78 percent job creation comes from this sector. It is abundantly clear that these jobs are totally based on daily wages or contract labour. This means no pensions, medical and health care facilities, no housing or educational facilities and no employment guarantees. This economic paradigm that is said to be the main cause of growth and hence the reduction in poverty shows the rotten nature of the ruling elite and the system their experts are trying to rely on. In reality, this economic model is increasing poverty and deprivation. Its employment on starvation wages and the cruelty of the system are manifest in its criminal nature.

The alarming indicator of the latest statistics is the intensity of poverty, as each poor person lacks access to half of the indicators selected for measuring poverty. According to this report, the MPI findings show 60.6 percent of Pakistan’s population does not have access to cooking fuel; 48.5 percent do not complete schooling; almost four out of every 10 people (39 percent) do not have any assets; and over 38 percent of the population lives in a one-room shelter. About one-third population does not have access to health facilities. These figures are clearly fudged. At the same time, other major indicators of poverty, such as malnutrition or infant and maternal mortality rates, remain alarmingly high. Pakistan has the third highest infant mortality rates in the world with more that half a million women losing their lives while giving birth to a new one.

With the state pulling out of the social infrastructure continually slashing social spending, deprivation in health and education of society are worsening with the rapid privatisation of these fundamental necessities. Again these sectors have major investment of the informal economy. With the decline in manufacturing sector, even imperialist corporations and national bourgeois are turning towards these sectors for extracting higher rates of profit. This means that basic health and education of any essential standard is being snatched away from the vast sections of the population.

All these policies of aggressive neo liberal economics are increasing deprivation and poverty. Even a figure of the minimum of 3000 rupees monthly earning to draw the criterion of the poverty line is contradictory to the realities of life. Rising commodity prices and inflation inspite of bragging by the finance minister of improving these macro economic indicators are tormenting ordinary people. Nobody dares to ask that how can this be the criterion of “non-poverty” existence if the electricity and other bills, house rent, education and health expenditures are to be paid, and on top of that the average poor households spend more than 50 percent of its total income on food intake. Yet experts point out that even this new definition falls short in terms of providing an accurate picture of the extent of deprivation in Pakistan.

According to the UNDP’s Multidimensional Poverty Index, due to lack of access to adequate living standards, education, health, and services, acute poverty in Pakistan is around 44 percent. With the capitalist system in a decline on a world scale Pakistan’s already rotting capitalism is now in an even greater mess, and these claims of poverty reduction are false and deceptive. Within the confines of this market economics there is no respite for the oppressed masses. Serious bourgeois experts are pessimistic about the future of Pakistani economy’s prospects. For their emancipation the oppressed have no option but to fight and carryout a revolutionary transformation.