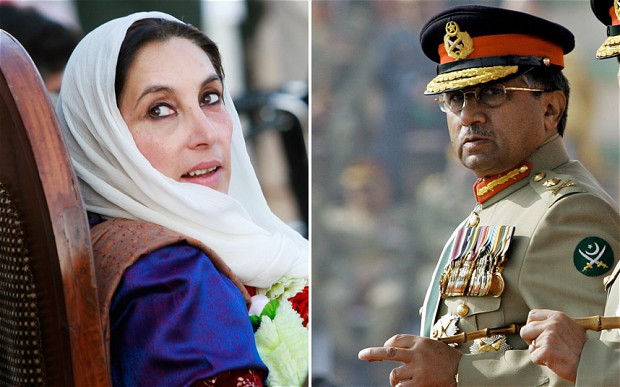 The masses not only in Pakistan but across the continents have seen through the hollow promises of the façade of capitalist democracy. In the post war period the former colonies were gripped with revolutionary upheavals in one country after another and the western imperialists led by the US resorted to brazen military dictatorships to crush these movements and struggle. However since the fall of the Soviet Union, betrayal of the so called left and the accumulation of anger and frustration under the surface the imperialists introduced this deceptive democratic regimes in as a safety valve to release some of the accumulated lava below. However, this “democratic” rule is in reality a rule for the rich of the rich and by the rich.

In Pakistan the political indifference and even contempt towards the politics and its elite in society is due to the harrowing experience of a socio economic catastrophe people endured during these ‘democratic’ regimes. An awareness has developed amongst the toiling masses that this is fraudulent and the real power, regulation of foreign and domestic policies and of course the economic decisions are taken in reality by the imperialists and implemented through their agents in the Pakistan. Even the farce of elections and the reign of the different party regimes are determined in advance by these bosses of power politics. Marxists have been putting this analysis forward for some time now but the recent revelations in a book by the former prime minister of Pakistan Shaukat Aziz– one of the few serious bourgeois economists this belated ruling class possessed.  But even he failed to salvage Pakistan’s decayed capitalist economy for long.

In his recent book, ‘From Banking to the Thorny World of Politics’ former Prime Minister Shaukat Aziz has revealed how the United States used its power and muscle over the representatives of the Pakistan’s corrupt and weak ruling class to determine policies according to its imperialist interests and the Saudis pressurised Pervez Musharraf to save Sharif’s life. US played a similar role in arranging a ‘power-sharing deal’ between the general and Benazir Bhutto.

Aziz in fact exposes the ugly face and the greedy nature of power politics in the case of Nawaz Sharif and other members of his family ‘exiled’ to Saudi Arabia. He describes that the then US president, Bill Clinton, during his stopover in Pakistan attended a meeting ‘which was neither filmed nor photogra­phed’ had told Gen Musharraf, “Be very careful; something like this doesn’t happen. You must be able to look people in the eye …” Musharraf’s compliant reply to Clinton, according to Aziz was, “I am not a vindictive man and I hear what you are saying. Nawaz Sharif’s life will not be in danger”.

Less than a fortnight later Nawaz Sharif was found guilty of terrorism and hijacking and sentenced to life imprisonment. “Crucially, he was spared the death penalty…On Saudi Crown Prince Abdullah’s instructions Rafiq Hariri started the negotiations process for Mr Sharif’s release, and sent his son, Saad, to Pakistan to act as an interlocutor with Mr Sharif. Saad Hariri’s visits were always dubbed business trips, on arrival he used to straightaway travel to Attack fort jail to see Nawaz Sharif… Saudi Arabia and the United States were instrumental in saving Nawaz Sharif’s life and helping him to leave Pakistan”.

On the infamous deal between Gen Musharraf and Ms Bhutto according to Shaukat Aziz, “After much deliberation, the Americans suggested to Musharraf that he may continue to remain the president, after stepping down as the army chief, with Benazir Bhutto as the prime minister.” During this period the then US ambassador to Pakistan, Ryan Crocker had told Shaukat Aziz: “A military leadership could not have endured forever. We started the effort to bring Benazir Bhutto back and keep Musharraf as president. It might have worked, had she not been assassinated… (Musharraf) kept negotiations a secret from his own government and would make diversions through the UAE, where she lived, on his way to other destinations”.

Mr Aziz goes on to write that,“In October 2007, just at the moment Ms Bhutto was planning to return, Condoleezza Rice told Musharraf — basically, let her [Benazir] come back, even without an understanding. If you facilitate a return, you can both find a way to cooperate…After much back and forth and a series of interactions, including a nearly two-hour telephone call by Ms Rice to Ms Bhutto to iron out the differences between Gen Musharraf and the PPP leader, the power-sharing deal was announced, with the military ruler passing the controversial NRO to exonerate Ms Bhutto and her supporters of corruption charges, thus paving the way for her return to Pakistan.”

Shaukat Aziz’s revelations glaringly expose what has been exhibited, as a democratic transformation has nothing to do with the verdict or the aspirations of the masses. The imperialists and their wily proxies in Pakistan deceived and manipulated the interests, aspirations and political leanings of the oppressed masses. However the reality is that sometime due to the acute crisis the local heads of this system resort to methods generally not in line with the imperialist strategy. In such situations the imperialists resort to pressure tactics for their economic domination and no ruler in this system, however brave and courageous he or she may portend can defy them. They succumb sooner rather than later to these imperialist designs.