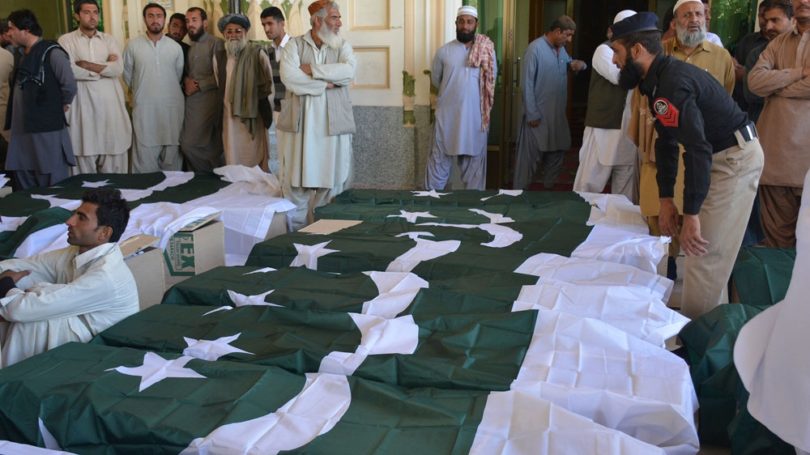 Quetta is being pulverized by terror strikes at regular intervals, every act more gruesome. But it’s not the only target. While the country’s strong man is assuring citizens terrorists have been defeated, the terrorists strike back with a vengeance and a tacit impunity. The Islamic terrorist outfits’ make a mockery of the security checkpoints and the wizardry of advance electronic devises worth billions installed to control these heinous attacks. The state security forces assert their repressive measures that make the lives of the ordinary people a continuum of added agony to their socioeconomic suffering thrust upon them by this obsolete and vicious system.

Quetta once cherished and sojourned for recreation by so many for its distinctive and serene beauty with the grandeur of the surrounding geological wonders of rugged mountains and rocky ridges. This garrison town was devastated by the 1935 earthquake but was rebuilt by the Raj for its own military and strategic objectives. Quetta became a very pleasant, diverse city inhabited by multitudes of nationalities, religions and races living in a unique harmony. However Quetta today wears the bleak look of a sprawling shantytown with crowded roads, and a palpable fear of sectarian ruthlessness and terrorist targeted attacks. Quetta is gripped with the ordeal of a severe and complex existential struggle involving western and regional powers with imperialist designs and a perplexing array of terrorist networks.

The felon for Monday’s grotesque attack on a police-training institute killing 64 cadets and injuring hundreds was once again the Lashkar-e-Jhangvi (LeJ). This has revived memories and heightened the sensitivities and fear amongst the residents of Quetta of bloody attack on the city’s civil hospital on August 16th in which more than 70 people were killed. This sectarian terrorist outfit takes its name from the late Deobandi Cleric Haq Nawaz Jhangvi, who 30 years ago under the patronage of General Zia in Pakistan founded the Sipah-e-Sahaba Pakistan (SSP) to carry out sectarian slaughter of the Shias in the country. The conflict got bloodier when a rival Shia group, Tehreek-e-Nifaz-e-Fiqah Jafferia (TNFJ) challenged these co-called Sunni sectarian outfits.

Superficially the conflict appears Sunni and Shia schism but a slightly knowledge of native conditions reveals plethora of sects all proclaiming to be Sunnis are at each other’s throats for domination of drugs, arms, ransoms, land, urban properties and capital. It also goes for the various sects under the Shia guise although these are less in numbers. The Saudi doctrine is based on Wahabism that is neither Shia nor Sunni but a different and stroppy Islamic sect altogether. The women vigilantes of Jamia Hafza and the Red Mosque terrorist brigade in the heart of Pakistan’s capital are overtly supporting and linking up with the Daesh or more commonly known as the ISIS. Their leader Maulana Aziz is venomous in his sermons and openly calls for the barbaric acts against the other sects and incites hatred against every body except his masters. He is one of the most protected and pampered assets of the deep state. General Zia’s sinister legacies still thrive in the echelons of the state power and the political elites of this tragic land. Sectarian and ethnic conflicts propped up by this vicious regime have become festering wounds in society. They were design to drive a wedge in the unity of the working class but now they are tearing apart the social fabric of the country.

LeJ broke away from SSP under the leadership of Riaz Basra, who accused SSP leadership of going soft on the Shia killings and rejected a call from other Sunni sectarian mullahs to join mainstream politics. LeJ proclaimed to be “Army of Jhangvi” and immediately embarked upon linking for viler terrorists organisations like the Taliban under Mullah Omar that was nearing the taking over in Afghanistan under the tutelage of the Pakistani army and the US. The Taliban and the LeJ both were products of the same orthodox, puritanical Deobandi tradition of Islam associated with the Islamic revivalist crusades in the subcontinent. The Taliban provided LeJ safe haven in Afghanistan through this reactionary ideological lineage.

Two decades later this heinous terrorist outfit has terrorist training camps in Afghanistan. More importantly these camps are safe havens for Pakistani criminals and mafia barons. In August 2001 LeJ alongside other militant organisations were proscribed by Musharraf. In May 2002 Riaz Basra was killed, pushing LeJ to develop far closer links with the al-Qaeda network. Lately there have been rumours of it linking up with the ISIS. Some of the most notorious and heinous acts of terror by this outfit include the kidnapping and beheading of US Journalist Daniel Pearl and an attack on French engineers in Karachi.

The key question to ask is who created and developed these terrorist groups and why? Where their funding comes from and for what purpose they have been used?  Such queries in the minds of ordinary people have lingered on for the last three decades. But in the recent period all this has been unravelling in full glare without anyone printing or speaking in public, exposing the impotency of the so-called democracy and freedom of expression in Pakistan. However the more important question is what are the real motives of the onslaught of terrorist calamities? And whom does it benefit? The regime and its ministers along with the military’s communiqués and tweets have the same routine nature and tone.

The accusations of foreign involvement although partially true is not the only cause of this carnage. The Indian belligerent state, BJP’s reactionary regime and RAW is obviously involved in several proxy insurgencies in several areas of the region. India’s involvement in proxy conflicts in Baluchistan is obvious but the Americans, Chinese, Iranians, Europeans and other western and regional states with imperialist designs have some kind of proxies and involvement for plundering the mineral rich and strategic region. Apart from the direct action of Pakistan’s military and its other security forces they even have their proxies in the Nationalist movement. With a history of several armed conflicts between the state and the Nationalist’s armed struggle in Baluchistan, there has never been any real peace, stability or development that could have benefited the ordinary people that inhabit Baluchistan in the last seventy years. Within capitalist confines the national question cannot be resolved.

The shriveled and puppet Afghan regime has its own evil designs that frequently change friends and foes definitions and the blame game. But it’s not much of a state or a government and despite massive flood of imperialist aid and training. In fact here is no real or dependable Afghan National Army. It’s a hotchpotch that is infact a pseudo institution under imperialist impulsions with no sovereignty what so ever. But these accusations do not hold up. Most states in the region at present are in no condition to launch a direct national military conflict mainly due to the problems of their internal cohesion, economic crisis and the imperialist pressures that they cannot refute.

These new strategy of waging these conflicts through proxies thought to be a very clever and efficient method of furthering their aims and interests has for some time now started to ricochet. The economic failures are now reflected in the state’s military and diplomatic fiascos. The main problem for the masters of our destinies is that these very proxies, once loyal and subservient turn into rouge forces and Frankenstein monsters for their client states. These forces of black reaction nurtured for specific rationale are now creating havoc for these states themselves striving desperately to sustain some semblance of a social order in the country of their rulership. This is happening here and in many parts of the world where the states have crumbled due to the uncontrollable backlash of these vile forces nurtured by the nation states and imperialists for specific purposes. It was the US imperialists who are now facing the retribution of history for the sabotage of revolutions and crushing the movements of the workers and peasants in this region, particularly Afghanistan.

When elephants fight the grass is brutalised and crushed. It is the common person on the streets that suffers the most. And unless these teeming millions move into action the states seem to be frustrated, demoralised and in desperation. Their capacity and will to eliminate this monster of religious terror, created by them in the first place is waning fast. These institutions are losing the resolve and determination to defeat terror. The relentless setbacks and obstinate acts of terror have brought them into a deep despair and lethargy. Iraq, Libya and Yemen are the dreadful examples of states collapsing due to such conflagrations. Such a scenario, though not imminent but cannot be ruled out from taking place in Pakistan faced with the state convulsed with internecine conflicts and burgeoning crisis. It will only be the masses that have suffered and are the victims of this gruesome war of terror. Once they enter the arena of history in a class struggle the beacon of hope and salvation shall shine bright to the far corners of the planet.