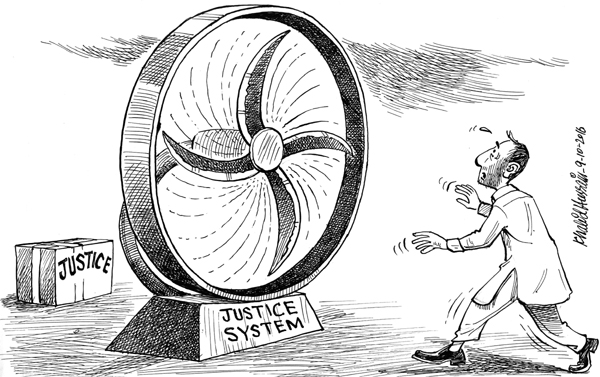 The Supreme Court’s verdict on the Pakistan Tehreek-e-Insaf (PTI) petition is perhaps another judicial firecracker with a lot of noise and minimal impact. The Supreme Court immediately adjourned for two weeks after issuing a notice to Prime Minister Nawaz Sharif over petitions seeking his disqualification on account of Panama Papers leaks. However, this has only raised temperatures on TV shows. The worst Supreme Court could do is to send Sharif home as it did with Yousaf Raza Gillani. However, there are differences in the ‘House of Lahore’ and ‘puppet of Multan’.

The Panama leaks encompasses a varied elite, from Nawaz Sharif’s children to Imran Khan himself. Corruption is embedded in the fabric of society, an inevitable product and necessity of Pakistan’s diseased capitalism. To be rich and not be involved in crime and corruption is a deceptive notion. The futility of ‘Islamabad shutdown’ could yet again prove Khan to be Sharif’s crucial political asset, venting mass resentment intermittently. However, even if this regime goes, a civilian or military replacement will pursue the same coercive policies. For suffering masses such regime changes hardly matter and never bring any respite in their tormented lives.

The original 1973 constitution was written after the stormy events of a mass upheaval and included rights essential for human existence. Briefly, it was supposed to be the primary responsibility of the state to provide those provisions without any costs or hindrance. In the prevailing epoch it is ridiculed and considered farcical even to demand these rights in the ethos of present day politics. Yet it’s the dearth of these necessities that is agonising lives of almost 90 percent of the country’s population.

Without a radical economic transformation alleviation of the beleaguered people from this misery of deprivation is a pipedream. Even within this system the costs of financial input needed to overcome social sores would be astronomical. Imperialist debt financing, military expenditures and lucrative perks and privileges of the state and the political elites including the judiciary and parliament are the three main items in the budget and GDP allocations. Would the Chief Justice take a suo moto against these unjust official expenditures for the privileged as compared to the allocations, which are some of the lowest in the world, for health and education for the people? Privatisations of health and education down to the basic village units are cruelly widening the class divide. Health and education are now expensive privileges and unaffordable for the vast majority of the population. Can the Supreme Court stem this rot?

The PTI and the Pakistan Muslim League-Nawaz both subscribe to this disastrous policy against the teeming millions. And then how does justice itself fare in this climate? We have heard a lot from subsequent Chief Justices the cliché that ‘expensive justice is no justice’? But none could impart a verdict to undo this gross travesty of justice. Nawaz Sharif and Imran Khan are the staunchest representatives of this brutalising capitalist system. In fact, all mainstream parties, at least, at the leadership level adhere to this inhuman economic doctrine.

This moneyed democratic setup is a façade for the masses. Democratic rights for the poor are a cynical farce. Just like the justice system, elections are rigged, above all, monetarily. Whenever natural calamities, wars, terrorism and violence strike invariably the destitute are always the main victims. Extensive and relentless terrorism and crime in society gives the state justifications to crush ordinary citizens with impunity. The pleas and woes of the innocent fall on deaf ears. It’s not an accident that the tyranny by police and state institutions on workers’ protests are far brutal and severe than the rallies and sit-ins of elite politicians. The veteran worker leader of Ravi Ryan, Ghulam Mehboob Dastagir, is behind bars for almost five years despite himself being a victim of extortionists. The power of the military in all crucial decisions and policies is ascendant. Under a direct military rule its political control and economic hegemony couldn’t be anymore.

Even a cursory look at the ordinary folk, their faces pale and strained, on motorcycles or walking, in cities and villages, conveys a grim feeling of despair and desperation. Everybody seems to be in a rush. Yet none of these deprived can escape this vicious cycle of harsh existence. Despite all the intensity of motion their livelihoods are becoming more agonising and convoluted. From birth till death and round the clock, the ordinary people are in a perpetual strife to make their ends meet. Still it tends to be getting more tedious and an insurmountable task. Aristotle wrote: “Man begins to philosophise when his stomach is full.” In other words, without the fulfilment of the basic human needs life becomes a meaningless pursuit for the vast majority of society while only the rich have the privilege to possess the joys and splendours of life.

The poor and the working classes are doomed into an animal existence where the whole reason in life is to struggle to acquire necessities to survive, overcome destitution and protect themselves. Humans have been reduced to such innate existence by capitalism, plunging society into the anguish of competition and envy. Only with the elimination of this wretched commercialisation of the society shall humans be able to know themselves, society, and give life a greater cause than mere existence.