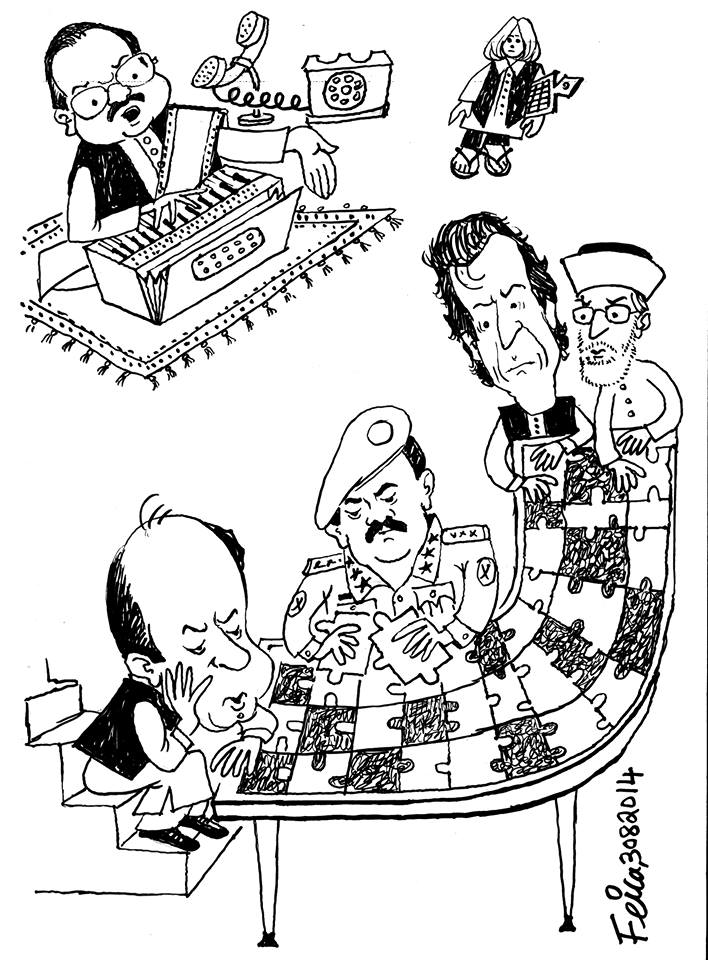 The recent rows in the corporate media around the Cyril Almeida ‘leaks’ affair gives a glimpse of the fragile state of affairs in the highest echelons of power in Pakistan.  It is just tip of the iceberg.  Apparently, it is portrayed as a rift between the civilian government and the Pakistan military regarding the activities of Islamist terrorist outfits, which has led to a warlike scenario with its neighbor and traditional rival India and the purported regional diplomatic isolation of Pakistan. But things are far deeper and grave than the usual cliché of civilian/military divide. The intrusion of finance capital mainly of the black variety, into the political superstructure, the state institutions and the economy the miserable socioeconomic conditions of the masses at large has resulted in the decomposition of the social fabric and the state institutions which is reflected in the sporadic crisis that raises it head after every short interval. The economic, social, and political crises are so intense that any triviality can shake the fragile ‘democratic’ setup to the bottom.

Ever since it’s tumultuous inception Pakistan has been in the throes of economic, social, identity, cultural and political crises. There have been very brief periods of development and stability.  The alternating military/civilian governments after every few years are the manifestation of this fact. The ruling class of the country owing to its historical belatedness and bankruptcy has failed to construct a modern bourgeois nation state. As a result the society is mired in all kinds of contradictions that are exacerbate even with minor incidents every passing day. From gender oppression to national oppression, religious oppression on the religious minorities and class oppression are festering wounds on the body politic of this tragic society.

Crisis of the state

The fallout of Afghan jihad and the intrusion of finance capital and black money into the state institutions have resulted in the deformity of these institutions. This aberration can most palpably be observed in the military. From a professional army it has been transformed into a giant enterprise wherein its top brass is tangled in all kinds of businesses. Consequently different vested and financial interests have taken root in it that bars it from acting as a unified and cohesive institution. It is not an accident that during the sham sit-ins of Imran Khan in Islamabad back in 2014, the military top brass was severely split on the issue. It reflects the conflicting and hostile financial interests at work inside the institution. These contradictions have engulfed the whole Pakistani society ravaging it with an unending spree of terrorism, mayhem, and crime.

Different jihadist outfits nurtured to intervene in Afghanistan and India later start to ravel out of control. Hence we see ‘military operations’ against them. These operations are not meant to eliminate them but to ‘discipline’ and keep them in leash. But these outfits are simply mercenaries that have become murderous and criminal mafias. More and more money and financial perks have to be doled out to discipline them.  That’s why these operations will further deteriorate the situation and new and more ferocious contradictions will emerge at a later stage further aggravating the social and economic in chaos.

In fact the very existence of these terrorist outfits as proxies of imperialists and the state signifies the weakness and crisis of the state and regional and world imperialism. The state can’t assert itself through its formal tools of oppression due to its rampant corruption, economic and historical belatedness. Hence these outfits are used as proxy tools to maintain the state oppression. But this process has logic of its own which results in further exacerbates crisis of the state.

Currently judiciary plagued by corruption is also overwhelmed by terror of these outfits. The hegemony of finance capital on judiciary has turned it into one of the most reactionary and conservative institution of the state. It is open secret that numerous terrorists were set free by these same courts while trade union activists and militant workers were charged with treason and terrorism and sent to jails.

Successive governments in Pakistan have been enforcing the dictates of IMF, World Bank and other imperialist institutions. These neo-liberal economic recipes resulted in high growth rates (at least during Musharraf era) but the social effects of these high growth rates have been disastrous resulting in more unemployment, increasing poverty, and burgeoning inequality. But now these recipes are not even producing nominal higher growth rates let alone its social effects.

According to State Bank of Pakistan report Pakistan’s total external debts and liabilities now exceeds 70 billion US dollars. The preconditions and strings attached to these debts are hampering the economy even further. One of the strings attached to these debts is the privatization of state enterprises. When the current Sharif government came to power, they pledged to privatize more than 60 state enterprises. They have succeeded in privatizing only few enterprises owing to multiple factors of uncertain economic outlook in Pakistan, world economic slump, investment crunch and the workers movements of resistance.

The trade deficit is burgeoning, exceeding 22 billion dollars in 2015. According to recent available data Pakistan’s exports in the first quarter of current fiscal year was just $4.7 billion. The Express Tribune reports, “Exports fell 9% from July through September compared to the same period of last year, reported the Pakistan Bureau of Statistics (PBS) on Friday. Compared to this, imports surged 10.7% to $11.7 billion in the same period. Resultantly, Pakistan posted $7.1-billion trade deficit in the first quarter, which was $1.6 billion or 29.2% more than the deficit in the corresponding period of last year.”

In another report the Express Tribune reports, “Pakistan’s trade balance is negative with as many as 84 countries and the highest trade deficit is with China, standing at $9.1 billion, according to official statistics tabled in the National Assembly on Monday. According to the data, the second most negative trade balance is with United Arab Emirates at $4.8 billion while it is $2.6 billion with Saudi Arabia, $1.9 billion with Indonesia, $1.6 billion with Kuwait and $1.35 with neighbouring India.”

Having failed miserably to reinvigorate the economy the Sharifs have raised the hopes of the masses around China-Pakistan Economic Corridor. But China itself is mired in its deepest economic slowdown since the financial crisis of 2008. The official versions of CPEC is still not clear especially about the amount i.e. $46 billion pledged by China to invest in infrastructure and energy projects. This loan with concealed interest rates will further burden Pakistan’s economy with even debts. The mirage of ‘transforming Pakistan’s destiny’ through CPEC is absurd. China has been working on Saindak Gold Copper Project in Balochistan since 1995. It has extracted billions of dollars of gold and copper but not a single school or hospital has been built. The area is still one of the poorest in Balochistan. Furthermore, the foreign direct investments are only meant for naked extraction of profits.

According to IMF estimates Pakistan needs an annual growth rate of 7% to absorb millions of job seekers entering the job market annually. Pakistan Bureau of Statistics has reported the growth rate in the preceding fiscal year to be 4.7% but an independent research carried out by think tanks of the Social Policy and Development Centre has refuted this report claiming it to be merely 3.1%.

The existence of a massive black and unaudited economy has further complicated the economic picture of the country. This black capital, according to different estimates, is more than two thirds of the formal economy, which implies that most jobs are created by informal sector. This sector includes drug trade, extortion, smuggling, real estate, transport, electronic media etc. This black money in turn breeds crimes and terrorist organizations, which also protects the ventures of this economy.

None of the political parties on the horizon represent the aspirations of the masses of workers, peasants, and youth. There is an endless saga of protests, rallies, strikes while talk shows, live transmissions, and discussions on non-issues from Panama leaks, corruption, election rigging and war hysteria. Since masses do not feel represented in this continuous ranting of political mumbo-jumbo, there is a political alienation on the part of the masses at large. Different political parties represent the different factions of the ruling class.

Mainly hyped by the corporate media and sections of the ruling class, PTI could not become a mass party of workers and oppressed masses, as was the case with PPP in 1968-69. The reason behind its failure is palpable from its economic and social agenda. The program of PTI is no different from its so- called adversaries. It believes in neo-liberal economic recipes that have played havoc with the lives of the already impoverished masses. PTI’s economic doctrine is the same: direct about foreign investment. In short, it does not the address the root cause of the present mayhem and calamity i.e. capitalism. The ‘new Pakistan’ promised by PTI is no different from the old Pakistan as is evident in Pushtoonkhawa.

The PPP’s current leadership is as alien to the masses as the leadership of other parties. In its successive governments it has implemented the same neo liberal recipes that gave the oppressed misery and deprivation. Socialism has become an anathema in the party that was the real cause of the PPP becoming a mass party of workers overnight in 1968-69.

The right wing religious parties exist on the political horizon mainly due to its vast network of black money and backing of the state. They have very little political support among the masses. It has rather a superficial social hegemony but no deep roots in the masses. The current aggressive spree and bullying by religious outfits are due to their role as state and imperialist proxies.

The presence of a large black economy convolutes the perspective for a mass movement in Pakistan. In fact it is one of the reasons that impedes the eruption of a mass movement because a large part of the population earns a bit of their necessities through this undocumented economy. Though there have several sporadic strikes and protests in different sectors of the economy but those were mainly isolated movements, which could not converge to form a generalised movement of the working class.

Despite all the economic onslaught of the present regime there has been no formidable movement of the class to fight back these attacks. The treacherous role of the working class leadership has played no less a role in undermining the movement. The events of Arab spring and the political upheavals in Europe have had little impacts here. This indicates the severity and complexities of the objective conditions in Pakistan. The current malaise is reflective of the dire contradictions in every institution of the state. The contradictions and infighting among different sections of the ruling class, the imperialist interventions and the absence of mass movement can even lead to anarchic civil war in Pakistan.

But ultimately the masses have to rise because at a later stage it will be the question of life or death for the oppressed classes. We cannot predict the exact moment of the eruption of mass movement but one thing is clear, the more the movement is delayed more intensely will it erupt. Once the mass movement explodes it will not stop at just overthrowing the system but will pierce the artificial borders drawn in innocent blood by the British imperialists in connivance with their local stooges, laying the foundation of a voluntary socialist federation of south Asian sub-continent.