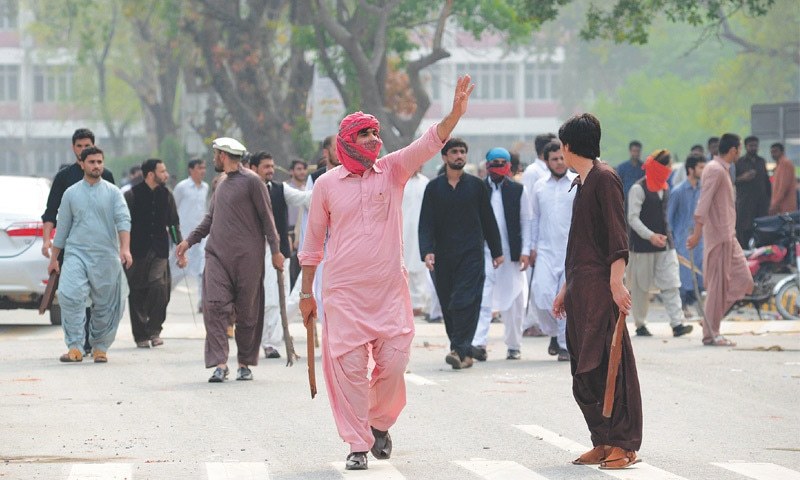 Last week a new surge in violence gripped the Punjab University, Lahore. On Monday, 22nd January at least a dozen students and two policemen were severely injured in a clash between the two students groups, the (Islami Jamiat e Talaba) IJT and the Pashtoon and Baloch Students Councils (PBC) at the University’s Electrical Engineering Department. Students belonging to the Seraiki Students Council complained that three of their comrades were picked up and tortured by IJT goons.

Scores of students were arrested and several sent on judicial remand. Of the total 196 reportedly arrested more than 180 belong to the PBC. This fact alone demonstrates the partiality of the administration. The right-wing PML (N) government’s appeasement of the IJT was laid bare when those protesting for the release of their comrades of the Baloch, Pashtoon, Seraiki organisations and the NSF and against the biased attitude of the Government were arrested far from the university campus in front of the Press Club Lahore.

Paradoxically none was arrested from similar IJT Dharnas. The cruel treatment of these arrested nationalist and left-wing students and the maltreatment by the police of their relatives who had traveled from Baluchistan and other far off places to meet and help their dear ones. They were denied meeting these students by the Kot Lakhpat jail authorities and kicked out of the police stations when they wanted to give medicines and other necessities to those in lock-up.

The Islamicist right-wing party Jamaat e Islami’s student wing the (IJT) has had a stranglehold on this South Asia’s historic institution for more than four decades. It was challenged by the left wing student’s organisations in the 1970’s and 80’s but for a long time, it has not really faced any serious resistance to its despotic hegemony. But this recent fight back from the students, mainly belonging to the nationalist organisations, has become threatening to its dominance and control of the Punjab University that has become a virtual fiefdom of the IJT. Individual students who defied its reactionary edicts were intimidated, abused and victimised. There has been a ferocious imposition of its religious sectarian codes of conduct and obscurantist cultural, ethical and moral dictates in the university.

In the spring last year the IJT attacked a cultural festival organised by the Pashtoon students. Several students were injured when a mob of IJT vigilantes gatecrashed this cultural event. The IJT is a right-wing Islamic fundamentalist outfit that acts as the de facto moral police amongst the students. In past, IJT members have often forcibly stopped Valentine’s Day and new years day festivities.

Historically Jamaat e Islami’s student wing only rose to prominence after 1974 when the Bhutto’s reforms started to fail in delivering according to the expectations of the students, youth and the workers. Left-wing students were also annoyed with Bhutto’s purge of socialists from the PPP in 1973, and its government’s military operation launched in Balochistan. They were also annoyed at the rolling back from PPP’s original socialist manifesto and caving into the pressures of the Islamist parties. IJT began by organising ‘study circles’ more in the traditions of the left indoctrinating students with religious fanaticism. They also organised ‘welfare’ schemes for the not so well off students in admissions, hostel allotments and scholarships. Most of these students came from lower-middle-class backgrounds and rural areas. Many of these developed certain inferiority complexes when confronted with modernised urban milieu. The Jamiat offered them a bigoted platform to gain prominence exploiting their reaction to this alienation.

When Zia inducted members of the Jamaat-e-Islami in his first cabinet “to help him Islamize Pakistan”, IJT’s notorious “Thunder Squad” went on a rampage, harassing and physically assaulting left-wing opponents. With the patronage of Zia’s brutal military regime, the IJT began to impose sharia in the campuses that particularly besmirched female students. It was in this period that arms from the United States had started to pour in for the “Mujahideen” sent into Afghanistan by the CIA and Zia’s state agencies to fight the “Dollar Jihad.” Many of these weapons landed with the IJT whom the US imperialists and the military regime used as a ‘B team’ to crush left-wing and trade union activists. This domestic version of the state’s policy of ‘strategic depth’ has continued till the present day.

At times it even became difficult for the Jamaat-e-Islami to control these armed vigilantes. However, this repression became a backlash against the IJT. The revulsion against this tyranny amongst the ordinary students led to its widespread defeats in the 1983 student union elections throughout Pakistan. The Zia regime banned student’s union elections through a Martial Law Ordinance. This proved to be the last year in which these elections and unions took place in Pakistan’s educational institutions. The ending of student union’s and regular elections has blocked the organised students’ struggles to get demands accepted and de-politicisation led to more violence and corruption in the campuses. Ever since the IJT has had a defacto control of the Punjab University through sheer force. It’s mother party’s conniving with the state continued and the IJT vigilantism kept perpetrating violence with impunity. Its ex-members got important posts in the state apparatus, civilian bureaucracy and the university administration.

The left-wing and oppressed nationalities students’ are exasperated at this present incident of discrimination and victimisation by the state. Their nationalist alienation has intensified. But the IJT’s hegemony in the PU can only be broken by the collective strength of the progressive students from all nationalities. The student’s unions banned by Zia were never restored by any of the civilian governments, as Zia’s other draconian amendments have remained enshrined in the constitution. The mafias of private sector education that finance most political parties resent any unionisation that could impede their obscene profits in this sector. To realise the goals of renationalisation of private education, end to class discrimination and free education at all levels, need a strong and radical struggle. A new students upsurge shall have to ignite a mass revolt such as the courageous uprising of the generation of sixties that triggered the 1968-69 revolution.