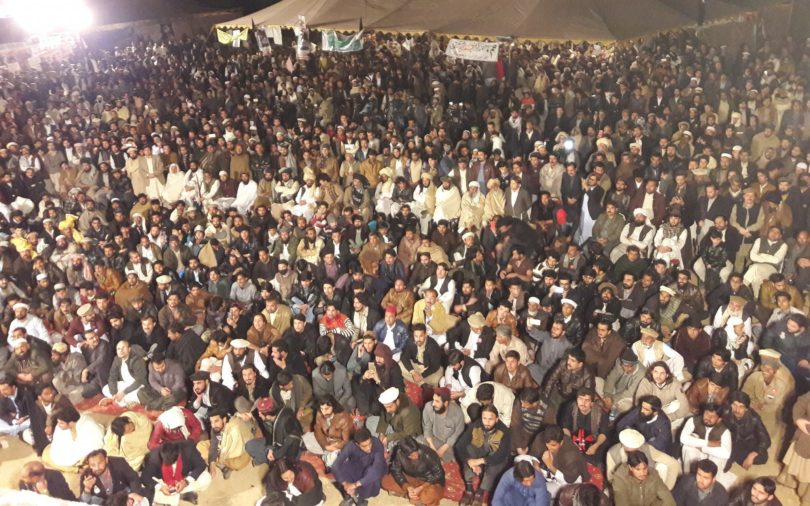 By Lal Khan
Translated By F.K
Click here to read in URDU

The upsurge of the youth and ordinary Pashtoons mainly from the FATA in recent weeks has been defying all odds till now. It has stirred Pakistan’s society in a relative inertia and has sent a fresh breeze of hope, encouragement and inspiration to struggle against all odds for the youth across the country. In ordinary times the politics, values, morality, ideology and beliefs of the ruling class prevail over the society. Fear and oppression of the state institutions force the mass of the population into an involuntary psychological subjugation. But the oppression and exploitation add to their deprivation and misery. They are discontent and yearn for a change. Yet at times for decades, there is no revolt. ‘Mainstream’ political parties and their leaders become the tools for the rulership of the exploitative system and their ‘politics’ is to maximize their plunder of the wealth created by the toil of working masses. They strive for power for wealth and authority. They employ all manner of deceit and intrigues to maintain the ‘status quo’. They try to distract the movement of the oppressed masses, conspiring to subvert their uprisings and cajole them into compromises ending up the retreat and demise of the movements. But there come the moments when mass movements cut through the yoke of the state institutions, politicians, intellectuals and clergy of the ruling class. The political elites cannot control these movements nor the defenders of this defunct socioeconomic system can stop them. After decades of oppression and atrocities by the brutal state, Islamic fundamentalists and US and other imperialists, the Pashtoon movement has erupted. The ‘Experts’ and the ‘Analysts’ of the system are flabbergasted as the movement has cut through the so-called nationalist leadership, religious parties, tribal sectarian tendencies and the massive edifice of state oppression. All their demands are legally and constitutionally legitimate. The irony is that even the legal and constitutional demands are met with oppression and allegations from the ruling class and their cronies. Much is said about the superiority of the constitution but in reality, all the clauses about fundamental rights, human dignity, and democratic freedoms are practically meaningless. Pakistan’s constitution of 1973 guarantees for every citizen education, health care, employment and the right to organize. No political party or parliamentarian has dared to raise these ‘Human Rights’ because it would shake the foundations of their system. These clauses have been made redundant by the political and the state’s elites. The question of free healthcare for all would hurt the investments worth billions in the health industry. Similarly, every party has tycoons of the education business. Barons of black capital dominate bourgeois politics and fundamental social freedoms and economic rights are being curtailed on various pretexts. Perhaps things are worse under the so-called democratic regime than they were during the martial laws as the military crushingly dictates crucial policy-making decisions, promotes dominantly its business interests and usurps wealth from behind the scenes.

The Pashtoon Tahafuz (Protection) Movement (PTM) rose up to end the oppression of the lives and social freedoms of ordinary people along with other issues of economic deprivation. It’s ascent got massive support and sympathy not only in Pushtoonkhawa but throughout Pakistan. The mainstream political parties and their leaders are alarmed and hostile to this rising movement. New young leadership that arose instantaneously, discarding the traditional religious leaders, tribal chiefs and wealthy capitalists, leads the movement. The apparently nationalist traditional party of the Pashtoons, Awami National Party (ANP), is opposing the movement, first covertly and now overtly. The president of ANP’s front ‘National Youth Organization’ Mohsin Dawar has been removed from his position for supporting this movement. There’s a severe reaction against this amongst the Pashtoon youth and the slogan “We are followers of Bacha Khan, not mercenaries of Asfandyar” is very popular. PPP leadership also organized rallies by “Party Workers” against the movement in Kurram, Mohmand agencies and other towns and areas of Pushtoonkhawa. These PPP leaders labelled the leaders of the movement as agents of “Enemy intelligence agencies”. PTI is also strongly opposing the movement. Similarly, several religious outfits have coined similar names to PTM and tried to launch parallel movements to hostile the PTM. The dirty attacks from the moneyed classes are a testament to the movement’s truth. Many state-sponsored analysts have accused the movement of being a tool of Afghan and other foreign powers. This shows the movement has become unacceptable for the custodians of this system. Political attacks came first. 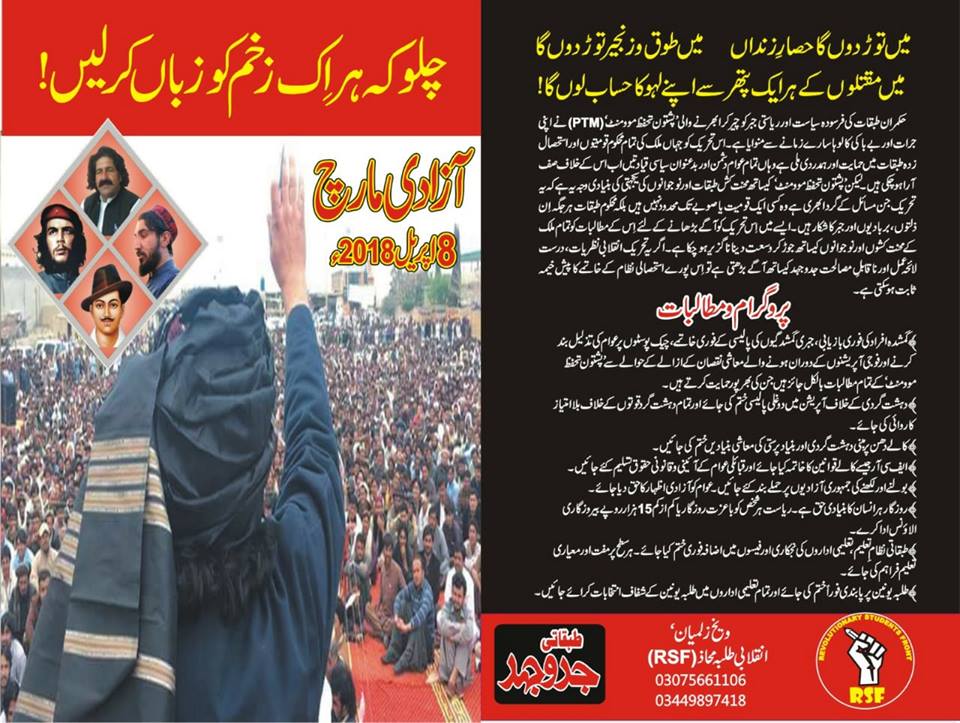 PTM has called for a massive rally on April 8th in Peshawar. The organizers are estimating that hundreds of thousands will participate. On Tuesday a public meeting was organized in Peshawar in support of the security agencies to counter this call of the PTM. In order to sabotage it the Pashtoon nationalist parties are directing their workers not to participate. These are testing times for the PTM leadership. There are many tribulations on this road. There will be slanders and accusations. At times state oppression and intimidation and other blackmail and lucrative offers will be made to buy out the leaders and break the movement. Reactionary forces can initially pledge support only to sabotage the movement at a critical juncture. But the demands of the movement are centred on ending the deprivation and misery that people from all parts of the country have to suffer. That is why progressive youth from Baluchistan and Sindh to Punjab and Kashmir are increasingly supporting the movement. In the beginning, the corporate media was suspiciously silent and followed a policy of complete boycott of coverage. Then some channels reported but generally, the media blackout continues. But mass movements do not depend on the media of finance capital to move forward. They have to counter and pierce through the corporate media’s venomous propaganda and attacks against them. Social media has made it very hard for the rulers to control the information.

The leadership has to have an unshakable resolve, forbearance and patience with a long-term strategy. By bonding the demands with the issues of workers and youth of other nationalities the movement can be strengthened and expanded. This will be a crucial measure for the safety of PTM’s leadership. This means that in the last analysis the river of this movement has to join the ocean of class struggle. Hunger and deprivation have no country, nation or religion. These are class issues and their solution lies in class solidarity and a joint struggle of the oppressed and deprived classes. No one can deny that this movement has attracted the masses especially the advance layers of youth and given them a new hope and determination. The ability of the oppressed masses to revolt and struggle is once again on the horizon for the world to see.