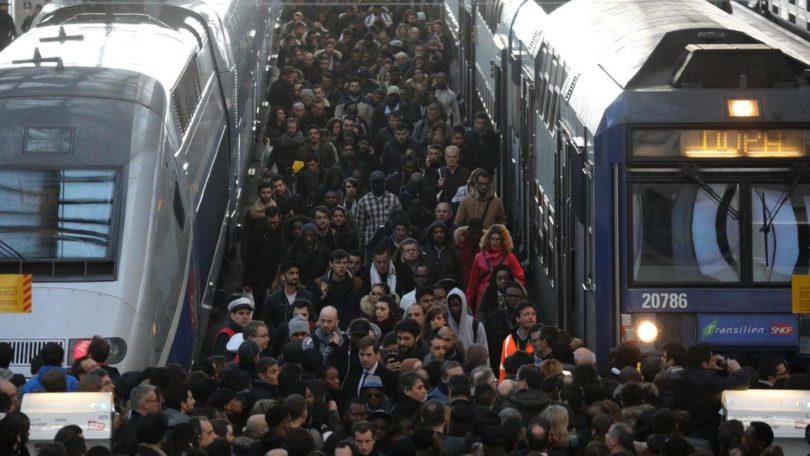 A new workers’ struggle has arisen in France. A major railway strike brought the country’s railway network to a halt on Tuesday. Its the first main riposte of the French proletariat against President Emmanuel Macron’s neoliberal economic strategy of increased austerity and cuts against the working class. The day of the strike was dubbed ‘Black Tuesday’ by the mainstream media. However, this strike action will spread over three months in a long-term strategy of struggle for the reversal of the austerity measures cynically called ‘labour reforms’ by the bourgeois analysts. This strike is Mr Macron’s biggest challenge from the French workers since his election last May.

The unions said that some of the plans are designed to pave the way for the Railway’s privatisation. The left-wing CGT union said that their action goes beyond rail workers’ conditions and marks a major test of union strength in society. “We’re defending the French public services, not just rail workers,” said Emmanuel Grondein, head of union Sud Rail. This strike has had big impacts on the society. The website that measures car traffic around the capital recorded 420km (260 miles) long traffic jams at rush hour. Yet, a growing number of French people support the strike, with 44 percent approving it. The firebrand leftist leader Jean-Luc Mélenchon said the country was witnessing the ‘start of a social power struggle in France’.

But this revolt against Macron’s capitalist government is not limited to the Railways. Thousands of students are blocking campuses to protest selection plans introduced in state universities, while garbage collectors are on strike to protest worsening working conditions and the creation of a national collection service with better retirement options. Workers’ blockaded some waste treatment plants. Energy sector unions have also called strikes to demand, among other things, an end to the liberalisation of the energy markets. Air France cancelled a quarter of its flights on Tuesday amid a strike over pay.

Macron has intensified austerity measures in this neoliberal ‘reforming’ of France’s economy. Opposition to Mr Macron’s agenda was shown on March 22, when tens of thousands of teachers, nurses and other workers came out in strong protests against these policies. This is a strong rebuttal to the regime, whose spokesman Gabriel Attal remarked just weeks ago, “We need to rid this country of its strike culture.”

Years before the crash of 2007-8, it was becoming increasingly evident that European capitalism had entered a period of terminal decay and could not sustain the social welfare system. Consequently, workers’ wages, pensions, educational and health benefits were attacked to impose austerity and cuts needed to sustain Europe’s ailing capitalist system. These concessions were attained by the workers’ intense struggles in the twentieth century. The cold war and the existence of a planned economy in the Soviet Union and Eastern Europe also added pressure on the European bourgeois to give concession to workers.

Capitalism’s post-war upswing and severe exploitation of the underdeveloped countries gave the European bourgeois enough surplus to concede these concessions and continue their primitive accumulation of capital. Now the chickens have come home to roost. The current capitalist crisis has inflicted a painful socio-economic norm in European societies. For the first time, the living standards of the ordinary people are lower than those of their previous seven generations. The breakdown of the economic equilibrium has lead to the collapse of the political suprastructure balanced on sharing power by traditional bourgeois and reformist parties. The aggravated political turmoil has given rise to xenophobic, racist and anti-immigrant currents, sharply emerging and declining even faster. The political swings and polarisation can be witnessed in France, where Marine Le Pen’s National Front increased its voter base, while the popularity of the radical left-wing leader Jean-Luc Antoine Pierre Mélenchon’s La France Insoumise has also soared.

The failure of capitalism to carry out reforms has led to the catastrophic decline of traditional mass Social Democratic parties. Historically, this signifies the protracted demise of reformism that played a major class collaborationist role in Europe for about a century. If this phenomenon has failed in developed countries, how can it ever bring respite to the plight of the deprived masses in countries like Pakistan? Traditional right-wing parties in Europe are also in disarray. The meteoric rise of Macron to win the French presidency is an example of this process. He split from the Socialist Party and came to power on the rhetoric of economic revival. The previous Socialist Party’s president Francois Holland had also carried out austerity measures, betraying the French workers’ hopes. Even without the burden of a reformist tradition, Macron has been more aggressive. He exploited the working class’s despair to inflict these vicious cuts.

But this strike has invigorated the workers’ moral and is changing the situation. It augurs a new beginning of an epoch of intense class struggle in France and across Europe.

In the last three decades, despite occasional bursts of reactionary currents, there have been several intermittent struggles Europe’s workers and youth. It was these movements that triggered the revolutionary upheaval in Tunisia and from there on to the whole of North Africa and Middle East in 2011. Marx and Engels once called France, ‘the mother of all revolutions’. The present strike movement has erupted just weeks before the 50th anniversary of one of the greatest revolutions in recent History — The French revolution of 1968. In those stormy events, the workers and the students had actually taken power in their hands. The so-called resolute president of France, Charles De Gaulle, had fled to Germany and had exclaimed: ‘lights were going out in Europe… Bolshevism is on the rise…’ The absence of a revolutionary party and leadership led to the retreat of the revolution and power returned to the bourgeois. With the French proletariats glorious traditions of class struggle, new revolutionary movements are bound to erupt. The present strike on the eve of the 50th anniversary of the French revolution can become a precursor to much larger and widespread revolutionary upheaval.