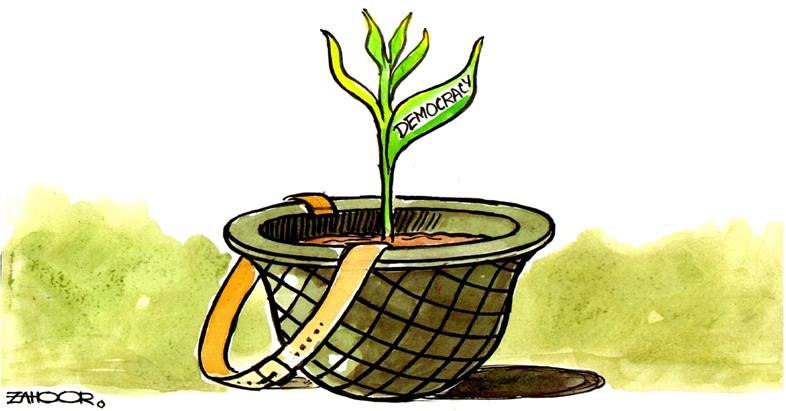 So that’s it. Democracy has been attributed by the masters of our land as the ultimate destiny for the deprived, the impoverished and the oppressed toiling subjects of this capitalist rule. This means accepting the right of the rich, the privileged, the mighty, the propertied classes and the upstarts that rise through the social layers of society with their robbery, blackmail, plunder, and extortionist crimes to enter the echelons of the parliaments and right to rulership. Since 2008 the ruling classes and their imperialist masters have been able to impose their coercive rule under the guise of the democratic façade and domination of the media, intelligentsia and the clergy that generally shape mass psychology particularly in periods of social torpor.

But what has been delivered has increasingly disenchanted, frustrated and repulsed the oppressed. The mudslinging and forays of corruption accusations between the different sections of the elite make the political scenario even more nauseating for the ordinary souls. The hyperactivity of the higher judiciary and the perceived threat of a military take-over have been used primarily by the political elites as a cover for their crimes and plunder in the name of democracy. But above all such mutual conflicts and convulsions amongst the political and the state elites are blown out of proportion by the corporate media to distract attention and relegate the burning issues of the masses into oblivion.

The economy is fragile and society is burgeoning with the social turmoil that the military dare not step into the direct rule. The generals provide cover to the clueless politicians and command crooked media baron’s to unleash a salvo of accusations to tame and intimidate the corrupt and inefficient civilian democratic regime. This advantages the military with increased budgets and material benefits during the ‘democratic’ regimes more than under direct military rule. There were times when the military could take direct control by imposing martial laws to dissipate the mess the civilians had made in the economy and society. But any oppressive regime ends up into being more corrupt and destabilising. Hence the only solution: reverting back to democracy.

The biggest damage military dictatorships incur is that under these regimes the consciousness of the working classes is thrown back and certain expectations and hopes foster in bourgeois democracy as respite from repression. However, things have turned full circle and the last few democratic regimes have punished the masses to such an extent that it will now be difficult to dupe the masses in the name of democracy. Democracy is a tricky creature. It can propel fascists like Adolf Hitler and fundamentalist bigots such as Modi and mullahs to power that impose black reaction upon societies. The post 2007-8 financial crash has exposed how the unelected bankers and the financial wizards take the most crucial decisions that affect the lives of millions. Brexit and election of Trump have reinforced the questioning of these democratic systems amongst the workers and youth, even in the so- called cradles and examples of western democracy.

A recent article in the guardian describes the situation. “Elections captured by money, lobbyists and the media; policy convergence among the major parties, crushing real choice; the hollowing out of parliaments and other political institutions and the transfer of their powers to unaccountable bodies: these are a perfect formula for disenfranchisement and disillusion…the power of money in politics poisons everything. Banks designing dodgy financial instruments; pharmaceutical companies selling outdated drugs; gambling companies seeking to stifle controls; food companies selling obesogenic junk; retail companies exploiting their workers; accountants designing tax-avoidance packages: all have an enhanced incentive to buy political space…the system buckles to accommodate their demands.”

Lenin was profoundly explicit about the real character of this democracy in a capitalist society. He wrote, “It is sheer mockery of the working and exploited people to speak of pure democracy, of democracy in general, of equality, freedom and universal rights when the workers and all working people are ill-fed, ill-clad, ruined and worn out, not only as a result of capitalist wage slavery, but as a consequence of four years of predatory war, while the capitalists and profiteers remain in possession of the “property” usurped by them… democracy in general, or pure democracy, the (bourgeois) democratic republic which is, in practice, the dictatorship of the bourgeoisie, the dictatorship of the exploiters over the working people.”

The reality is that there can be no genuine democracy in an economy and society that is vexed with inequality, exploitation and drudgery. A society that is infested with a culture of a social, ethical and moral superiority of the moneyed classes the vast majority of the oppressed classes can never ever have access to genuine democracy or have a right to influence, participate or rule through its politics. Ideologies like religious and nationalist xenophobia, liberalism and secularism are eulogised to perpetuate capitalist exploitation and imperialists plunder. The only thing masses received from these ‘ideologies’ is hunger, unemployment, deprivation of health and education and a life of poverty and misery. It’s no surprise that according to a Time- Pew institute survey only 12 percent of Pakistan’s population is interested or participates in the incumbent politics.

However, this political indifference doesn’t mean that the masses have become inert or have gone into hibernation. They cannot afford to. They have to live and survive in dire conditions struggling for every meal and basic need. Even if they have a deep-rooted indignation towards the elite and there is no political alternative on the political horizon that vows to eliminate their deprivation, their quest for a change can never die. A mass revolt can emerge in most unexpected of the situations. A mass movement that attains a revolutionary character crafts a revolutionary party and leadership from the womb of society in the white heat of class struggle. If such a movement can overthrow this socioeconomic system of coercion and exploitation a new society moving forward to eliminate want and depravity shall evolve. Only by putting an end to this disparity and wealth-based social statures, the society can achieve a democracy that is genuinely of the people, for the people and by the people.