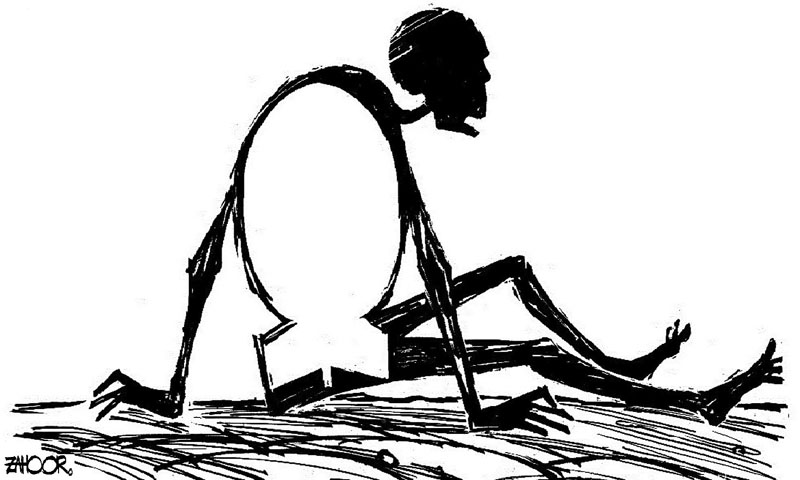 The militaristic mindset of the generals and the bourgeois political elites across the world has hardly moved ever since the times of ancient Rome, nearly two thousand years ago. Vegetius, a functionary in the Roman imperial bureaucracy, had composed a treatise in Latin on military adventures. He wrote, “Those who want peace should prepare for war.” Today’s statesmen, intellectuals, and military’s top brass, particularly in this south Asian subcontinent, have adopted it almost as a policy doctrine.

The use of jingoistic military expressions is a policy to distract and crush internal dissent through foreign hostile posturing and whipping war hysteria to captivate consciousness of the oppressed masses for more plunder. Lenin aptly said, “Wars are terrible but they are terribly profitable.” In the South Asian context, respective ruling classes have perfected the art of war hysteria even when no battles are being actually fought on the frontiers.

On Wednesday, the BJP’s economic wizard, Arun Jaitley, announced a more than 10 percent increase in the country’s defence budget for the next fiscal year. India’s defence budget was increased to INR 2.74 trillion compared to previous fiscal year’s budget of INR 2.49 trillion. This is the second consecutive increase of over 10 percent in the defence budget and excludes funding for clandestine fundamentalist and xenophobic outfits spawning proxy wars.

This massive wealth is spent on the weapons of mass destruction while teeming millions are wretched in misery and poverty. The main beneficiaries are the military’s elite and the imperialist military industrial complex that retains some of the highest rate of profits in manufacturing production the world over. The kickbacks from arms deals have created multi-millionaires amongst the state’s bosses and the political plutocrats.

According to a study conducted by the Stockholm International Peace Research Institute, India topped the list of weapons importers and accounted for some 15 percent of worldwide arms imports from 2010 to 2014. Five of the 10 biggest arms importers in this period were in Asia, which included China (five percent), Pakistan (four percent), South Korea (three percent), and Singapore (three percent). Imports are only a small part of the picture of the global arms industry.

An article in one of India’s largest media houses, NDTV, said, “Arms manufacturers of the world rejoice. The government of India is your loyal friend. Not just this government, but the previous government too — the UPA as well as the NDA…Would the money given to defence not be better spent on the development of public healthcare, education, affordable housing, and infrastructure projects? What’s surprising is how little discussion there appears to be in the national media about these levels of defence spending. In fact, you’re far more likely to read editorials claiming that the Indian army needs to spend crores on “modernization” and newer technology than articles arguing for a reduction of the military budget. Modern hardware adds to the spectacle on Republic Day in front of guests such as Barack Obama, but perhaps it’s time to set aside these archaic displays of military might and ask whether it’s necessary to spend so lavishly on machines of death in the first place.”

The experiences of the last seven decades graphically illustrate that increased levels of military spending have not made India or Pakistan safer places to live. Jingoism and the rhetoric of external danger have multiplied but the prospects of a full-scale war in the present world and regional scenario are remote. The infiltrations of the non-state proxies, media wars and accusations of terrorist intrusions are purposely designed to accentuate tensions that create insecurity and hostility. The motive is to perpetuate the rule of the system that is choking social life and mercilessly inflicts economic onslaught on the working classes. The religious clergy has become the favourite weaponry of the elites to whip up this hostile climate and subdue the masses.

With the advent of the Modi sarkar (regime), Hindutva now rules the roost in the so-called democratic and secular India. It seems that the reincarnation of the bigoted Zia regime of the late seventies and eighties in Pakistan; pulverising the social and cultural fabric of the country and viciously attacking the workers, peasants, and the progressive forces of this land. But when the largest democracy produces such a regime through an electoral process it reflects the deep and intrinsic crisis plaguing the state and the moneyed democratic system.

Hitler’s meteoric rise to power through elections in 1933 was in similar conditions with the state, and the society had drenched in a deep economic crisis, masses in extreme suffering, starvation and deprivation, and Germany’s communist and socialist parties having failed to present a revolutionary way out to the world’s most advanced proletariat. Fortunately, for Pakistan, such a regime of Islamic fundamentalists has not yet come to power through an electoral process. But with its capitalism rotting, it is a serious possibility.

Whether moderate or extreme, all bourgeois regimes since the bloody partition have ruled through this strategy of a sustained hostility to undermine the class struggle. As Marx once wrote, “those who don’t learn from history are doomed to repeat it.”

The lessons are clear. The existing ruling classes will continue to harp on these reactionary policies of antagonisms amongst the peoples, with short periodic gestures of peace and friendship to give a greater impetus to hostilities necessary for the system that they represent. The ‘defence budgets will go on rising and the allocations for the oppressed will be continuously slashed.

The anarchy of capitalism has taken its toll on society’s health, education and other basic necessities. This has brutalised society wit elements of barbarism looming large. It represents the malaise and decay of a system that is obsolete and aggravates the socioeconomic crisis. Their own experts are gloomy of any bright prospects under capitalism. The reactionary politics, virulent diplomacy and the obscurantist smog choking society are the direct ramifications of this decay. If this is the only future that can be envisaged under this system then there are not many choices left for the new generation of the workers and the youth. Either this system has to be transformed through a revolutionary insurrection or the society’s culture and civilised existence will be doomed to extinction.