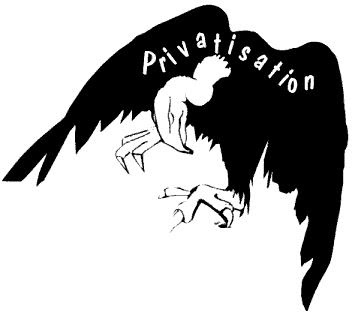 Behind the façade nauseating judicial circus and somersaults of the Apex Court, the ranting and rowing politicians of the various factions of Pakistan’s ruling elite have common interests of pursuing their lust of wealth accumulation. In their contemptuous attitude towards the toiling classes, there’s not a whiff of condemnation by these conflicting politics against the Sharifs on issues such as privatisation. The PML (N) regime announced yet another onslaught of this disastrous policy. Chairman of Privatisation Commission, Muhammad Zubair said last Wednesday “The government will complete transactions of three major public sector entities by June this year.” He described 2017 as a ‘strong year for privatisation’.

The Pakistan Steel Mills (PSM), Pakistan International Airlines (PIA) and the Oil and Gas Development Company Limited (OGDCL) are up for grabs by June this year. Four other public sector entities — First Women Bank, House Building Finance Corporation, Pakistan Re-Insurance Company and National Insurance Company — are also on the list. When asked about the future of workers in these industries to be auctioned, Mr Zubair’s ostentatious mask slipped: “it would entirely depend on the new company as to how many employees they would require.”

Pakistan’s historically belated, economically debilitated, socially conservative and culturally obscene ruling class has become even more reactionary with its system’s decline. It’s subservient intelligentsia, corporate media and political experts have lost pathetically ape the West. Paradoxically it relies heavily on the forces of obscurantism to weaken the toiling classes by thrusting them into a choked and a bigoted social milieu.

However these corrupt and tyrannical rulers that have burdened the working masses with mammoth imperialist debt have a slavish attitude towards the IMF and the World Bank themselves. These institutions call the shots in deciding the economic policies and have a stranglehold on the country’s resources. There is a sustained pressure of these establishments to impose privatisations even if it means huge losses of the country’s assets. No wonder there’s even greater exploitation now than during the era of direct colonial rule. The economists and politicians of Pakistan’s elite mostly educated in western universities servilely follow botched capitalist doctrines. These anti-people recipes of economic growth have wrecked havoc with the lively hoods of the workers and made services and utilities unaffordable for the vast majority of the population.

Our political bosses are so much rapt by Britain that every reference in judicial cases, political systems and economic doctrines are copied from their former colonial masters that had grafted this bourgeois in the first place. But even here the privatisation process initiated by Margaret Thatcher has been an agonising calamity for the Britain’s ordinary people. The privatisation of the British rail has been an abject failure. Since the privatisation, the amount of government subsidies to the rail industry went higher than it was in its state-run days. A yearly average of just over £1bn in the late 1980s shot up to more than £6bn in 2006-2007, according to a public spending report from the House of Commons.

In 2011 Britain’s Tory transport secretary Philip Hammond, confessed in wake of the sharp rise in ticket prices since privatisation that train travel was “a rich man’s toy”. The myth of “improved service” under privatised railway was graphically exposed when the opposition and Labour party leader Jeremy Corbyn had to sit on the floor of the train on a journey from London to Coventry last year. The most destructive legacy of privatisation has been job losses. After the miners’ strike of 1985 more than 200,000 jobs were lost from coal privatisation while 100,000 jobs were shed at British Telecoms. British Steel shed 20,000 jobs by its privatisation. Around the world the catastrophic role of privatisation has been no different inspite of the opposite propaganda being blasted by the corporate media ceaselessly.

Even the former Conservative Prime Minister Harold MacMillan lamented Thatcher’s privatisation as being tantamount to “selling off the family silver”. Selling household items is a desperate act depicting a failed financial system. Privatisation is a manifestation of a bankrupt state and its economy. It exposes the obsolete nature of capitalism.

Gen. Zia’s dictatorship returned the industries nationalised by Bhutto to the capitalists with heavy compensations. Ironically when Benazir came to power in 1988, she openly applauded ‘virtues’ of Thatcher’s privatisation ‘revolution’ and appointed accountant’s to devise a privatisation plan for Pakistan. Ever since every successive government has pushed privatisation. Sharif and his crony cohorts have failed to fulfil their lustful privatisation schematics due to the steep decline in investment arising from world capitalist crash and open revolt of the workers of some of these industries. The OGDCL workers strike of 2014 forced PML (N) to a hasty retreat. The historic PIA 2016 strike that grounded the PIAs entire fleet forced the regime to back down at least provisionally.

Workers in WAPDA have been resisting privatisations for long. The steel workers have held several protests for their unpaid wages and threats to their jobs. We are also witnessing an emerging radical mood amongst the railway workers and in numerous industries and services sectors. The trade union membership and the proportion of organised labour have declined to less than two percent. In the private sector unionisation is almost none. But the strikes we have witnessed the fighting potential of Pakistan’s proletariat.

Workers shall never tolerate these traumatic policies of restructuring, contract labour, privatisation and liberalisation for long. Privatisation of the social sectors of health, education, water, sanitation and others is tormenting the daily lives of the oppressed classes. However, recent strike actions show what can be achieved if workers from different sectors are united in a massive general strike. It will seriously challenge the system and create a revolutionary situation where socioeconomic transformation can become a reality.

The solution to the economic crisis of capitalism is not privatisation. Neither can the nationalisations under state capitalism end the corruption and losses in industries. Either the whole economic basis is transformed from a market capitalist system into a collective ownership and planned economy of the workers or under this tyrannical rule of capitalism society is doomed. Such a historic transformation of society is only possible through a socialist revolution.