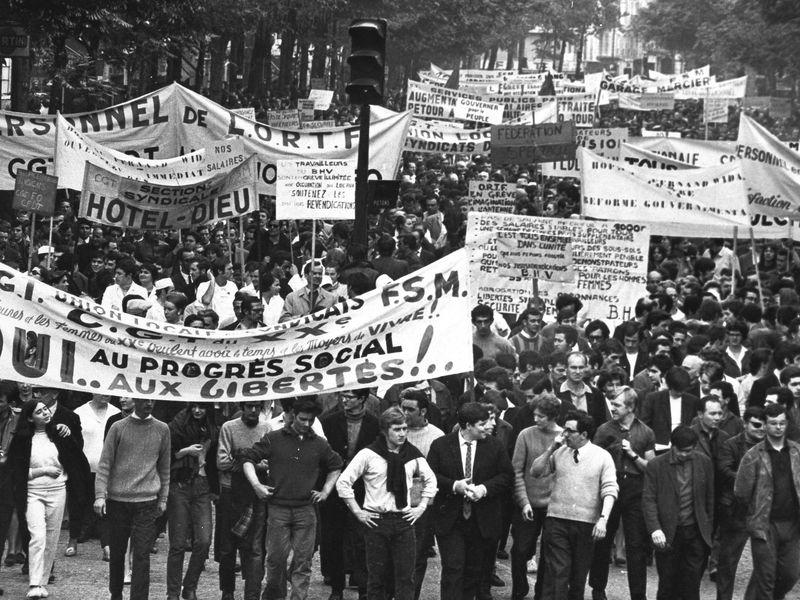 Fifty years ago May 31, 1968 saw the peak and waning of the twentieth century’s greatest revolution in France. It was an epoch of a revolutionary wave sweeping across the world. These youth and particularly students triggered mass revolts affecting different countries in different ways. Belief in internationalist solidarity, the consciousness of being involved in a common fight against capitalism and imperialism were the striking feature of that epoch. By the autumn of 1968, this revolutionary fervour had erupted in Pakistan. The entrance of Pakistan’s virgin proletariat created a revolutionary situation in this so-called conservative society. 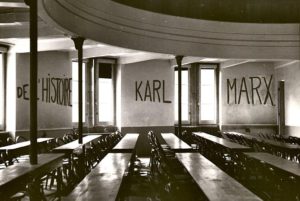 The upheaval in France during May 1968 was punctuated by demonstrations and massive general strikes with occupation of universities and factories across the county. At its peak this rebellion brought the entire French economy and society to a standstill. The protests also spurred an artistic movement, with songs, innovative graffiti, posters, and slogans. This uprising began with a series of student protests. It then spread to factories with strikes involving 11 million workers, more than 22% of the total population of France at the time, for two consecutive weeks. It was the largest general strike in the history of France and Europe.

The student occupations and wildcat general strikes were initially repressed brutally by the state. The de Gaulle administration’s attempts to crush those strikes only inflamed the situation further, leading to street battles with the police in Paris’s Latin Quarter, followed by the spread of general strikes and occupations throughout France. 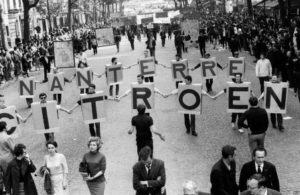 In February 1968, the French Communists and Socialist parties had formed an electoral alliance. On 22 March, students from far-left groups, some prominent poets, artists and musicians occupied an administration building at Paris University at Nanterre and started agitation against class discrimination in French society and universities. In the following weeks of conflicts between students and police at the Nanterre campus of the University of Paris, the administration shut down the university on May 2, 1968. Students at the Sorbonne campus of the University of Paris met on May 3 to protest against the closure and the threatened expulsion of students.

On Monday, 6 May, the national student union, the Union Nationale des Étudiants de France (UNEF) and the union of university teachers called a march to protest against the police raids of Sorbonne. The march of more than 20,000 students, teachers and supporters was baton charged by the police. While the crowd dispersed, some began to erect barricades out of whatever was at hand, while others threw stones, forcing the police to retreat. The police then got reinforcements and assaulted the students again with tear gas shell and violently baton charged again. Hundreds of students were arrested and injured. The same day high school student unions joined the struggle. The next day a much larger number of students came out into the streets strengthening the protest demonstrations.

On Friday, 10 May another huge demonstration took place on the Rive Gauche. When the elite state forces tried to block them from crossing the river, the crowd threw up barricades. The police viciously attacked at 2:15 am in the morning, arresting and wounding hundreds and clashes continued throughout the next day. These events were broadcast on radio and it was clear that the police had intruded, through agent provocateurs, who were burning cars and throwing Molotov cocktails. 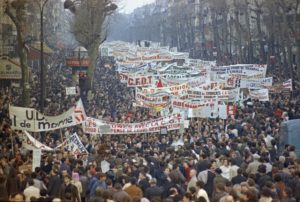 The government’s ruthless reaction brought on a wave of sympathy for the strikers in society. Many of the nation’s more mainstream singers and poets joined after the state’s brutality came to light. The leaders of main left union federations, the Confédération Générale du Travail and Force Ouvrière (CGT-FO) were forced to call a one-day general strike on May 13. Over a million people marched through Paris on that day; the police retreated with the escalating upsurge. Prime Minister Georges Pompidou personally announced the release of the prisoners and the reopening of the Sorbonne. However, the surge of strikes did not recede. Instead, the protesters became bolder and more confident.

In the following days, workers began occupying factories. It started with a sit-down strike at the Sud Aviation plant near Nantes, then at a Renault parts plant near Rouen, which spread to the Renault manufacturing complexes at Flins in the Seine Valley and the Paris suburb of Boulogne-Billancourt. Workers had occupied roughly fifty factories by 16 May, and 200,000 were on strike by 17th. That figure soared to two million the following day and ten million, or roughly two-thirds of the French workforce was on strike the next week.

The union leaderships did not lead these strikes; on the contrary they tried to contain this revolutionary upsurge by restricting it to mere economic demands. Workers put forward a broader and more radical agenda, demanding the ousting of the President de Gaulle’s government and workers management and control of the occupied factories continued. Despite the trade union leadership’s winning of concessions of huge wage increases and benefits in negotiations with the regime, the workers occupying their factories refused to return to work and jeered their union leaders.

Leaders of the CGT and CFDT were more willing to compromise with the powers that be than to overthrow the state and the system as the ordinary workers were aspiring to accomplish. The workers rejected these offers and the strike went on. Top intellectuals were joining in solidarity. On 27 May 50,000 workers and ordinary people gathered at the Stade Sebastien Charlety. The meeting was fired up by militant speeches demanding the regime’s overthrow and elections held for a workers government.

On 28 May, François Mitterrand, leader of the Socialist Party had to confess: “there is no more state”. On the morning of 29 May, the strongman of the bourgeois and France’s war hero President Charles de Gaulle secretly removed his personal papers from Élysée Palace. He told his son-in-law Alain de Boissieu, “I do not want to give them a chance to attack the Élysée. I have decided to leave: nobody attacks an empty palace.” At 11:00 am, he told his Prime Minister Pompidou, “I am the past; you are the future.”

The government announced that de Gaulle was going to his country home and rumours spread that he would prepare his resignation speech there. But the presidential helicopter never arrived in his Colombey mansion. For more than six hours the world did not know where the invincible French president was. State bureaucracy was panicking. One official asked an aide how far the President’s entourage could flee by automobile should revolutionaries seize fuel supplies. The masses were taking control of the socioeconomic centres. Withdrawing money from banks became difficult, gasoline for private automobiles was unavailable and some bourgeois families tried to obtain private planes or fake documents to flee France. Pompidou soon learned that de Gaulle had gone to the headquarters of the French military in Germany to meet General Jacques Massu, who persuaded the demoralised de Gaulle to return to France; still unsure of the military’s support himself. De Gaulle’s wife Yvonne gave the family jewels to their son and daughter-in-law for safekeeping in Germany, a potential refuge for the Presidential family.

On 30 May, more than half million protesters marched through Paris, chanting: “Adieu, de Gaulle!” (Goodbye, de Gaulle!). It’s a historic irony that the (Communist Party of France) PCF’s leadership opposed the revolution because their “ideologically” belief was that the party must come to power through legal elections, not an armed insurrection. Had the PCF leadership been genuine communists they would have taken a revolutionary path and lead the movement occupying key sectors of the economy and state buildings in Paris and other cities. The army would have inevitably split on a class basis. This was not France during the time of 1871’s Paris Commune. In 1968 the military could have revolted if moved from the provinces to crush the insurrection in Paris.

The revolutionary students and workers were disillusioned as the PCF and UNEF called off workers strikes and students demonstrations. Workers gradually returned to work or were ousted from their plants by the police. The government banned militant leftist students organizations. The PCF leaders agreed to the election and derailed the revolution. A historical opportunity of changing the course of history of Europe and beyond was lost. Yet fifty years later a new workers and students revolt is arising in France. There are plenty of lessons for the new generation of communists and youth to learn from the rise and fall of France’s 1968 revolution, to accomplish a victorious socialist revolution.