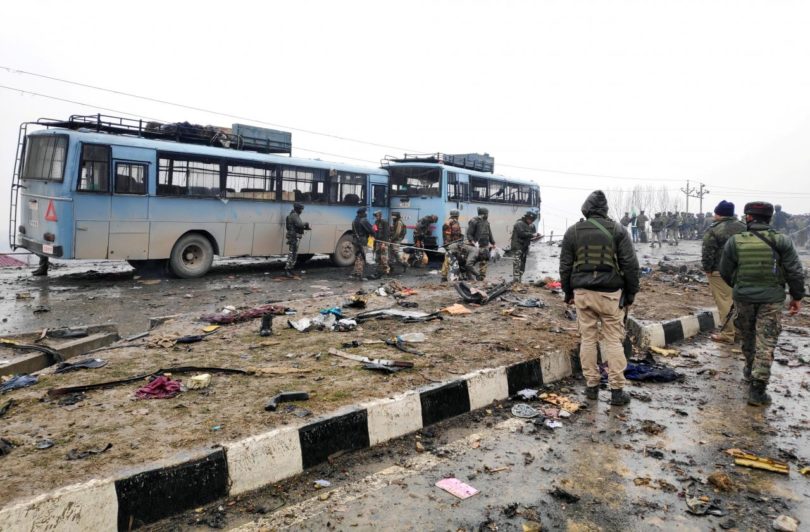 On February 14th, a convoy of the Indian paramilitary police (CPRF) in Kashmir suffered a massive attack with a bomb-laden vehicle, killing 46 paramilitary personnel. The bomber was identified in a video as Adil Dar, a 22-year-old youth from a nearby village. Claimed by Jaish-e-Muhammad, an Islamist terror group, this suicide attack was the deadliest single targeted attack on Indian security forces since the latest episode of the upsurge in Kashmir began in 1989. The immense coverage of this terror attack has completely eclipsed any news or analysis of the mass revolt against the occupation and repression perpetrated on the Kashmiris for generations. This incident once again illustrates that how the ruling class uses such acts of terror to justify the brutality and exploitation that has inflicted intense agony on the ordinary Kashmiri people. Individual terrorism and sectarian violence become tools by which repressive bourgeois states divide the people and crush popular movements with state terrorism. The subcontinent’s states have been fostering their respective religious fundamentalist groups for decades to serve their strategic and financial interests. Most of these sectarian groups are used to sabotage and undermine genuine national and class struggles.

Amid the hysterical outrage whipped up by the corporate media and with national elections coming up in April, Narendra Modi used jingoistic invective to promise a “jaw-breaking response”. After a similar terror attack in 2016, Modi had already conducted revengeful “surgical strikes” across the Line of Control (LoC) in Kashmir. This time, facing probable defeat in the coming national elections, the BJP’s far-right communalist regime is likely to go for an even more vicious reaction, thus creating a dangerous confrontation between the two nuclear-armed adversary states of the South Asian subcontinent. Relations between India and Pakistan have been increasingly jittery over the last few years. Political pundits on both sides of the Radcliff Line had been expecting a relaxation of these tensions following the impending Indian elections. While Pakistan’s deep state was signalling some thawing in relations, the Modi sarkar was behaving more adamantly – perhaps hoping for some similar terror incident which might give it a pretext to come out, guns blazing with chauvinistic rhetoric, to prop up Hindu bigotry and counter the impact of the devastating anti-worker policies that it has inflicted upon the oppressed classes in India during its five years’ rule.

After the attack, the Indian corporate media along with the politicians were quick to emphasise the Pakistani state’s relations to Jaish-e-Muhammad, the group claiming responsibility for the attack. Jaish’s leader is Masood Azhar, who was released from an Indian prison after Islamic terrorists had hijacked an Indian Airlines plane to Kandahar demanding his freedom in1999.  After release Azhar had then set up this religious outfit involved in sectarian and proxy terrorist acts. According to some reports, Masood Azhar is protected by the Pakistani deep state. In 2016 he had opened the new headquarters of the Jaish in his hometown Bahawalpur. India’s foreign ministry has issued a statement accusing the Pakistani regime of propping up Masood Azhar “to carry out attacks in India and elsewhere with impunity.” At the same time, Pakistan’s “close friend” China has obstructed Indian efforts to get Azhar included on the UN Security Council’s list of designated terrorists. However, the Pakistani foreign ministry spokesman condemned the attack but rejected ‘insinuations’ of any link to the Pakistani state.

The partition of the Indian subcontinent was the crime of the British imperialists in connivance with the native elites, political scions of the imperialist-grafted local ruling classes. After more than seven decades, the wounds of this bloodied partition are still festering. Kashmir was torn apart and occupied by the forces of both India and Pakistan. The promised plebiscite never took place and its resolutions still languish in the vaults of the UN. The ruling classes of the two adversary states use Kashmir as a political ploy and an external diversion to whip up nationalistic chauvinism and jingoistic rhetoric, suppress internal dissent and crush mass movements of youth and workers. It’s the ordinary people of Kashmir that have suffered the most. Despite the agony and misery inflicted upon them, they have refused to be suppressed and bravely defied the aggression and state terrorism by the Indian state. Their socio-economic and political predicament across the LoC in Pakistani-administered Kashmir has not been any better. 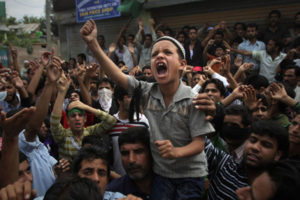 The mass movement that erupted in Kashmir in July 2016 openly defied the subjugation of the Indian state and its military — the fifth largest in the world. The upsurge also refuted the corporate media’s portrayal of the movement as being religiously motivated. This struggle has been about the will and determination of Kashmir’s oppressed people to achieve their national, social, economic and cultural emancipation.

An article on this uprising in Indian Express entitled “Sinking Valley” lays bare their situation:

“Every element of Indian policy in Kashmir lies in tatters. The conflict seems to be going from a deep and violent conflict to a state where there seems to be a death wish all around. Security forces have no means to restore order other than by inflicting death. Indian nationalism is now more interested in showing machismo than solving real problems. There is an increasingly radicalised militancy with almost a touch of apocalyptic disregard for life. We are looking at a situation where our strategy of containment by force has failed, our political instruments are hollow, and there is a deepening death wish in the state. Kashmir is looking at an abyss.”

External interference and terrorism have inflicted heavy blows against the indigenous movement of the Kashmiri masses spearheaded by the youth. With the failure of the UN and the other international institutions masquerading as peacekeepers and saviours of victims of tyranny, armed struggle has become an intrinsic part of the mass uprising. Various religious terror outfits sponsored by strategic interests have been trying to use this situation to the detriment of the movement. The Jaish has rebuilt its network and overtaken two rival religious outfits (Hizb ul Mujahideen and Lashkar-e-Taiba) in these terror activities. This February 14 attack is a mark of their growing activity. Some Kashmiri politicians have acknowledged that armed militancy has now attained a local base, and have pointed to the BJP’s repressive policy and security flaws as contributory factors in this attack. Sheikh Farooq Abdullah, the most prominent pro-India Kashmiri politician, has now come out with an outright rejection of the accusation that Pakistan is responsible for the security lapses and the intensification of the mass revolt. Ever since the installation of the Modi regime in 2014, its communal Hindu xenophobic policies have provoked the mass revolt even more. 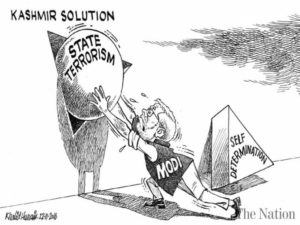 “Terror-related incidents” in Jammu and Kashmir rose by 177% between 2014 and 2018, and deaths of armed forces personnel surged by 94%. Despite the military’s claims of having killed more than 800 insurgents over the last five years, their numbers have been rising, mainly due to the defiance of local youth indignant at the continuing repression and discrimination. Pellets fired by the police have left hundreds blind and others severely injured. Such has been the resentment and political pressure of the movement on Kashmiri politicians that the BJP’s former coalition government with the PDP fell and the toppled elected state government was replaced by direct dictatorial rule from Delhi. The main base and spur for the upsurge are the crippling socioeconomic deprivation, along with national oppression and religious discrimination. The Kashmir valley’s severe and freezing winters have been made even harsher with the prolonged electricity cuts. It is ironic that Kashmir exports hydro-electricity to the rest of India, while its subjugated inhabitants are deprived of this basic necessity. The masses are aware and resentful of their treatment as a colonialized people at the hands of the repressive Hindutva state with its callous imperial designs.

Successive wars between India and Pakistan have failed to resolve the conflict; a negotiated settlement has proved to be a non-starter. There is a new awareness on the part of the youth and ordinary people of Kashmir that the region’s main states and their masters actually don’t want to resolve the Kashmir issue. This ‘irritant’ has become a vital element in their much-needed hostility and diplomatic jugglery. Through this hostility the top military brass of the regions armies enjoys privileged positions, social honour, political hegemony and massive kickbacks in dollars through arms procurement deals with the military industrial complexes’ of the imperialist masters. Above all, the ruling elites use this issue to whip up chauvinism by creating a ‘state of war’ even when they are unable to launch or fight an actual war. The reality is that these rulers can neither go to war nor sustain a durable peace. The Kashmir issue is continuously oscillating from high to low “burners” and vice versa to engineer the theatrics of war and peace. These are contrived to confuse and distract the oppressed, deprived and exploited masses from the real issues of their existence. They use this chauvinistic nationalism to quell and distort the class struggle and perpetuate their odious rule. For generations, this rule of capitalist coercion has brought misery to the region, which has the highest concentration of poverty in the world. The Kashmiri masses have suffered the most bloodletting, atrocities and repression; yet they have revolted and fought with a valour that has given courage and inspiration to more than a billion and a half youth and the oppressed of the entire sub-continent. Paradoxically, it is these very youth and working classes of the region who are the real comrades in arms of the Kashmiri masses in the struggle to put an end to this system of tyranny and oppression. They are not likely to go to a full-fledged war, but the Modi regime can launch more deep and intense surgical strikes or any other belligerent act to use this terror attack to further its games of hatred, extortion, plunder and war. As Lenin once remarked, “ War is terrible – but it’s terribly profitable.”

This terrorist act can have negative impacts on the mass revolt in Kashmir. But the struggle of the Kashmiri masses shall not go in vain. Despite periodic temporary aberrations and travesties, the rulers cannot disorientate or weaken this upsurge. It will re-emerge sooner rather than later. The crucial task is to link and unite this struggle to the movements of the workers and youth throughout the subcontinent. This is only possible if the struggle in Kashmir is recognised as an integral part of the class struggle throughout the region. In the coming period, these struggles of the students of the youth in Kashmir will kindle uprisings throughout India and Pakistan. A revolutionary victory of this class struggle with the overthrow of these coercive capitalist states in any of these countries will light the torch of revolution throughout the region. Such a successful outcome will lead to the formation of a voluntary socialist union of the South Asian sub-continent, in which the oppressed can live in a national, social and economic realm of genuine freedom and emancipation.