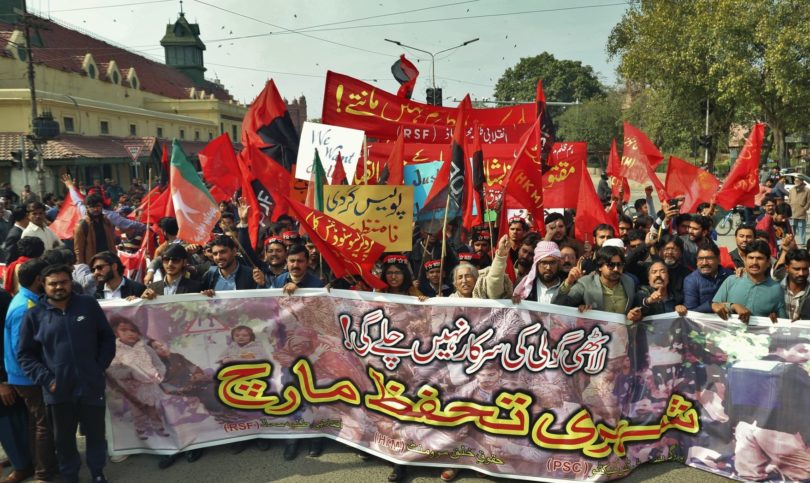 On 19th January 2019, another incident took place at Sahiwal toll plaza that once again shatter the conscious of the masses of Pakistan and also shook the confidence of state institutions as well. On that day, an extension of internal armed forces, Counter Terrorism Department (CTD), bumped into a car, Suzuki Alto, and blindly opened fire on the passengers. The CTD claim that one of them has the association with terrorist organizations (Still, there is no single evidence to support this official claim of CTD). But the bullets killed four passengers including a couple with their teenage daughter. 60 bullets fired by the CTD on the car, but not a single back-fire from the car has been reported. Later, postmortem reports confirm that Khalil sustained 13 bullets, Zeeshan 10, Areeba six and her mother Nabeela Bibi has been fired with four direct bullets. The depth of this barbaric event is much more terrific. There had been a total of 7 passengers in the vehicle. According to sources and eyewitnesses, Car has been bumped first, 4 youngsters have been taken out of the car and bullets were fired. Later, it has been realized that the elder most, Areeba, is young enough to present the testimony before the court. So, she was resettled in the car and again the triggers had been pulled.

In response to this barbaric incident, young comrades from Haqooq-e-Khalq Movement (HKM) staged a protest on the eve of 21st January in front of Punjab Assembly. Despite the heavy rain and cold weather number of comrades reach there and announced to organize a “Shehri Tahaffuz March” (Citizen Protection March) on 10th February and fight for the justice to families of the victims. 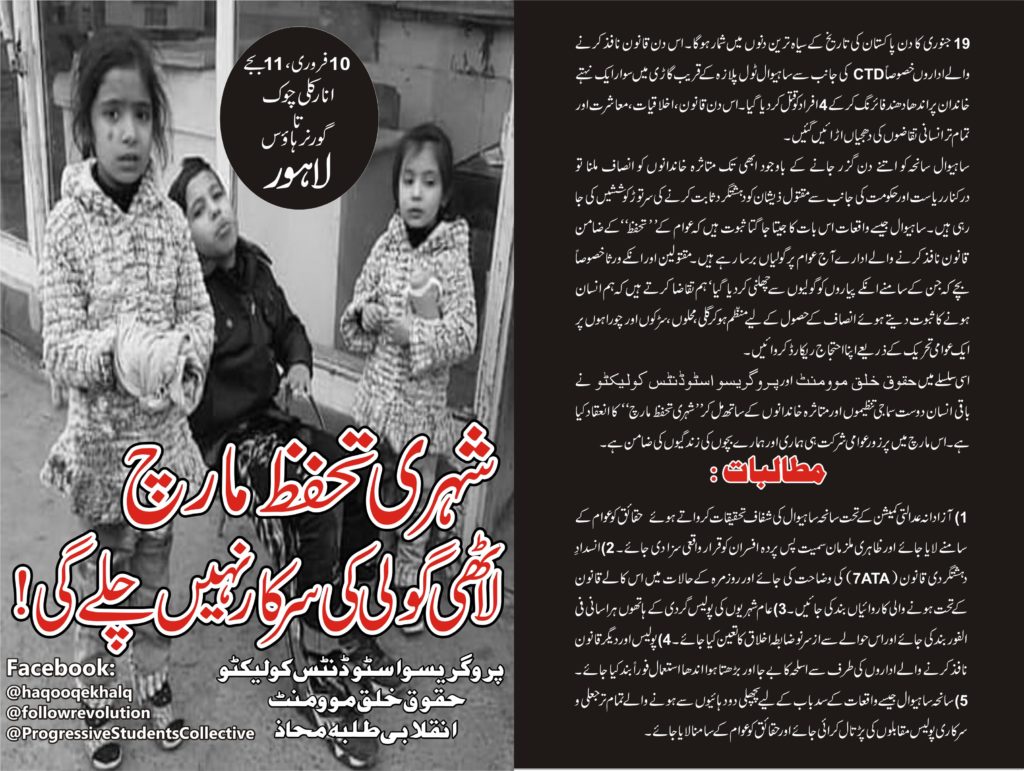 Comrades held meetings with the Families of the victims and campaigned on the street, bazaars, educational institutes, trade unions and courts of the Lahore for the justice. Comrades of Haqooq-e-Khalq Movement (HKM), Progressive Students Collective (PSC) and Revolutionary Students Front (RSF) worked for the nights and days to spread the message of this rally. They pasted posters and hung banners in the freezing cold weather.

The management of the city made every attempt to sabotage the march. Before the March day a professor, Dr Ammar Ali Jan, was arrested from his house at 4 am in morning on a fake FIR. The students and activists gathered at the police station and court. After hours of detention, Dr Ammar granted bail. On the march day, another activist was arrested from his bedroom, the raids had been made in Chungi Amar Sidhu area, where the families belong to, to threaten the people not to join the march. The banners and posters were removed a night before.

But the courage of comrades, students, youth and ordinary citizen made the march possible despite all the odds, threatening calls, detentions, arrests, and the “Shehri Tahaffuz March’” organized by Haqooq-e-Khalq Movement (HKM), Revolutionary Students Front (RSF) and the Progressive Students Collective (PSC) began in the morning of 10th February 2019 from the Anarkali Chowk, Mall Road towards Charring Cross, in front of Punjab Assembly to demand justice for the victims of the fake encounter in Sahiwal. The march was led by the bereaved families.

Participants of the rally demanded that a judicial commission should be immediately constituted to probe the Sahiwal incident. It was also asserted that wide-ranging police reforms need to be initiated if we are to avoid such tragedies and guarantee protection to ordinary citizens.

Speaking on the occasion, Senator Farhat Ullah Babar states that it was essential to re-establish a relationship of trust between the state and citizenry. For that, it is imperative that there be an immediate end to excesses if the state, including extrajudicial killings and the pervasive problem of enforced disappearances. All people should be treated according to the law, rather than taking recourse to illegal use of force. He also expressed solidarity with Professor Ammar Ali Jan and lambasted the Punjab police for harassing a law-abiding citizen.

Farooq Tariq regretted that the law-enforcers first killed the people and then decide whether the target was innocent or not.

Imtiaz Alam took the stage to denounce the increasing culture of fear and violence throughout the country. He asserted that only a grassroots movement can adequately respond to the rapid erosion of civil and social liberties in the country. He also condemned the raid at the house of Dr Ammar Jan.

Brother of Muhammad Khalil (young father killed in the fake encounter in Sahiwal) said that despite promises of getting justice swiftly, the government has failed to show seriousness in investigating the crime or instituting a judicial commission. “In the last 3 weeks, the government has used delay tactics to cover up the unspeakable crime committed against our family. Our brother was a common man and a law-abiding citizen. His wife and his 13-year-old daughter were brutally murdered in broad daylight. His family including his 3 orphaned children will not be silenced until we gain justice. We will call for bigger agitation if our demands are not immediately met.”

The highlight of the rally was the presence of the mother of another victim in the Sahiwal massacre, Zeeshan. She said she has lost her most precious possession at the hands of the CTD. But she said she is fighting for justice not only for her own son but is also fighting for all the other mothers so that no mother ever has to go through the pain and agony that she is going through. She criticized the current government, saying that it seems like it has no fear of accountability in this world or in the hereafter. She said she has firm faith that one day she will see justice. She told the audience that she has lost a son, but that she has all these other sons and daughters who are willing to take a stand.

Youth leaders Haider Butt, Mohiba Ahmed, Zahid Ali, Ahsan Bhatti and Awais Qarni reiterates the commitment of the country’s youth in support of the victims’ families. They declared their commitment to not only fight for justice in the Sahiwal incident but also for the long term struggle of building a fair and inclusive Pakistan. PPP leaders barrister Aamir Hassan and Faisal Mir also spoke on the occasion and announced their support for HKM’s campaign for social justice in the country. Representatives of the National Student Federation and the Young Doctor’s Association spoke on the occasion.