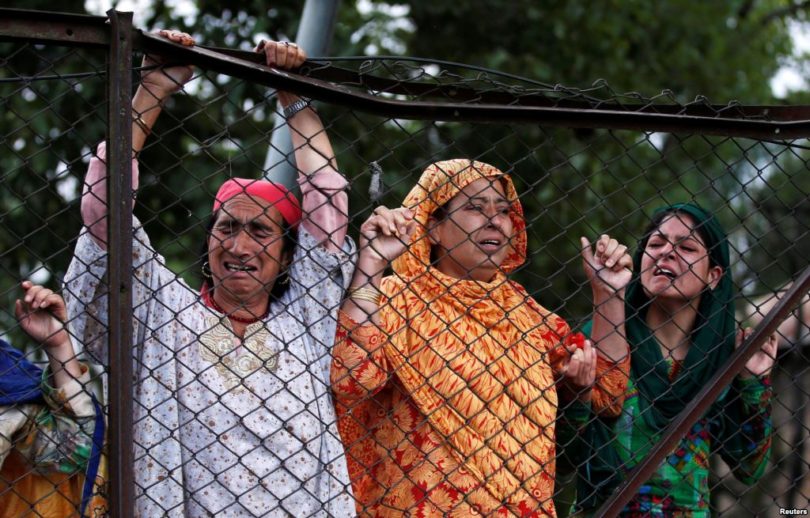 The inhabitants of Kashmir have been in turmoil and struggle against the forces of the state oppression and the non-state actors for generations now. The religious vigilantes and the vile proxies of the Pakistani and the Indian bourgeois states have added insult upon injury to the woes of ordinary Kashmiris. The vale is on fire yet again. For more than 50 days the region is in the throes of a renewed youth revolt with mass protests and an intensifying state brutality. The people in the valley have exhibited a scintillating mass resilience and are out on the streets in a massive resistance.The security forces have killed more than 70 protestors and thousands have been injured. Pellet guns have blinded and maimed hundreds. Yet the central government has not taken any concrete steps to address the situation except to keep sending more forces to exacerbate state repression in the valley.

It is an unprecedented unrest, both in volume and intensity. It is a reflection of huge accumulated rage over the decades. The pelting of stones by younger generation is an expression of disillusionment with the system and the determination to fight back. They want to be heard but their cries seem to be falling on the deaf ears of the ruling elites all over. The response to stones throwing but mainly unarmed protests with firing live ammunition and pellets by the state forces has only inflamed further the already worsening situation. An entirely new generation has entered the arena of struggle, particularly in the last 27 years of a renewed upheaval. Still the slogan of ‘Azadi’, which means an independent Kashmir, has a huge attraction.

The present unrest is unprecedented and is qualitatively a new addition to the decades old movements of defiance. This is the result of deep alienation caused by a long history of broken commitments, repression, socioeconomic woes and denial of justice to the people. The Indian state which initially recognized the uniqueness of Jammu & Kashmir and thereby provided constitutional safeguards under Article 370 of Constitution of India to provide special status to the state. After 1953 steadily the process of centralizing and denying autonomy of the state began. Article 370 was subverted. The constitution application to J&K order of 1954 took off subjects in the union list out of the purview of the state legislature. Following this, there were 42 constitutional (application to J&K) orders extending to the scope of central intervention and laws that were not even envisaged at the time of adoption of Article 370.

The reality is that though at various times promises were made by leaders of the government, not much progress has been made towards a political settlement. Narasimha Rao, the Congress prime minister of India in the early 1990’s, had promised that the “sky is the limit” as far as autonomy is concerned. He could settle for anything less than independence. Deve Gowada, another prime minister proclaiming to be progressive, had also promised ‘maximum autonomy’ during the UF government. Atal Bihari Vajpayee, the BJP’s first prime minister, had promised talks with all within the ambit of Insnaiyat but nothing came out of it either. The problem, which needs an amicable settlement, has definitely no readymade solution within the confines of the present socioeconomic and political system.

During the Vajpayee government, the Indo-Pakistan dialogue began. Under the UPA government the composite dialogue proceeded. During these years various talks were held with the separatist leaders but no progress could be made, as the government of India had no political way-out to offer. The last effort was the round-table talks by the UPA government that did not see the participation of the separatists. Moreover the recommendations made by the working groups formed by the then UPA government also did not see the light of the day. The result is the hike in mistrust and doubts upon the sincerity of the Indian establishment towards Kashmir.

The stand adopted by the BJP government at centre in dealing with Kashmir through the prism of security has been counterproductive both for the people of Jammu and Kashmir and the Indian Union. The progressive forces must demand an immediate end to the regime of repression in Kashmir and the dismantling of the oppressive security apparatus. Keeping in view the extremely difficult situation in the valley, the opposition parties of J&K met the President and Prime Minister of India last week and appraised them of the grave situation in the valley. The delegation which consisted of leaders from National Conference, Congress, CPI(M), PDF and DPN submitted memorandums registering its anguish, grief and sorrow over the painful loss of lives in the Valley in the current unrest and also expressed dismay at the lack of a political initiative to deal with this situation. The delegation also demanded an immediate ban on the use of pellets guns and stopping the use of force and mass harassments. Besides the delegation met vice President of AICC and leaders of CPI(M) as well.

The tried and tested formulations of dealing with the issue in Kashmir administratively has further exacerbated the situation and created an unprecedented sense of disaffection and disenchantment – especially among the youth. The Kashmiri people cannot be held hostage to an India-Pakistan confrontation. There has been a traumatic failure in both countries to bury the hatchet and to arrive at an amicable solution on Kashmir. Perhaps a sustained peace in the region and the solution of the Kashmir problem are not in the interests of the imperialists, political hierarchies and state mavericks of the belligerent subcontinental states. This is the historic failure of the ruling classes of the two countries for which the people of Kashmir are paying with their blood, livelihood and honour.

The most daunting obstacle to the struggle of the oppressed Kashmiri masses is the question of the leadership. Initially the movement was led by the secular democrats of the Kashmiri elite and later on by the nationalists. The bourgeois democrats ultimately compromised with the Indian bourgeois on conditions that could not have been sustained within the existing setup. In the 1960’s and the 70’s the nationalists were relatively progressive and even linked the demand for independence with the overthrow of capitalism. They were also impeded by the internal betrayals and the limitations of the nationalist ideology itself. Several of the later generations ultimately became pawns in the hands of the Pakistani or the Indian states. Their hopes and reliance on the UN and imperialism to get them their ‘liberation’ was bound to end up in despair, retreat and withering away of the nationalist movement. The imperialists that initially inflicted this wound are in no way prepared that this contentious issue that breeds relentless instability and hostility in the subcontinent should be resolved. After all, they have to sell their exorbitantly expensive weapons of mass destruction and continue their hegemony in the region through the policy of divide and rule.

However the failure of the nationalists to take the struggle forward and with the international situation that developed due to the fall of the Soviet Union created a political vacuum where elements of Islamic fundamentalists were intruded mainly by the hostile neighbouring deep state. Other Islamic fundamentalist groups supported by the different world and regional states with their own imperialist designs on Kashmir indulged in this act. But socially and culturally Kashmir was alien to the fundamentalist fanaticism and bigotry. There has been a historic revulsion amongst the ordinary Kashmiris to this bloodshed and violent ideology and methods even if we take a look even at the post 1947 era. That is why Islamic fundamentalism has not been able to attain a substantial mass base in Kashmir inspite of its vast majority being from a Muslim background. The blame game of the Modi regime on Pakistan being the sole cause of the upsurge cannot work as the vast majority of the masses and the indigenous movement is independent of any external control.

Despite the influence of fundamentalism in certain sections of the society in Kashmir, it would be wrong to suppose that there are no progressive and revolutionary voices in this struggle. If extremists are gaining the ground, it is because Delhi continues to be seen reluctant in restoring what it has taken away from the ordinary people of Kashmir. However whether it’s the intruded or the native variety of religious fundamentalist outfits, their involvement in the movements in Kashmir has played a counterproductive and divisive role. Even in the present uprising the Islamic fundamentalists particularly the Jamaat e Islami are in fact impediments to the youth who aspire to fight for their socioeconomic and national rights. The religious vigilantes take the active youth, from different non-religious parties in Kashmir, participating in the struggle, to the mosques particularly in the South Kashmir for indoctrination and ‘purification’. These youth from Muslim backgrounds are under the duress are ‘re-baptised’ or ‘converted’ into the version of Islam that is fostered by these sectarian outfits. Such tactics will inevitably isolate and alienate these religious sects from the Kashmiri oppressed masses.

In South Asia, by contract, the partition did not solve the problem of communalism but made it permanent and bloodied in the form of religious bigotry and terrorism in Pakistan. This has increasingly grown over the years as a furious majoritarianism and poisonous national chauvinism in India.

On the eve of the partition, Jammu was paralysed by communal riots and the people were largely polarized on communal lines, partly as an impact of communal developments in the neighbouring Punjab while as not a single communal incident took place in the valley. But alas that tolerant Kashmir has continuously been targeted by both the reactionary bourgeois nation states. What happens in Kashmir is of, course, a matter of life and death for the Kashmiris but its impacts on the almost one fourth of humanity that inhabits the subcontinent will be of no less importance.

It has also been, from the very beginning a test case for the claims of two nation states and it is in Kashmir that competing claims of territory and beliefs proved the most intractable. The rulers of these states have used Kashmir as a political ploy to crush unrest and class struggles in the domestic domains. The new generation of youth now in the forefront of the struggle in Kashmir links their socioeconomic liberation in par with the attainment of their national and political rights. This is a new dynamic in the present movement in Kashmir. It’s a prelude to linking it with the socioeconomic struggles of the workers, peasants and youth surging in periodic waves throughout this South Asian subcontinent. Ultimately all these movements have to be linked to the class struggle simmering under the surface that erupt periodically in the shape of general strikes, proletarian movements, peasants revolts and youth uprisings throughout the whole region. The unity and a revolutionary victory of this class struggle can be the only guarantee of the emancipation and liberation of the toiling masses suffering from the exploitative system in this subcontinent that inhabits the largest concentration of poverty and destitution in the world.