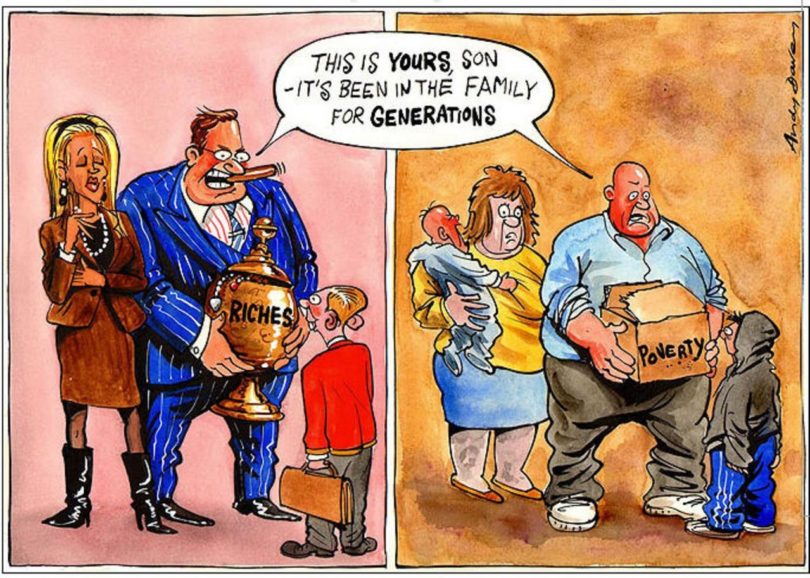 In the last few years, the din of ‘corruption’ allegations by the political and the media pundits’ day in and out has perplexed the ordinary people of this wronged land. Stark reality is that corruption has become a way of survival in present day Pakistan and the masses are wary of the mock proclamations of eradicating corruption. Paradoxically the more corruption is moaned the more pervasive it becomes. The state institutions, feudal lords and factory owners, business deals, supply of basic utilities and mechanisms of the day-to-day life are drenched in the quagmire of this cancerous menace. The ruling elite keeps on plundering, as a privileged upper stratum is shoving the country to the brink of an economic catastrophe.

The latest critique and condemnation of leeching elite comes from no less than the Marc-André Franche, departing director of United Nations Development Programme (UNDP) for Pakistan. In an interview to an English language newspaper he said, “You cannot have an elite that takes advantage of very cheap and uneducated labour for making money, and for partying it is found in London, for shopping it is in Dubai and for property it invests in Dubai or Europe or New York. The elite needs to decide do they want a country or not…I have visited some very large landowners, who have exploited the land for centuries, paid nearly zero money for the water, and how they almost sometimes hold people in bondage. And then they come to the United Nations or other agencies and ask us to invest in water, sanitation, and education for the people in their district. I find that quite embarrassing.”

Franche went on to say “Pakistan will not be able to survive with gated communities where you are completely isolated from the societies, where you are creating ghettos at one end and big huge malls for the rich at the other end. It is not the kind of society you want your kids to live in…the apartheid of opportunities in Pakistan is horrible, which is why so many young people are trying to leave the country.” On the question of the threat of a mass revolt by the oppressed classes, Franche who is no Marxist but could feel the coming threat to the system, “I don’t see those circumstances emerging in Pakistan at the moment. But it will eventually happen in one way or the other. You cannot have a country, where nearly 40 percent of the people live in poverty.”

One doesn’t need testimonies of UN officials or so-called experts and analysts from western financial institutions to understand the stark realities of the society today and the spiralling deterioration of the country’s social fabric. The squalor, misery, poverty and deprivation are excruciatingly painful. The miserable urban and suburban slums and the once relatively clean rural landscapes of the country, littered with filth and degradation, loathe the patterns of the caricatured capitalist development that has ravaged it.

According to 2011 World Bank report, the super elite 18,000 people in Pakistan had a combined income of $1.31 billion or $72,700 per capita. Since the poorest 30 percent of the population’s receives only four percent of the total national income, or only $400 per head per annum. According to the ‘Save The Children’ Global report, “In Pakistan, a large proportion of urban poor live in deplorable conditions. The urban poor are twice as likely to die as the urban rich. The conditions of the rural poor are even worse.” The bias against the oppressed classes is outrageous. According to Tax Reforms Commission (TRC) report, “the poor are subjected to heavy and harsh indirect taxation and the elite are enjoying free perquisites and benefits.”

The rich and reactionary elite has been increasingly moving away from investments in industry and manufacturing. Today’s richest of the rich are those who are the barons of black capital that is accumulated through crime and corruption. One can easily ascertain the culture and character of these tycoons with undisclosed wealth who are the new mafia bourgeois, subduing the politics and the state in an economy of dearth. The terrorist outfits and criminal gangs have been created through this huge black capital to violently enforce their securities and protect wealth come what may.

A large element of the former industrial bourgeois has shifted to the services sector particularly in the health, education, power, water and real estate sectors to extort fast and massive rates of profits that can be transferred opaquely to their accounts and investments elsewhere. In a period of relative lull, they flaunt their crude wealth to further insult and stultify the deprived toiling classes. The transformation of the Pakistan’s bourgeois from a position when it desired to set up a modern industrialised society at its inception to this current degenerate into Mafiosi capitalists exposes its desperation and loss of faith in the system and future of the country they rule.

These vultures have already set up their escape plans in wake of a mass revolt by setting up their businesses and palatial mansions in Dubai and elsewhere. These rogue elites indulged in crime and plunder are mercilessly ravaging the country, are squeezing the working classes and the poor with super exploitation of its labour to maximise their ill-gotten wealth.

The serious western and native bourgeois experts are worried about the ferocity of the revenge of the oppressed classes. Their fears are very much real. However Pakistan’s corrupt and obtuse ruling elite is either ignorantly trying to elude the thought of the coming historical retribution or have consciously accepted their failure to develop society and are preparing to flee the vengeance of the impending revolt of the toiling masses. But their story is over. For their survival the workers and youth have no option to rid this vicious and rogue ruling class that is historically doomed and economically bankrupt. The task of the new generation of the working classes is to transform the socioeconomic system into a planned economy owned and run through collective democracy controlled by all in society.