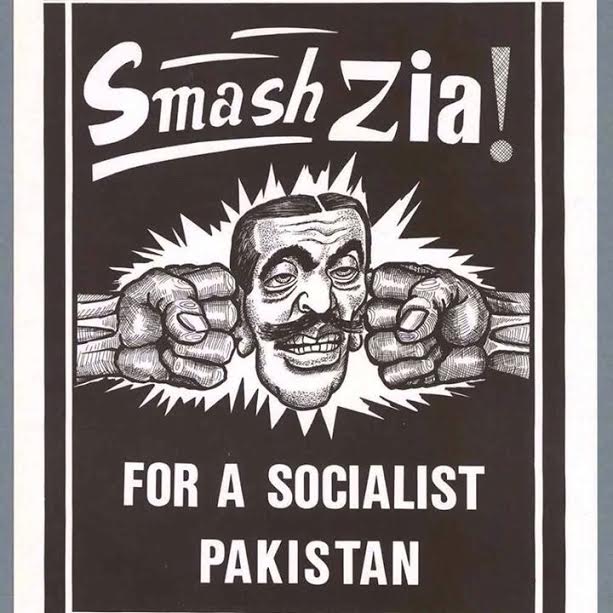 Forty years ago this week, Pakistan’s impoverished, dispossessed and deprived masses were struck by one of the most brutal, cruel, repressive and reactionary military dictatorships the country has ever seen and pushed the country and society in the throes of repression, terror, poverty, disease, misery and agony. On July 4th, 1977 Pakistan suffered a bloody military coup, the scars of which are festering today. The coup led by General Zia ul Haq brought in the most vicious and brutal regime ever in the country’s history. The country’s elected Prime Minister Zulfiqar Ali Bhutto was deposed and incarcerated.

Gen Zia and his coteries unleashed an orgy of unprecedented violence and brutality against the oppressed classes of Pakistan. Thousands were flogged and lashed publicly; hundreds were strung to the gallows and tortured in the notorious centres of state repression and incarceration. The main targets were the left wing and PPP activists, trade unionists, workers, poor peasants, oppressed nationalities, women, religious minorities and sects and downtrodden sections of society. There was a spate of massacres, from the mass killing of the workers of the colony textile mills in Multan in 1978 to the genocide of the peasants and youth during the 1983 movement in Sind. 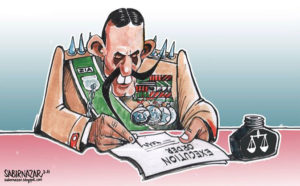 The repression of the regime rather than suppressing the opposition ended up bolstering trade union and PPP activists and its leader Zulfiqar Ali Bhutto, who gathered thousands at his rallies on his release from prison. There is no doubt the military and the US imperialism were alarmed by the developments on the ground and both moved very swiftly to fabricate and engineer a political show trial leading to political and judicial murder in the middle of the night on the 4th April 1979 of the elected prime minister of the country. This was the dreadful day when Zulfiqar Ali Bhutto was hanged by Gen Zia with the open complicity of a slavish judiciary and the US imperialism. It is no secret that the US imperialism was calling the shots behind the scenes and sponsored this Islamicist general to perpetrate this atrocious act.

These harrowing atrocities were, in fact, the revenge of the Pakistan’s ruling classes and the state against the workers, peasants and the youth of the country who had dared to revolt against Gen Ayub dictatorship and the exploitative order and the system. This young proletariat challenged the relations of property and ownership of wealth, land and the means of production of Pakistan a decade earlier. Bhutto, who came into power on the crest of this revolutionary upheaval of 1968-69 and was forced by the pressure of this movement to bruise sections of the ruling elite through a programme of nationalisation, was chastened and executed on the gallows in an act of sinister judicial murder with a vengeance.

Art, literature, music, culture, cinema and social life as a whole were strangled by the obscurantist repression of the Zia regime and his acquiescent neo-fascist accomplices Jamaat–e-Islami and its student and paramilitary wings. However, most industrialists and landlords were ecstatic. Not only were they handed back the industries nationalised by Bhutto with substantial compensations, but also the military dictatorship imposed cruel pro-capitalist policies including the crackdown on trade union rights and activities and eroding hard-won gains during the Bhutto and PPP rule. 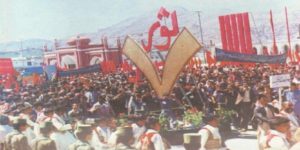 All this was done in the name of Islam. US and European imperialists endorsed this vicious dictatorship and encouraged these anti-people policies. What really turned the tide for Zia dictatorship were the revolutionary developments in Afghanistan where in 1978 Saur Revolution swept across the central Asian country uprooting backward social and property relations and liberating women from domestic slavery, abuse and extreme oppression. The revolution quickly moved to establish the Democratic Republic of Afghanistan, with a Revolutionary Council at its head, and a provisional democratic program that guaranteed the legalization of trade unions, equal rights for women and the separation of religion and state.

The present day exhortations of US and western imperialists of democracy, human rights and freedoms reeks of hypocrisy and deceit. The US and Western imperialist countries were alarmed with these developments from the very onset of these revolutionary developments, they began to provide covertly logistic, financial and military aid to these reactionary so-called mujahedin outfits, the CIA sending them money, guns, bombs, advisors, special agents and the like through Pakistan and hence open and full embrace of Gen Zia and his crimes against Pakistani citizens. They began a renewed counterrevolutionary Islamic terrorism under the auspices of the Zia regime to foster their vested interests in Afghanistan, the region and beyond. The Jamaat-e-Islami along with the other religious sectarian parties played the role of a malicious collaborator in the dictatorships atrocious crusade against the left and revolutionary forces. They spied on the workers and students in the resistance and were accomplices in their arrest, torture and murder.

Zia justified the imposition of his brutal and oppressive martial law in the name of sharia, to Islamise the Pakistan society. He did this to appeal to the primitive layers of the society particularly the petty bourgeoisie to gain their support for his regressive and reactionary policies and actions. He began to impart upon the country with a pre-medieval theocratic state. In December 1981 he had said, “Pakistan is like Israel, an ideological state. Take out Judaism from Israel and it will collapse like a house of cards. Take Islam out of Pakistan and make it a secular state: it will collapse.” The western imperialists were enthusiastically endorsing his reactionary crusade.

Official religiosity was imposed in the army, bureaucracy and institutions of the state and society. Jamaat and other religious parties infiltrated their cadres in the state institutions, from the judiciary to the armed forces. Its impacts on today’s Pakistani society are starkly stained and brutalising. Zia’s contempt and indifference to the woes of ordinary people for the working classes were ferocious: “Any increase or decrease in your sustenance comes from him. Trust in God and he will bestow upon you an abundance of good things in life.”

Similar to the despots and dictators of the past, state power and religious frenzy drove Zia into a state of insanity. He had the delusion of hoisting the crescent and star throughout the Central Asia and beyond. Zia was even showing elements of arrogance and insolence towards his imperial masters. In 1985, Mikhail Gorbachev became the leader of the Soviet Union and was faced huge economic and political problems throughout the Soviet Union and was beginning to crumble under the weight of internal contradiction and the suicidal policies of its bureaucratic leadership. Under these massive problems, Gorbachev and his bureaucratic elite were keen to settle with the imperialists who themselves were also keen to scale down their presence in Afghanistan. However, Gen Zia’s megalomania was becoming a grave liability for the Americans. The explosion of the C-130 Lockheed plane carrying Pakistani top generals along with US Ambassador Arnold Raphael, other diplomats and military officials on August 17, 1988 was perhaps an act of desperation for the American but it was an accident atoning an imperialist necessity.

Four decades later his malignant legacy dominates the state, society, ethics, morality and politics of Pakistan. His injection of the Kalashnikov culture, drug smuggling, addiction, terrorism, reactionary social attitudes, discrimination of women and religious sectarian venomous hatred in society have metastasised in these long dark years since the bestial Zia dictatorship was imposed. When Zia came to power about 5 percent of Pakistan’s economy was ‘parallel’ or black economy. Now the figure stands at 73 percent. This is mainly based on crime, terrorism, real estate forgeries, corruption, extortion and blackmail. This black economy is a huge buffer that salvages Pakistan’s formal economy from a total collapse. It also provides a majority of unskilled jobs in the country and these criminal bosses impose some of the most daunting working conditions for the toilers. The obscene wealth of the drug barons, terrorist clergy, property tycoons, the top brass of state structures, politicians and venture capitalists make up this black capital that has become a huge tumor devouring the physique of Pakistan’s society. It controls the political parties, state institutions, mafia networks and the religious sectarian brigades providing them licenses of piety and protection in the name of faith to the ruling elites. 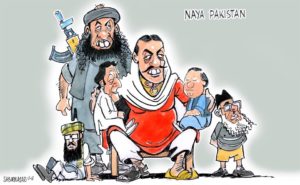 The Islamic parties were Zia’s partners in brutal repression. The MQM and other ethnic based groups were promoted and protected by agencies under his command to fracture the class unity of the workers, especially in Karachi, the bastion of the Pakistani proletariat. The current leaders of all the Muslim leagues were and are his protégés. But the most ironic position is that of the PPP where several of Zia’s political acolytes, including Rehman Malik and Yusuf Gillani, are the stalwarts of today’s party. It is not just a question of the individuals but the policies of the tyrant that continue to pulverise society. The blasphemy law, the Hadood Ordinance and other draconian laws against women and the oppressed are flourishing. None of the subsequent pseudo-democratic regimes have been able to repeal them. Nor can they in this socio-economic setup.

The religious based terrorism that Zia fostered to destabilise and bring down the revolutionary government in Kabul and destroy the Afghan revolution was at the behest of funding by the US imperialists and the reactionary Gulf monarchies. Four decades later this monstrosity of fundamentalist terror is ravaging South Asia, the Middle East and its lethal tentacles are spreading as far as Europe, America, and China and across the planet. Zia’s legacy is basically the intertwining of religious fanaticism with the accumulation of primitive capital and using this reaction and mayhem to demoralise the working classes, weaken and rupture the class unity and violently crush their struggles in for the perpetuation of capitalist rule.

Moneyed democracy was used to deviate and distract the class struggles after the fall of Zia. The main reason that the imperialists eliminated him, his almost entire military top brass in the shape of core commanders and alongside their own ambassador was the real fear of the tyrannous rule of their stooge was becoming a provocation for the masses to rise in a revolutionary upheaval that would be a threat to the whole system. Western imperialism and Pakistani capitalist class could not afford another revolutionary movement on the scale of 1968/69. The so-called democratic rulers were only allowed into the corridors of power as long as they danced the tunes of imperialism and the Pakistani military establishment. This also applied to the Benazir Bhutto’s PPP government as well as handpicked, shaped and trained politicians by the military like Sharif and others.  These civilian politicians have continued his reactionary policies, as the basic motive of a dictatorial of a democratic rule under the financial oligarchy of capitalism is to preserve and continue this exploitation and coercion of the working masses. Zia’s legacy is to secure the capitalist rule in the garb of religion. Under a democratic or secular rule the masks change but the system they preserve remains the same. 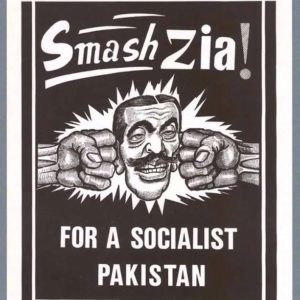 Poster Published by “The Struggle” in 1983

The rotten Pakistani capitalism has created obscurantist state and social attitudes and culture practiced mainly by the petit bourgeois but imposed upon society by the reactionary corporate media and the intelligentsia that has hardly shifted from the stances they had under Zia. The whole politic body of the system is permeated with Zia’s legacy. This harrowing social, economic, cultural and ethical reaction is based on a rotting socioeconomic system. Without its overthrow and transformation, the society cannot be emancipated and salvaged from oppression. The night of brutality and reaction that darkened society four decades ago in July 1977 can only be obliterated by a red dawn of the revolution.