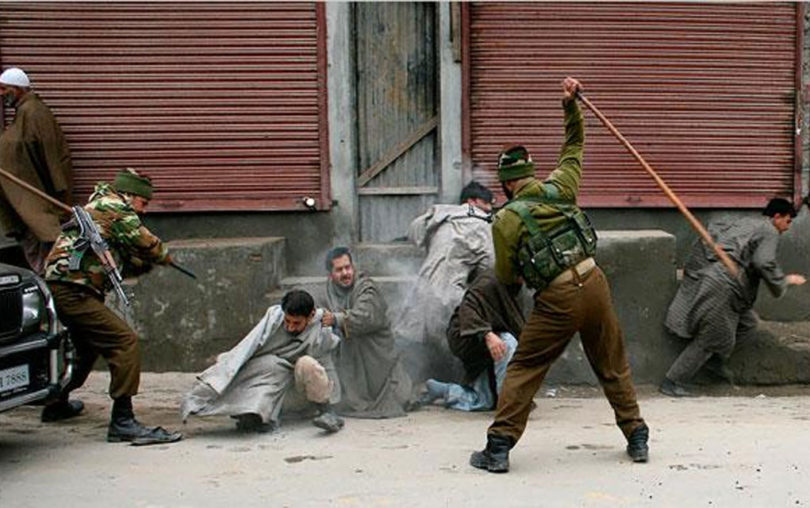 Kashmir valley continues to be on boil and the volatile situation is yet another grim reminder of the failure of Narendra Modi-led BJP government at the Center to address genuine political aspirations of the people. While in last three years, Modi has failed on all accounts on his promises made to the voters in 2014 elections, the policies of RSS and its prodigy BJP on Kashmir have been focused to muzzle the voices of dissent with brute force. This has further deepened alienation of Kashmiris and especially youth, who are at the forefront of the uprising in Kashmir. As the anger, alienation, and protests have swelled, so has the disproportionate force of the state.

Youth at the forefront of the prolonged unrest, which has consumed more than hundred civilian lives since last July, is a worrisome situation for all, sans New Delhi. The new generation of youth, being now on the forefront of the unrest is a new dynamic in the present turmoil in Kashmir. It is a new addition to the decades-old movements of defiance. This is the result of deep alienation caused by a long history of broken commitments, repression, socio-economic vows and denial of justice to the people.

It could be easily said that reluctance of the oblivious government to respond the emerging situation political and inept handling by the Center has worsened the political and security scenario of the Valley to an extent where even holding a by-poll has become a Herculean task.

In the aftermath of Burhan Wani’s killing by the security forces, the widespread protests by the youth in Kashmir Valley were, in fact, an expression of the latent anger and deep resentment against the total neglect of the Kashmir issue by the Modi government. Burhan Wani’s killing was just a trigger: it simply ignited the fuel of suppressed sentiments and the “illegitimate” alliance between PDP and the BJP.

It is noteworthy that while PDP had sought votes on the restoration of state’s autonomy and resolution of Kashmir issue by initiating a dialogue with the separatists and Pakistan, the BJP had promised its Jammu constituency that it will ensure the effacing of what remains of autonomy and abrogation of Article 370. The people of Kashmir, who had voted for PDP felt betrayed and found an opportunity of giving vent to their anger. The PDP-BJP coalition’s “Agenda of Alliance” became, especially in its promised political contents, first a farcical and now a tragic dead letter. 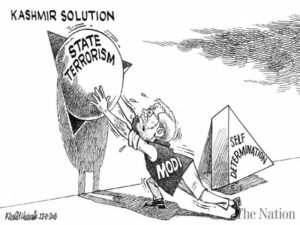 Instead of realizing the blunders and trying to reach to the people, the regime used unbridled force and resorted to indiscriminate pellet firing, tear gas shelling, lathi charges and even direct target firing. The Government is seen commending its forces for using excessive force against the protesters.

And when the situation was relatively calm this year after turbulent latter half of 2016, Farooq Ahmad Dar of Chillbras Budgam, who had dared to trust in democracy on April 9 during by-poll to Srinagar Lok Sabha seat, was betrayed with oppression. An Army major tied him with a jeep and paraded him in 17 villages as a human shield. And this act of absolute oppression was condoned by the Defence Minister Arun Jaitley and the Army Chief. The subsequent statements of Jaitley that “Army officers are free to take decisions in a war-like zone” and Army Chief General Bipin Rawat’s “dirty war in Jammu and Kashmir has to be fought through innovative ways” is a symbolic illustration of how the BJP government is wantonly violating the fundamental and constitutional rights of Kashmiris.

There has also been an aggressive invasion of Sangh Parivar’s violent discourse on Kashmir with Modi alternating between platitudes like “Terrorism or Tourism”, “Laptops instead of stones”, “Vikas aur Vishwas`.” However, in reality Modi’s approach towards the political problem of Kashmir and pain of its people is one of total apathy and indifference. The aggressive posturing of RSS and BJP on Kashmir is exacerbating the already prevalent anger and alienation in the Valley which could have disastrous implications in future. BJP MP Subramanian Swamy’s suggests that the Valley should be de-populated and Kashmiris sent to refugee camps in Tamil Nadu to curb protests in the state and Vishwa Hindu Parishad leader Pravin Togadia’s demand that the government carry out “carpet bombing” in Kashmir Valley to stop the attacks on security forces by militants.

BJP President Amit Shah’s claim that Kashmir is a problem of “three and a half districts”, and the central government was formulating a “course of action” to resolve the situation is highly provocative. Union Home Minister Rajnath Singh’s assertions that they have found a “permanent solution” to the vexed Kashmir issue, one fails to understand when the government seems to be reluctant in holding dialogue with voice of dissent and banning use of deadly pellet guns, what kind of solution it can offer to resolve this complex issue. Is this on the same lines as envisioned by the RSS in its June 30, 2002 resolution in its national executive meeting held in Kurukshetra, where it demanded that Jammu and Kashmir should be divided into three parts – Jammu, Kashmir and Ladakh. Bifurcation or trifurcation of the state on communal lines is fraught with disastrous consequences not for the state but for the entire region. It will cement permanent walls of hatred among different communities.

To muzzle the voices of dissent, the BJP government’s response has been repression and jingoistic nationalism. This jingoistic-nationalist agenda of BJP on Kashmir and Praja Parishad’s provocative agitation and raising the divisive slogan of “Ek Vidhan, Ek Nishan aur Ek Samvidhan” (one country, one emblem and one constitution) continues to form the Saffron party’s political approach on Kashmir.

Treating the present unrest and turmoil in Kashmir, as the offshoot of “Pakistan-aided terrorism” and dealing with it by muscle power alone, has proved counterproductive. It has resulted in hopelessness, despondency and total loss of confidence in the political establishment. Due to the hyper-nationalist approach of the Modi government, the pro-Pakistan narrative which was noticeably weak has also become apparently strong in the recent times in Kashmir. The muscular policy of New Delhi is encouraging extremism. It won’t be out of context to mention here that due to muscular policy, India is perceived to be losing Kashmir psychologically and emotionally.

The recent Srinagar by-poll which saw a mere 7% voter turnout should have served an eye opener for New Delhi, keeping in view the heavy turnout in 2014. The lowest ever voter turn-out in recent by-polls to Srinagar parliament seat and cancelling the by-poll to Anantnag seat is a signal for New Delhi for serious introspection.

It seems that Narendra Modi and his associates in RSS and BJP have an eye on 2019 Lok Sabha elections and want to use Kashmir crisis for polarizing affect to gain electorally. Since Modi and his associates have been successful in U.P by polarizing and communalizing the situation and have given great hype to the “surgical strikes” across the Pakistan border, they feel that the audacious display of curbing protests in Kashmir, refusing to talk to separatists and avoiding dialogue with Pakistan will surely pay them. They also think that it will be seen as a victory for ultra-Hindu nationalism. Needless to say that the Hindu-isation of politics on the national level by RSS-BJP combine and the formation of cow protection vigilante groups and the persecution of Muslim minority on the pretext of cow protection has added fuel to the fire in J&K which happens to be the only Muslim majority state in India.

It is the high time that the Prime Minister, who is stubbornly mum over Kashmir situation, initiates some confidence building measures which can be a prelude to dialogue in order to douse the flames. The starting point should be for Delhi to recognise and concede publicly that the struggle in Kashmir needs to be dealt through negotiations and not through repression.

It is a reality that at various times promises were made by governments in Delhi with Kashmir, but not much progress was made towards a political settlement. Narasimha Rao, the Congress prime minister in the early 90’s, had promised that the “sky is the limit” as far as autonomy is concerned. He could settle for anything less than independence. Deve Gowada, another prime minister proclaiming to be progressive, had also promised ‘maximum autonomy’ during the United Front government. Atal Behari Vajpayee, the BJP’s first prime minister, had promised talks with all within the ambit of “Insaniyat,” but nothing came out of it either. The problem, which needs an amicable settlement, has definitely no readymade solution within the confines of the present socio-economic and political system. During the Vajpayee government, the Indo-Pakistan dialogue began. Under the UPA government, the composite dialogue proceeded. During these years several rounds of dialogue were held with the separatist leaders but no progress could be made, as the government of India had no political way out to offer. The last effort was the round-table talks by the UPA government that did not see the participation of the separatists. Moreover, the recommendations made by the working groups formed by the then UPA government also did not see the light of the day. The result is the hike in mistrust and doubts upon the sincerity of the Indian establishment towards Kashmir.

The tried and tested approaches to dealing with the Kashmir administratively has further exacerbated the situation and created an unprecedented sense of dis-entrenchment especially among the youth.

The democratic forces of the country should raise their voices to force the BJP government to acknowledge the ground realities in Kashmir and take bold initiatives to address the long pending legitimate rights of the people. Kashmiris have to be won over and for that to happen, an unconditional offer to undo the historical wrongs and initiate a meaningful process of all stakeholders, including the voices of dissent and Pakistan. History is a witness that there is no other way than to explore ways to resume the dialogue with Pakistan. Whatever the circumstances, war is no solution. Voices demanding settling accounts with Pakistan through military means should be rejected. India and Pakistan have a shared past and both the countries must realize they have to move together for a better and peaceful future. For a meaningful breakthrough in their relations, political will is needed, which, unfortunately, is missing at the moment.

Kashmiris don’t want to repeat tragedies. They want a better future for their children. They want peace and development. But of course not at the cost of their dignity.

M.Yousuf Tarigami is member of the Jammu and Kashmir Legislative Assembly, and Member Central Committee, Communist Party of India (Marxist)