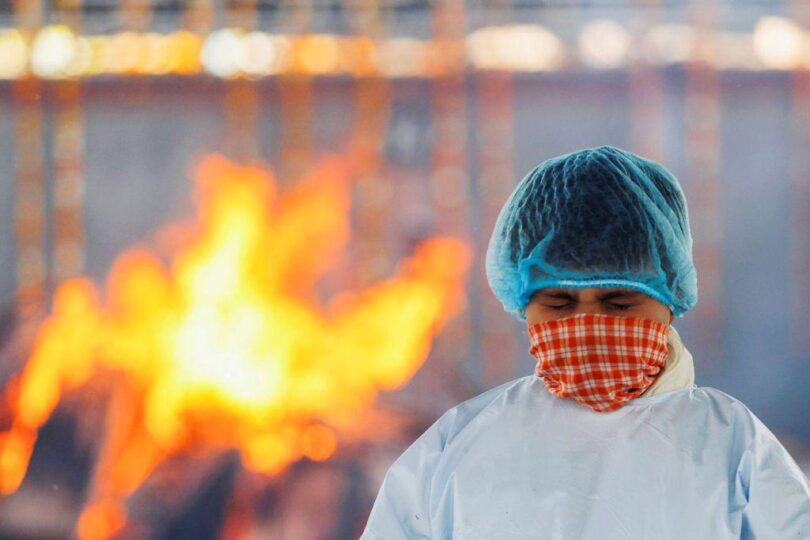 India has been gripped by a new Coronavirus variant that has wreaked havoc in the second largest country on earth. On Saturday, 1st May, India became the first country in the world to cross the threshold of 400,000 daily new cases with 3689 deaths. The grim picture of an elderly Indian woman with oxygen cylinder on the road outside a hospital choked with Covid patients, with no more beds available, exposes the utterly criminal character of Indian ruling classes regardless of their partisan affiliation. The disastrous second wave of Covid-19 has dissipated the braggadocio of Prime Minister Narendra Modi who in January this year boasted of having not only defeated Coronavirus but also saved the world. In September last year a committee established by the Indian government to combat the pandemic published a report to the effect that the Indians had already achieved the herd immunity and it was assumed that Indians were exceptional due to their genetics or prior exposure. The neo-Fascist BJP’s health minister even recommended consuming cow’s urine to cure Coronavirus infection. Such idiotic assumptions coupled with a broken health system mired in corporate greed, all contributed to the present mayhem which is further tormenting the already impoverished Covid-stricken Indian masses now languishing on the roads. 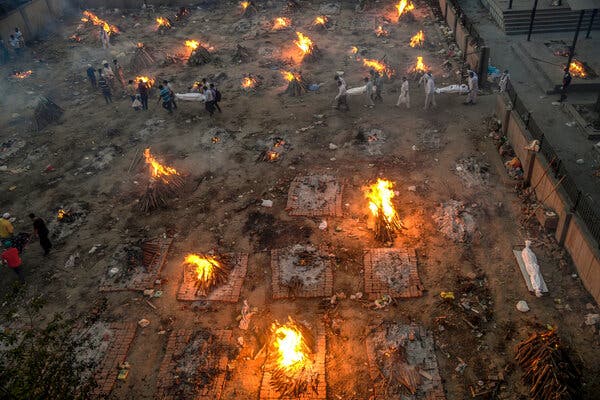 Crematoriums have been choked and run out of firewood due to ever increasing dead bodies being brought for cremations. The forest department has granted special permissions to cut down trees to arrange wood for cremation. Parks and parking lots are being used as makeshift crematoriums.

According to a Reuters report, the Indian scientists had already warned the government in early March of a new and more contagious variant of Corona virus spreading in the country but the government paid no heed to the warnings and instead continued with the foolish assumptions of India having already defeated the virus. Despite being the largest producer of vaccine in the world, the country is still lagging behind in vaccination with just 11 per cent of the population vaccinated so far.

On the one hand the country is reeling from acute shortages of all medical facilities including oxygen supply; on the other the BJP-ruled state of Uttar Pradesh, one of the worst effected, is reporting “all is well” and has threatened anyone reporting the lack of medical facilities in hospitals with arrests and legal action. The BJP goons are silencing every voice questioning their criminal negligence. The right-wing fascist Rashtriya Swayamsevak Sangh (RSS) has issued a statement warning that “destructive and anti-Bharat forces in society can take advantage of these circumstances to create an atmosphere of negativity and mistrust in the country”. It further asked media to foster a “positive atmosphere”.

Many media outlets and their ground reporters have questioned the authenticity of official numbers of daily infections and death, claiming them to be sheer underestimation. Interviews from workers of cremation grounds, where fire never stops these days, in different parts of the country paint a wholly different picture. It is believed that the hospitals in connivance or under pressure from the government are underreporting the death toll. Bhramar Mukherjee, an epidemiologist at the University of Michigan who has been following India closely said, “It’s a complete massacre of data. From all the modelling we have done, we believe the true number of deaths is two to five times what is being reported.”

The current wave of Covid-19 has choked the already broken healthcare system of India. In the name of reforms consecutive Congress and BJP governments both kept dismantling the already meagre healthcare infrastructure that existed. Officially, India spends 1.25 per cent of its GDP on healthcare but according to the research conducted by Dipa Sinha of Ambedkar University Delhi, this figure is misleading, and the real figure stands at a measly 0.34 of GDP. In the same research we find that India ranks 145 out of 180 countries on quality and access to healthcare and 179 of 189 countries prioritization of health in government budget. From 1990, when neo-liberal economic reforms began, to 2010 the public health spending stagnated between 0.9 per cent to 1.2 per cent of GDP. These reforms and subsequent privatization of health sector have proved to be a nightmare for the poverty-stricken masses. A Lancet Study in 2016 shows that 78 per cent of the healthcare in urban areas and 71 per cent in rural area are now controlled by private sector. The privatization of healthcare has led to skyrocketing of health costs. According to an estimate, 40 per cent of people who are hospitalized are submerged into lifelong debt or pushed below the poverty line due to high costs of medicines and treatment. India’s Economic Survey 2013 has estimated that every year high cost of health expenditure forces 39 million people into poverty. In 2017, Out-Of-Pocket (OOP) health expenditures drove 55 million people into poverty.

The priorities of Hindu fundamentalist BJP government have been exposed by Indian activist Aundhati Roy;

“There is no hospital in Kevadia. There’s only the Statue of Unity, built in the likeness of the freedom fighter and first deputy prime minister of India, Sardar Vallabhbhai Patel…. At 182 meters high, it’s the tallest statue in the world and cost US$422m.”

Ever since the beginning of Corona pandemic the right wing BJP government, instead of fighting the virus with emergency health measures, has been manipulating the pandemic as a divisive tool for its communal politics. Muslims were held responsible for the spread of Coronavirus. They were routinely harassed and taunted. The BJP officials openly labelled Muslims as “human bombs” and accused them of “corona jihad”. The sheer sectarian nature of Indian government was laid bare when despite all warnings from health experts it allowed the Hindu religious festival of Kumbh Mela beside the river Ganges where more than 3 million people converged from all across India. Medical experts are of the opinion that this festival might have fuelled the spike in new Covid-19 cases. These conventional divisive tactics are meant to hide the sheer incompetence, negligence and the indifference of the Indian ruling classes towards the plight of the masses. They are more concerned with the profits of corporations and big businesses who are the real bosses that brought Modi to power.

India had enough time to prepare for the second wave and make necessary arrangements. Instead of preparations and improving healthcare facilities for future pandemics, the Indian Prime Minister declared victory over Coronavirus and put the nation in a celebratory mode. In January this year, while speaking at a virtual meeting of World Economic Forum he claimed, “In a country which is home to 18 per cent of the world population, that country has saved humanity from a big disaster by containing corona effectively.” The BJP passed a resolution in February praising Modi for his “leadership for introducing India to the world as a proud and victorious nation in the fight against COVID-19. It can be said with pride that India defeated COVID-19 under the able, sensitive, committed, and visionary leadership of Prime Minister Narendra Modi.”

The sheer nonsensical and idiotic leadership of the largest democracy in the world is actually an expression of the deep crisis of Indian capitalism. There was a time when Indian capitalism was led by the likes of Jawaharlal Nehru who had at least a semblance of bourgeois aspirations to develop India into a modern capitalist state. But according to Leon Trotsky’s Theory of Permanent Revolution the bourgeoisie of the colonial or ex-colonial countries are utterly incapable of developing the society and carrying out the bourgeois democratic tasks of bourgeois revolutions due to their historical belatedness. Over the decades, India has been further drowned into economic inequality and social crisis increased. Despite all intriguing figures of economic growth, the poverty and misery have deepened in the last decade. According to Oxfam India report of January 2020, the richest 1 per cent in India possesses more than four-times the wealth held by 70 per cent (953 million) of the country’s population. The sheer wealth gap is a recipe for chronic social crisis. The rise of BJP is an indication that classical Indian bourgeoisie has lost the battle for the establishment of a modern capitalist state. The ruling classes are more than ever reliant on instigating religious hatred to perpetuate their crisis-ridden rule. Initially, the pandemic seemed to give the Modi government a lease of life by providing an excuse to crush the mass movement against the discriminatory Citizen Amendment Act CAA, but now the same pandemic is exposing the callous attitude of this neo-fascist government. The Indian working classes have always displayed their will and power to change society, but the traditional left leadership has failed them time and again by failing to provide a program of socialist overthrow of capitalism in India. Only a socialist overthrow of Indian capitalism can put an end to the rule of criminal capitalists who are an impediment to the development of society.