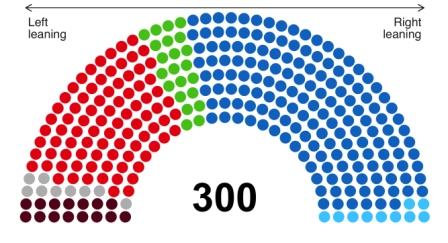 So the full circle is completed.  The corrupt pro-business conservative New Democracy party in Greece that was ousted by the anti-capitalist Syriza party in 2015 has been returned to office in yesterday’s general election, with an outright majority over all other parties.

New Democracy party got just under 40% of the votes cast. Syriza under Alexis Tsipras got just under 32% of the vote. The voter turnout was just over 57%, the lowest rate since the end of military rule in 1974, suggesting huge disillusionment with all parties.  The Syriza vote share was down only 3.5% from the last election in 2015, but the New Democracy share rose from 28% to 40%. The small parties (including the Syriza left breakaway parties) did poorly, although the former PASOK social democrats increased their share from 6.3% to 8% and the Communists were unchanged at 5%. Also a new party MeRa25, set up by former Syriza finance minister Yanis Varoufakis, got over the 3% threshold and will have MPs for the first time.  The neo-fascist Golden Dawn failed to make it.

The last four years of the Syriza government have been both tumultuous and saddening.  Elected to oppose the policies of the Troika (the ECB, IMF, and the EU) in imposing vicious austerity measures on Greeks in return for ‘bailing out’ its banks, foreign banks and government debt, Syriza at first resisted the Troika.  Under Tsipras and Varoufakis, it searched for a deal with the Euro leaders that would not impose the austerity.  When such a deal was rejected by the Troika and the Euro leaders led by Germany and the Netherlands, Tsipras called a referendum on the Troika ‘memorandum’: should Greeks accept the austerity or reject it?  Despite a massive propaganda campaign by the pro-business media in Greece and internationally and lack lustre campaigning by Syriza, Greeks voted 60-40 to reject the Troika.  Little more than one day later, the government ignored the vote and capitulated.

Loans To Pay Off Loans

For the next four years, the Syriza government has duly attempted to implement every single demand of the Troika.  Pensions have been slashed, public sector employees have been sacked and wage freezes imposed, state assets have been sold off, taxes have been raised sharply.  Varoufakis resigned after the capitulation and toured Europe; and the left faction in Syriza split away to run its own electoral parties – to no avail.  The Syriza government ploughed on in the hope and expectation that if it met the austerity measures imposed by the Troika, it would eventually be able to resume economic growth, gain some ‘fiscal space’ and ‘return to the market’ for government borrowing.

The first loans that the government had got from the Troika were used to pay off French and German banks which held billions on Greek government debt that was not virtually worthless.  After this private sector bailout, the next loans were used to meet repayments to the IMF, the ECB and other governments from the first bailouts.  In this never-ending circle more debt was raised to pay off previous debt!  None of this money went to alleviate the depression being suffered by Greeks to their living standards.  The Greek economy collapsed by 30%, pensions and wages fell 40%; thousands of young people emigrated for work and public services and jobs were decimated.  And the biggest hit was to private sector jobs in tourism, industry and travel.

Did the Austerity Work? The Short Answer is NO

Did these sacrifices restore Greek capitalism and eventually reverse the calamitous decline in output, employment and incomes?  The short answer is no.  Greek unemployment rates remain very high, especially for young people. 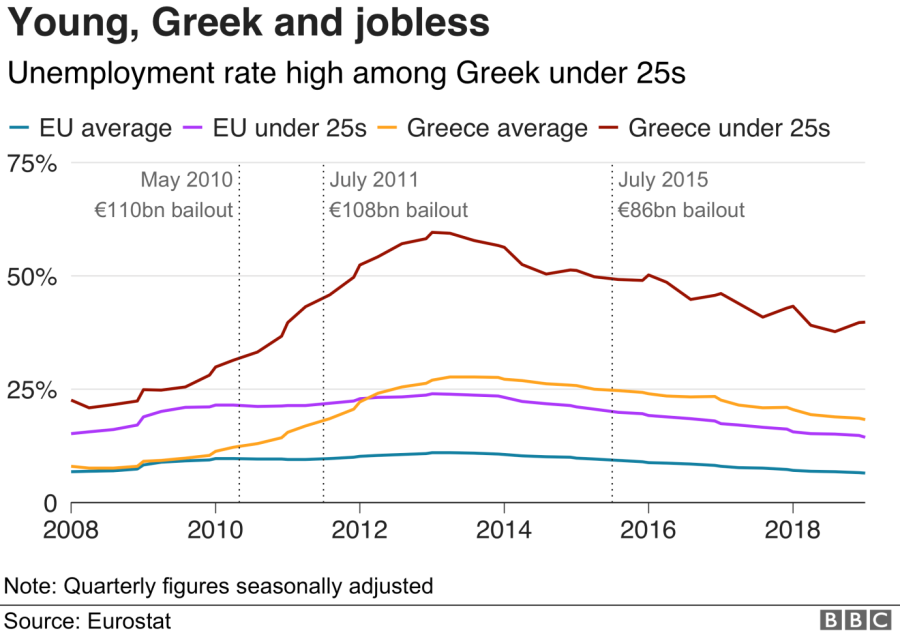 Capital investment collapsed during the debt crisis but has not recovered.  Greek business cannot invest.

Government spending has been driven down by the austerity measures.

But this has not reduced government debt to GDP, which remains at a staggering 180% of GDP and will stay there for the foreseeable future.  All the austerity measures have not dented the government debt built up to bail out the foreign banks, the Greek banks and other holders of Greek government debt.  The failure of the private sector, Greek business and global capitalism has been shifted onto the books of the government and its people for generations to come.

Strategy of Syriza Based on Economic Growth

The huge loans that the Greek government owes to the EU leaders (the IMF and the ECB have been paid off) do not have to be repaid for a decade or more and the interest cost on the loans is low.  But the debt has not been written off; it must be repaid eventually and the Greek government must run a huge budget surplus in order to cover future payments, the interest on the debt and to obtain new loans from the global market.

The whole strategy of the Syriza government was that, as economic growth returned to the Eurozone, it would lift up the Greek boat with other European boats in the rising tide of economic recovery.  ‘Fiscal space’ would be created and public services and pensions could then be improved while still meeting the repayment schedule of the creditors.

But it has not worked out like that.  Eurozone economic growth since the debt crisis has been pathetic, hardly creeping above 2% a year and now slowing again fast.  During the debt crisis and the eventual capitulation of the Syriza government, I estimated that Greek economic growth would have to average at least 3% a year in order to end austerity if the government continued its commitments to the Troika.  Instead, the Greek growth rate has been averaged little more than 1% a year under the Syriza government.  It’s currently slowing down from a short burst above 2% to just 1.3%

The Syriza Strategy has Failed

The new Conservative government takes over just as the Eurozone economies and much of the rest of the world face a slowdown in investment, trade and growth at best – and an outright recession at worst.

The Syriza leaders’ economic strategy of accepting the Troika programme, honouring the debt burden and staying in the EU has failed.  The result has been total disillusionment with Syriza, particularly among the young. Many have left to find work; those who have not either did not vote in the election or voted for a change of government in the form of New Democracy.  Anecdotes of these attitudes have been expressed in the media.

Like many young Greeks, Tasos Stavridis plans to leave the country once he finishes his degree in political science.  “Our financial crisis has gone on much longer than we expected and we are so exhausted,” says the 22-year-old. “Most of my friends plan to leave too. In Greece the salaries are so low, and the economic situation is so bad,”  What about New Democracy? “The truth is, I blame them [for the crisis] too,” admits Stavridis. “But I believe Mitsotakis has made a lot of changes. I agree with the economic plan this party has, and I believe it will help us escape this situation.” We must focus on the private sector in order to get better economically,” he believes. “Our public sector is inefficient and lazy.”  Then “The last time my family supported something left, it turned out to be a lot worse,” says Zoe Babaolou, a 19 year old from Thessaloniki who voted for New Democracy in the European elections. “It seems better to return to something safer.” Babaolou adds: “We voted for ideology in 2015 and we didn’t see any changes. So I’m more interested in economic measures.”

Could there have been an alternative to the strategy of Tsripras and the Syriza leaders back in July 2015 when the referendum to oppose Troika austerity was supported by the majority of Greek people?  I think there was.  One option prominently pushed by the left faction of Syriza MPs was to break with the EU and the euro; revert to the Greek drachma, devalue the currency, impose capital controls on any flight of money, renege on the debt and revert to government spending programmes.

For example, this was the option presented by socialist economist and Syriza MP, Costas Lapavitsas, at the time.  Lapavitsas took a principled stand against the capitulation and broke with Syriza.  But he argued that: “the obvious solution for Greece right now, when I look at it as a political economist, the optimal solution, would be a negotiated exit. Not necessarily a contested exit, but a negotiated exit.” This would involve a 50% write-off the debt owed to the EU and protection of the new Greek currency (devalued by just 20%) with liquidity from the ECB.

My thought then was that even if the Troika were to agree to such a ‘negotiated exit’, which was a moot point; and even if the new Greek drachma only depreciated by 20% (extremely unlikely), the Greek economy would still be on its knees, unable to restore living standards for the majority. Devaluation and rising prices would eat into any gains made from cheaper exports. Lapavitsas seemed to recognise this when he said at the time:“Wages must rise, but even if they rise, you’re not going to go back to where you were. It’s just not feasible at the moment. We need a growth strategy for that.”

But Lapavitsas opposed a growth strategy based on socialist planning. “I don’t think that Syriza should come out with a broad and wide nationalization program right now. What is necessary is to nationalize the banks, of course. And to make sure that energy privatizations stop, electricity in particular. That stops. And privatization of other key assets stops. We need to put a growth and recovery strategy in place immediately outside of the euro, and later to have a medium-term development plan.” For me, the strategy that Greece leaves the euro and implements a broad Keynesian spending programme first, leaving any socialist measures to later could not work because the forces of capital internationally and domestically would be untouched.

There was a Socialist Alternative for Syriza

In my view, there was another option: a broad and wide programme to replace capitalism. For me Greek capitalism needed to be replaced, in or out of the euro. That would mean public ownership of all big business and foreign capital in Greece; a democratic mobilisation of workers to control their workplaces and the economy with a plan of investment and production.  A socialist Syriza could then appeal for support among the wider labour movement in Europe to force their governments to drop their imposition of austerity, cancel the debt and begin a Europe-wide programme of investment to include Greece.

Such a strategy would have more support from other European workers and at home than one that concentrated on condemning the euro as the problem.  After all, there was always a majority of Greeks in favour of staying in the euro and the EU. Greece is a small and weak capitalist economy; it cannot succeed without success in the rest of Europe; and that applies to a socialist Greece too.  But at least the Greek people would be in control of their own capital assets and labour allocation.

But whatever the merits of a Keynesian or Marxist option back in 2015, now we have the return of the pro-business, corrupt, dynastic-led New Democracy government which originally presided over the financial crash and recession back in 2010.  The programme of the Mitsotakis government is to privatise, reduce taxes for the rich and encourage foreign investment, while keeping wages and pensions down and government services to the minimum – neoliberalism if you want to call it that. 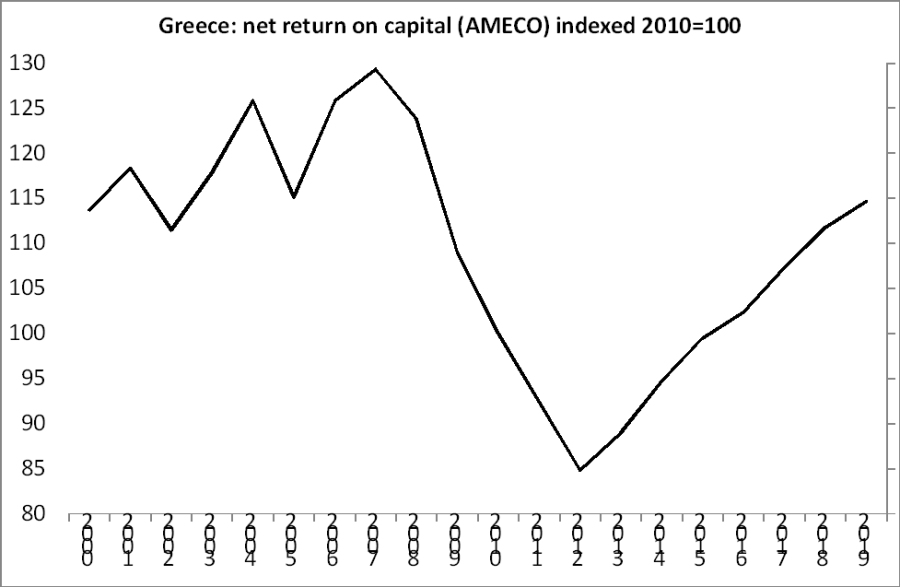 The real aim is to boost the profitability of Greek capital as the economic solution and hope that capitalist then invest in Greece.  According to the EU’s AMECO database, Greece’s net return on capital plummeted by 35% from 2007 to 2012.  Under the Syriza government, profitability recovered 20% but is still some 15% below the 2007 peak.  The aim of the new government will be to continue the work of Syriza to save capitalism but with extra energy and vengeance.  Meanwhile a new global recession looms nearer.