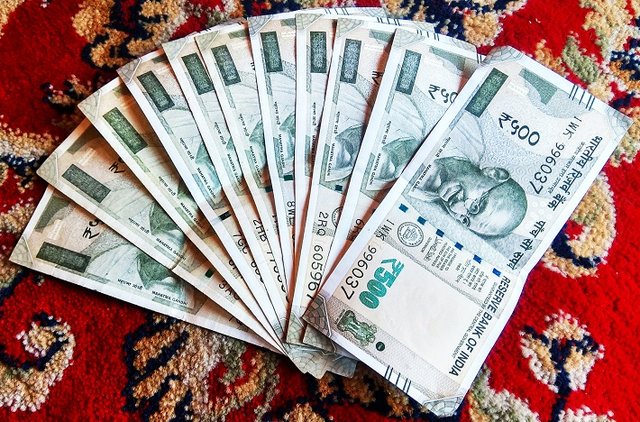 According to IHS Markit, a London based information provider, India is going to overtake the UK, its former colonial ruler, to become the world’s fifth largest economy this year and is projected to outdo Japan to feature at the second position in the Asia-Pacific region by 2025. Modi’s re-election at the helm of the Indian government, last month revived hopes from all sectors of the industry. To celebrate his victory, the Indian stock market indices, Sensex and Nifty, rallied to record heights expecting more business-friendly measures. The confidence is high that economic growth, corporate earnings and a flurry of policy initiatives is forthcoming despite scepticism from various corners. However, the questions around the mounting Non-Performing Assets (NPAs) of the banks, the rising corporate debt, the low corporate earnings and the global economic uncertainty are some of the issues that continue to haunt the Indian economy.

While it might be a bit too premature to compare the Indian situation with the Asian crisis of 1998 or the global crash of 2008, the situation doesn’t look comfortable either. Earlier, in 2017 a report by Credit Suisse drew attention to India’s corporate debt problem. The report revealed that about 40% of India’s corporate debts are with firms that are unable to even earn enough to pay the interest costs. It is important to understand that corporate loan repayments are structured in such a manner in which the capital and interest is paid back in a series of regular payments to the creditor, i.e. an annuity. The annuity is configured in a way so that the first few payments only cover the interest, and the later payments take care of the the capital. It is for this reason that the data about the above 40% debt is most striking. It implies that a huge amount of firms are in a downward spiral. Possibly, they would be always trapped in the interest-paying phase of the annuity, never reaching the capital-paying stage. As a result, such sums of money that these firms are unable to repay ought to be written off by the banks and declared as NPAs. The Credit Suisse report further says that out of the $ 530 billion total debt, almost two-thirds of it is with firms that have not covered interest payments for at least 11 of the past 12 quarters. About 30% of the total debt is with firms that have reported losses.

Indeed, data available for the last 60 years shows that the corporate debt as a percentage of GDP is growing steadily in India. And, the growth is steep since 2002-2003.

Growth of Corporate Debt in India

According to McKinsey Global Institute :

The report also states that:

Globally, the issue of burgeoning Indian corporate debt has received much less attention as compared to the Chinese corporate debt which hovered around 147% of GDP in mid-2017. It might have not scaled those levels like Luxembourg, Hong Kong, Ireland, the Netherlands, Belgium, Sweden, China, France, Norway, Switzerland or others where the quantum of corporate debt is more than 100% of the GDP but, the signs are troubling. Also the US corporate debt which stands at $9 trillion debt is a potential threat if interest rates continue to rise and the economy weaken. Although Wall street bond experts would like to make us believe that the issue would be contained in the next one year, at maximum, the financial indicators are not that reassuring. According to Securities Industry and Financial Markets Association data, the total US corporate debt has swelled from nearly $4.9 trillion in 2007 as the Great Recession was just starting to break out to nearly $9.1 trillion halfway through 2018, quietly surging 86 percent. No one wonder that a section of commentators and analysts consider this as a time bomb ticking.

In India, the corporate debt is spiralling up and it might not be long when it catches up those levels. Metal, power, and telecommunications are the sectors that account for 40% of the unserviceable debt. This is especially worrying because the three provide inputs to several other sectors and are also responsible for providing livelihoods to many people. A meltdown in them will have ripple effects throughout the economy. According the the same report:

Let us look at the story of Jet Airways which had consistently been one of India’s top three airlines in the past decade. It had the largest market share in the growing Indian aviation industry and also flew to several international destination. Abu Dhabi’s Etihad Airways PJSC owned 24 % shares of Jet Airways. The debt-ridden aircraft has gradually hit the ground in the last six months and is now completely stranded. The airlines has a net debt of INR 72.99 billion ($1 billion) and defaulted on loans that were due by December 31, 2018 and has been unable to pay to staff and lessors.

Earlier in 2012, Kingfisher Airlines, another glamorous high-flyer, founded by beer tycoon Vijay Mallya, ended operations after failing to clear its dues to banks, staff, lessors and airports. The stories of Kingfisher and Jet are symptomatic of what is happening to corporations that were perceived to fly India in the new century of prosperity.

The crisis in the banking sector is a manufactured one, where the commercial banks have been forced to perform large scale lending to the development projects and to the corporates and which has created an NPA of more than $ 150 billion till the end of 2018. Since 2015, NPAs have been increasing and today they even threaten the survival of the public sector banks. The very fact that 82% of NPA is that of corporate loans tells the root cause of this crisis which has been due to bad lending policies and inadequate due-diligence, collaterals, and recovery system.

According to the second-largest credit rating agency in India, CARE Ratings, India’s NPA ratio is fifth highest in the world only after Greece, Italy, Portugal and Ireland. India’s NPA ratio stands at 9.85% and the Reserve Bank of India’s (RBI) Financial Stability Report states that this ratio is set to deteriorate to 12.2% by March 2019, which would ‘promote’ India in fourth position, ahead of Ireland. 11 public sector banks fall under the prompt corrective action category, implying that the poor quality of balance sheets have to be addressed immediately to avoid potential meltdown. 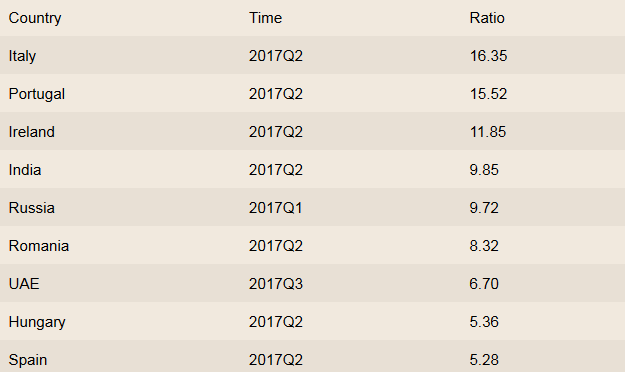 Highest Level of NPAs in the World.

Several commentators have raised the question whether the “NPA black hole” could “suck in the country’s entire banking system.” A systemic collapse can’t be ruled out. Already, many banks are not in a position to lend money leading to an anaemic credit supply from the country’s weak banking sector. The total disbursement of loans by public sector banks in 2016-17 was 69% of the total loans.

The troika of politicians, bureaucrats and the capitalists form a vicious nexus that controls these banks. Indian banks have written-off a whopping INR 1,56,702 crore ($ 101) of NPAs during the nine-month ended December 2018, taking the total loan write-off to over INR 7,00,000 crore ($ 101 billion) in the last 10 years, according to figures revealed by the RBI. A large chunk of the write-offs, or almost four-fifth of the total amount written off in the last 10 years, have accrued in the last five years since Narendra Modi came to power in 2014. This grotesque magnanimity to the corporates is being attempted to be compensated by recapitalisation of banks through public funding, which in other words means that the ordinary Indian people would be bailing out the banks that are still being plundered by the corporates. It is nothing but a vicious example of crony capitalism, where those with connections to the politician-bureaucrat mafia “laugh their way to the bank.” The $1.77 billion Punjab National Bank (PNB) scam, possibly the biggest financial chicanery to have hit the Indian banking sector, is a perfect example of this trend.

While many advocate privatising the public sector banks as a panacea of all evils, private banks in India face huge problems too. The well-known private sector banks like the ICICI Bank, Axis Bank and Yes Bank had their share of NPAs as well. In the recent past, we have seen the glamorous top bosses of these banks forced to bid adieu, unceremoniously.

The contagion is not limited to the banks but has spread to Non-Banking Financial Companies (NBFC) that have emerged as a powerful entity in recent years, growing at 25-30% in the last five years. It seems that the NBFC party is over for now. This has a spillover effect on the banks because they were betting on NBFCs. According to reports, banks have huge exposure to NBFCs. The default of the Infrastructure Leasing and Financial Services (IL&FS) has sent shudders to the Indian financial system. Another NBFC, with a focus on housing finance has reportedly missed interest payments of INR 960 crores ($ 138.57 million). Valuation norms require a write-down in the value of assets in case of such payment delays. DHFL has faced a series of downgrades by rating agencies on its debt over the past two months. A series of banks led by Yes Bank and four other public sector banks have solid exposure to DHFL. The development will have a far-reaching impact on the financial sector with the fortunes of select NBFCs, housing finance companies, real estate, housing, auto and small-and-medium enterprises bearing the brunt. Such is the dire state of affairs that the government is reportedly on the verge of cancelling licenses to 1,500 smaller non-banking finance companies because they lack adequate capital.

Around a quarter of the total NPAs in India comes from a motley crew of shadow banks that have grown exponentially. These are quasi-unregulated and they lend in particular areas such as real estate. As they are usually prohibited from taking deposits, they depend solely on loans to fund themselves. Likewise, The crackdown on China’s $10 trillion shadow banking market is also contributing to a rise in defaults.

The “irrational exuberance” or the state of mania that affected much of the world in the mid 2000s also touched India. The country enjoyed high economic growth. Numerous business enterprises began on an aggressive expansion spree on the back of bank credit. Even, the one of India’s most renowned corporate house fell prey to the dominant zeitgeist. Tata Steel’s $13.1 billion purchase of Corus in 2007 remains the poster child for this profligate era. Investor enthusiasm drove asset prices up to levels that aren’t supported by fundamentals. Needless to say, this purchase — like many others 10 years ago — has turned out to be an unmitigated disaster.

The problems with firms will result in even greater troubles for banks. Until very recently, lenders enjoyed little legal protection. Banks could rarely recover loans from those with political connections. Forgiveness and haircuts were the norm when things went south for big borrowers. Borrowers could rack up debt safe in the knowledge that losses would be borne by taxpayers while gains would be theirs alone. They still carry the ‘right’ to privatise the profits and socialise losses but this comes a cost.

Though it is not still not outgrown into a full grown crisis, a sell-off in global markets could easily trigger a new wave of panic. This growing contagion of corporate debt that is spreading over to banks and NBFCs will be a prime element in the next financial crisis. Companies getting overstretched on cheap credit and with falling profits and rising profit rates the mountain of corporate debt has all the potential to trigger an economic crisis in India and many other parts of the global South like its peers in the North.

Courtesy Committee for the Abolition of Illegitimate Debt (CADTM)