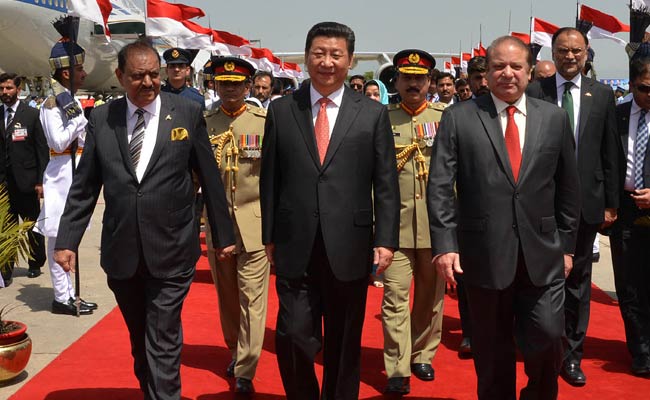 There was a great pomp and show. There was a din of “eternal Pakistan-China friendship” broadcast from every media channel and newspaper incessantly for almost two days. A Chinese head of state was paying a desperately awaited visit to Pakistan for the first time in many years.

The government rolled out the proverbial red carpet when the Chinese President Xi Jinping landed at Chaklala Airbase, where President and Prime Minister Nawaz Sharif, along with federal ministers and all services chiefs, received him. Earlier, eight Pakistan Air Force (PAF) JF-17 Thunder fighters escorted President Xi’s plane when it entered Pakistani airspace. A twenty-one-gun salute was presented to the Chinese leader as he alighted from his plane. He was later presented a guard of honour by a contingent of armed forces and PAF jets did the fly past.

It was the first time that a Chinese top leader spoke to Pakistan’s parliament. His emotive warmth was resonating, when Mr Xi said, that in discussing the history of Pakistan-China relations, “it is often termed as higher than the Himalayas, deeper than the ocean and sweeter than the honey by the Pakistani brothers while Chinese people refer to Pakistani people as good friends, good partners and good brothers…both countries should maintain strategic communication on regional and international issues. China supports Pakistan’s constructive role in Afghanistan…”

But it was the Pakistani prime minister Mian Nawaz Sharif who spilled the beans and said it all. During his welcoming speech appreciating the Pakistan-China friendship he said, “It symbolizes our determination to create win-win partnerships, which threaten none, but benefit all.” The business entrepreneur came out of the garb of a politician. All the party leaders of Pakistan’s bourgeois politics stood in unison, foregoing their wrangling facades and deceptive conflicts. So did the honchos of the capitalist state. Some perhaps were naively hoping for a “Chinese miracle” to cure Pakistan’s cancerous capitalism, while most were all praise for this Xi Jinming, the oligarch representing the upstart Chinese bourgeois that have amassed billions in their coffers.

However, what Sharif meant by this friendship is that it’s not really between the peoples of the two lands but between the elites who are now looking for massive profits from the projects announced which will be “built” by the Chinese companies and private contractors along with subcontractors and commission agents. Sections of the state and the bourgeois representatives present in that hall of deceptive power will try to get a share of the massive generation of wealth through the exploitation of the resources and workers of these countries. But they will be awfully disappointed. Those who think that this landmark visit and MOU’s [memoranda of understanding] will turn around the fortunes of Pakistan’s crumbling economy are sadly mistaken, to say the least.

The Chinese upstart elite is not making this investment for a utopian and sentimental friendship, as the intelligentsia and the media would have us believe, but for naked, exorbitant profits and its strategic hegemonic designs in the region. China’s investment aims at opening up the neglected province of Baluchistan and developing Gwadar as a strategic and commercial port. This in turn is likely to increase China’s presence in the Gulf of Oman and the Arabian Sea. The economic corridor will open up new business, commercial and military opportunities for them. The development of an economic corridor linking to Gwadar will obviously increase the presence of the Chinese fleet in the region. Gains for China include opening up of the relatively less developed western region that will benefit from shorter access to the sea. China’s potential of forward deployment of its naval assets in the Gwadar and Karachi ports will materialise. At the same time these projects could lead to greater integration of Pakistan’s natural resources and markets with the Chinese economic expansion plans.

China is also the largest investor in Afghanistan, as well as the biggest arms supplier to the Pakistan armed forces. China’s interest in Afghanistan appears to be increasing as US forces withdraw from the region. Initially, its involvement in Afghanistan was securing strategic materials, such as copper, iron, etc. The US and other Western countries have been complaining that China was taking undue advantage of the security umbrella provided by NATO and ISAF. They wanted it not only to be a consumer but also a provider of security. Now that NATO and the US are pulling out of Afghanistan, China is showing greater willingness to be more proactive in helping maintain the region’s security. Moreover, it realises that Afghanistan’s stability will have a positive impact on the restive Xinjiang province. China’s strategy is to negotiate and engage with the Taliban leadership and play a more proactive role in Afghanistan for these very economic and commercial interests. China’s main interest is to use or rent the Pakistan military machine for these hegemonic purposes. Perhaps it was for these material reasons that Xi Jinming was playing the Pakistan-China friendship card so vehemently. What we are also witnessing is that China is projecting its soft power in this region through economic prowess and sophisticated diplomacy. Another element of China’s soft power, which is less talked about, is its political stability, notwithstanding its one-party rule. But it is doubtful that the largest investment package of 45 billion dollars announced for Pakistan will actually materialise, due to the fledgling economic growth and its bleak prospects. It simply won’t have the economic muscle to carry out these strategic policies and economic investments.

In the last few years the Chinese ruling elite has desperately been trying to salvage a declining growth rate, unravelling economic decay, exacerbating poverty and the sharpening class struggle. The Chinese economy in 2014 experienced its lowest economic growth since 1990. The IMF downgraded its 2015 growth projection from 7.1% to 6.8%. According to the Financial Times, “Thirty out of China’s 31 provinces had missed their growth targets for 2014 – the only one that didn’t was Tibet, by far the country’s smallest regional economy. Such figures illustrate the beginning of the end for China’s ‘miraculous’ boom, as the reality of capitalist crisis is seeping through to the world’s largest exporting economy.”

After an immediate drop in the rate of GDP increase to 9.6% in 2008 from the previous year’s 14.2%, with a sharp fall in her exports the Chinese government embarked on a gigantic “economic stimulus package” equivalent to US$586 billion in infrastructure, especially in construction and heavy industry.

Inspite of the build-up of massive overcapacity and speculative bubbles the state kept the process going. The announced investments in Pakistan with crushing interest rates are part of this Keynesian policy to keep the bubble inflated. All this simply meant that the crisis had only been delayed in fear of a mass revolt. The Chinese economic policymakers have taken drastic measures to bolster growth such as quantitative easing by printing an extraordinary 500bn yuan ($81bn) in September last year. But the longer it is put off, the harder it will crash when it occurs. No “market economy” can avoid the laws of capitalism.

As slow and weak growth continues to haunt the US and Europe, even with the danger of a slump looming, Chinese industry will lack a market for its goods. The Chinese economy is moving inexorably towards a sharp slowdown. It is plagued with overproduction. This “downward pressure” is mainly due to lack of demand. Productive capacity has fallen below 70 percent. Combined with the immense mountain of debt due to the regime’s gigantic and unnecessary Keynesian projects, the further destabilisation of the economy is inevitable. As much as the government has attempted to overcome this organic economic problem with even bigger stimulus packages, the brutal contradictions are coming to the surface.

Chinese state policies have exacerbated the acute contradictions between wage labour and capital. Relative wages are now falling. The majority have not benefitted from the massive speculative investment. Real unemployment is actually closer to 20 per cent despite false official figures. Some 274m rural migrant workers are almost entirely ignored by the job statistics. In spite of the hue and cry of the bourgeois media about capitalist counter-revolution ‘lifting millions out of poverty’, the reality is far starker. According to World Bank statistics, 67.8% of the population (902 million) lives on less than $5 a day. China accounts for a record one-fifth (370) of all billionaires in the world, rising from 17.6 per cent in 2014, the China Rich List 2015, compiled by the US business magazine Forbes, said. “The legislature of the world’s last major communist country is almost certainly the wealthiest in the world, the top rich list names 83 dollar billionaires among Chinese communist party’s, National Peoples Congress. Meanwhile, in America there is not a single billionaire in the House of Representatives or the Senate,” reported the Financial Times. The Communist Party of China is neither communist nor a party but a dragon of the upstart elite that sucks the blood of the workers in China and across the world wherever they make their imperialist investments.

After South Africa, China has the largest gap between the rich and the poor in the world. The growing income inequality is illustrated most clearly by the differences in living standards between the urban, coastal areas and the rural, inland regions. There have also been increases in the inequality of health and education outcomes. The bosses and the state are discovering the real consequences of depriving increasingly emboldened industrial workers of their livelihoods. There were 1380 major strikes of workers in China in 2014, most of them victorious. Much more loom across the horizon. It is not a coincidence that China is perhaps the only state in the world with its internal security expenditure (464 billion dollars) higher than external defence (435 billion).

The recent fall in oil prices was also closely related to the world crisis and its reflection in the slowdown of the Chinese economy. The ailing capitalist system is being propped up artificially by a Central Bank life support machine, which has poured trillions of dollars into the financial system. However, the more these unprecedented measures are used to prop up the system, the less impact they have, like a drug addict who needs a bigger and bigger hit in order to get the same high. Five years ago, it took just over $1 of debt to generate $1 of growth in China. In 2013 it took nearly $4 of debt to generate $1 of growth – and one third of the new debt now goes to pay off old debt. China’s growth rate has fallen to the lowest in over 20 years. The Chinese capitalist miracle stands exposed and is being exhausted.

The chances of its robust recovery are ruled out. The despotic regime of the new president Xi Jinping can boomerang on the Chinese elite. To expect such a greedy ruling clique to alleviate poverty in Pakistan through investment is absurd to say the least. This “friendship” gimmickry is to mock and deceive the ordinary people. The Pakistani ruling class is no less mean and reactionary. Power is only traded and bought for more loot and plunder. Lenin wrote in his epic work, Imperialism the Highest stage of Capitalism, that “a capitalist country acquires an imperialist role when it begins to export capital.” China is the largest exporter of capital in the world. It is the biggest investor in Asia, Africa and Latin America. Its evil designs on Baluchistan and Pakistan are the same as those of the American and other, world and regional imperialist states. Napoleon once said that, “When China awakes the world shall tremble.” That China is the proletarian and the toiling masses of that land. That China is beginning to turn. Its only the working class of China with whom the ordinary people of Pakistan can form a bond of genuine friendship that can unite them in a revolutionary transformation of the whole region and beyond.