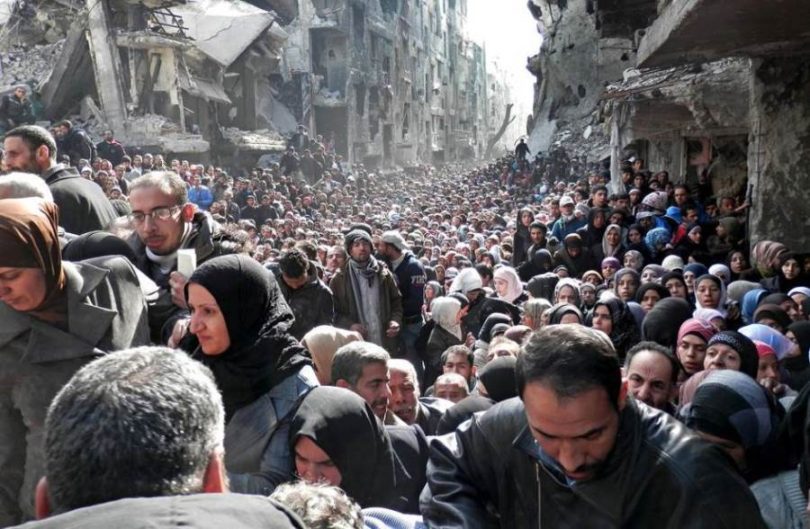 A grotesque humanitarian disaster looms large as the conflagration and mayhem ravages the Middle East. The number of people fleeing the civil war just in Syria has now surpassed four million, according to the UN refugee agency. “This is the biggest refugee population from a single conflict in a generation. It is a population that needs the support of the world but is instead living in dire conditions and sinking deeper into poverty,” said UN High Commissioner for Refugees, Antonio Guterres.

The Middle East gave birth to some of the most ancient civilisations around the Bosporus, the Nile and the Euphrates. This region saw the rise and fall of the Egyptian, Roman, Byzantine, Persian, Umayyad, Abbasid, the Ottoman and other historical empires. The Middle East today is in the throes of violence, bloodshed, forced migration, occupation, repression, poverty and misery. Despite the huge mineral, hydrocarbon, and human resource wealth, the masses across the Middle East are suffering as never before. In a tragic paradox, this is due to these very resources and its strategic location. There is not a single state in the region that is not plagued by instability, social turbulence, state repression, economic turmoil and terrorism. Despotic democracies, vicious monarchies, reactionary Sheikhdoms and brutal military regimes have inflicted repression and destitution. Imperialist occupations and fundamentalist terror have exacerbated the catastrophe.

With the collapsing of the Ottoman Empire at the beginning of the twentieth century during the First World War, the whole of the Middle East was at the mercy of western imperialism. The strategists of capitalism rushed to carve up the vast territory of the Ottoman Caliphate by drawing straight lines in the sands and creating artificial states of the Levant, comprising mainly the Middle East, a dominion of the last Caliphate. The Sykes-Picot treaty, the Balfour Declaration and the treaty of Versace were some of the diplomatic manoeuvres that were carried out for the balkanisation of the region and control of its resources.

This colonialisation was based on the age-old tested policy of the ancient Roman emperors of divide and rule by fuelling nationalism, ethnic, religious and communal divisions on the one hand and by buying and propping up local stooges of monarchs, dictators and religious sectarian dynasties. The current onslaught of Islamic fundamentalism is not a very new phenomenon. Between 1917 and 1926, Abdul-Aziz Bin Abdul-Rehman (known as Ibn-Saud) and his armed Wahhabi desert hordes, with the active help of the British military, took control of what was known as Najd and Hejaz and fabricated the reactionary kingdom of Saudi Arabia. For 90 years the vicious and hedonic Saudi monarchs have been in power with US imperialist support. They fomented the vicious Wahhabi sectarian fundamentalist terror to sustain imperialist hegemony far beyond the territories they ruled.

The plight of the Palestinian masses is a festering wound in the body politic of this region. The so-called ‘democratic’ Zionist regime is no less brutal. Gaza has become the largest open-air prison in the world. The atrocities and cruel occupation of Palestine by the Jewish fundamentalist Israeli ruling class and all its crimes against humanity are exonerated by the ‘international community’ and western imperialism.

The western media’s portrayal of the IS and Al-Qaida ‘threat’ to western liberal, secular and democratic values has become media jargon today. The truth is that not only are these Frankenstein monsters their creation, but also the different regional and world imperialists continue their proxy crusades through various splinter groups of this black reaction. These are being used as tools to impose imperialist hegemony and the plunder of corporate capitalism that has wreaked havoc in the region. Syria is suffering the bloodiest conflagration in its history. Iraq is in the throes of a violent and catastrophic disintegration. So is Libya. Egypt is under a ferocious military dictatorship. The regional monarchy is inflicting bestial pre-medieval repression with public beheadings and remorseless exploitation and coercion of the workers, 80% of whom are Asian migrants. Iran is suffering reactionary social despotism and is plunged into deprivation, poverty and gender discrimination. The Shiite Mullah oligarchy has accumulated obscene wealth by exploiting the Iranian workers and resources. This reactionary clergy has used the external threats to perpetuate its vicious rule since 1979.

The analysts and historians of the status quo shove the rich history of revolutionary struggles in this region into oblivion. In the post-World War II period the Middle East was swept across by revolutionary insurrections. From Syria to Sudan, Libya, Yemen and Iraq there were mighty movements against capitalism and imperialism. In Egypt the rise of radical Arab nationalism in the 1950s led by Nasser not only defeated the Israeli, French and British imperialists in the Suez war but was rapidly moving towards the overthrow of capitalism. Ironically, he was stopped by Brezhnev’s Stalinist regime in Moscow.  The overt and covert support of US imperialism for the Muslim Brotherhood under the Eisenhower administration reincarnated what we are witnessing as modern Islamic fundamentalism. This was used as a tool of imperialism against the revolutionary movements and left wing regimes and expedited to crush the youth and the mass upheavals threatening capitalism. Now the chickens have come home to roost. The Frankenstein monsters such as the IS are pestering imperialism and their puppet regimes. Even these stooges are often taunting their weakened and debilitated imperialist masters. However, the corporate media is inversely using these Islamic bestial monsters to terrify the workers and the youth in the US, Europe and other advanced capitalist states.

In 2011 we saw a new revolutionary wave sweeping across the Middle East, from the coast of the Arabian Sea to the shores of the Atlantic. The workers and the youth, inspired by the movements in France, Greece, Spain and other European countries, rose up starting with Tunisia and rapidly spreading like a revolutionary storm throughout the region, not just against the repressive regimes, but against the system that has coerced and agonised their lives. Without a revolutionary goal, however, these movements were destined to retreat.

The only force that can cut across the menace of Islamic fascism and imperialist exploitation is the youth and workers who were the vanguard of the 2011 revolts. If the forces of barbarism are threatening the region, then the masses in the Middle East have also proved more than once in recent history their capability and strength to fight and defeat the forces of religious reaction and despotic states. They shall rise again sooner rather than later. With a Marxist leadership these mass upheavals will overcome the prejudices of sectarianism, religion, narrow nationalism, ethnicity and race to carry out successful revolutions. A socialist revolution will demolish every element of barbarism, religious reaction and corporate plunder. This victory will foment a socialist federation of the Middle East, cleansing it of all violence, prejudice and black reaction along with the stranglehold of imperialist hegemony. Instead of being a hub of humanitarian disaster it will be transformed into a beacon of hope for the peoples of the planet.