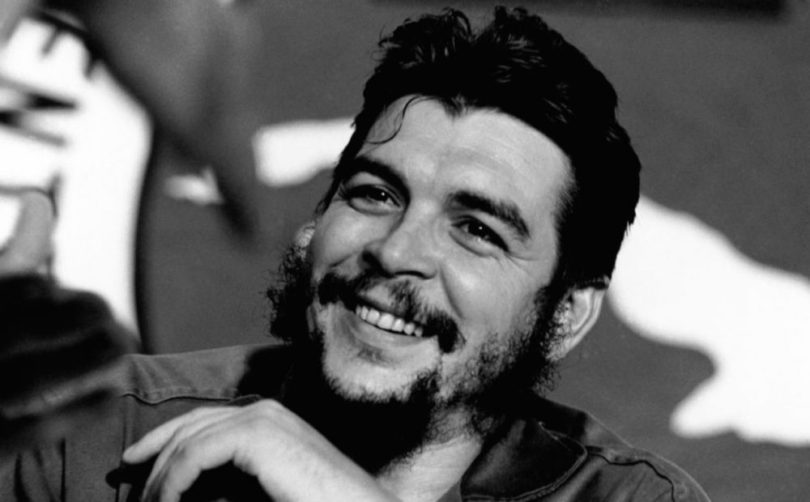 Today marks the 50th anniversary of Guevara’s death – an event that Bolivia’s left-wing president, Evo Morales, will commemorate with several state events including a “Relaunching of the Anti-Imperialist Struggle”. On October 9, 1967 Ernesto “Che” Guevara – the Argentina-born revolutionary was brutally murdered in the Bolivian village of La Higuera 40 miles northeast of La Paz. His body was buried in a secret location due to the state’s fears of a backlash. However, in 1997 his remains were discovered, exhumed and returned to Cuba, where he was reburied. Che had played a crucial role to defeat the regime of the US-backed brutal military dictator, Fulgencio Batista during the armed struggle that culminated in the Cuban revolution of 1959. Che along with Fidel Castro was the main leader of the Revolution.

His revolutionary struggle spanned continents and he fought hand in hand with the indigenous revolutionaries in regions as far flung as Angola in Africa. He detested the ‘fruits of power’ even after Cuba’s revolution where he held top posts in the new government. In November 1966 Che travelled from Cuba to Bolivia clandestinely with his 47 comrades to join the Bolivians rebels fighting against the imperialist sponsored regime of René Barrientos Ortuño.  The US imperialists took revenge of their Cuban defeat and their fostered Bolivian army captured Guevara and his comrades on October 8th. Che was executed the next day.

To construe Guevara as just a ‘guerrilla fighter’, as the corporate media does, is dishonest and false. His understanding of Marxist theory and practise advanced rapidly with his experiences during the revolutionary struggles he launched. Che’s death in October 1967 interrupted a process of political development and revolutionary strategy. From 1959 to 1967, Che’s thought had progressed considerably. He had developed a thinking that socialism cannot triumph unless it holds out the offer of a civilization, a social ethic and a society incompatible to the values of petty individualism, unfettered egoism, competition, the war of all against all: characteristic of capitalist society.

In a 1963 interview, Che elaborated an implicit critique of Russian Stalinism:

“Economic socialism without a communist morale does not interest me. We are fighting poverty but at the same time alienation…if communism is dissociated from consciousness, it may be a method of distribution but it is no longer a revolutionary morality… socialism is a society based on values of equality, solidarity, collectivism, revolutionary altruism, free discussion and mass participation.”

“ The countries claiming to be ‘socialist’ must put an end to their implicit complicity with the exploiting countries of the West…Socialism, cannot exist without a change in consciousness to a new fraternal attitude toward humanity, not only within the societies but also on a world scale toward all peoples suffering from imperialist and capitalist oppression.”

Che Guevara vehemently rejected ‘market’ economy inflicting misery upon the oppressed classes. He was a fervent supporter of a democratically planned socialist economy: “The masses must be able to direct their fate, to decide which share of production will be assigned respectively to accumulation and consumption. The Economic technique must operate within the limits of this information and the consciousness of the masses must ensure its implementation.”

Che always keen to learn more knowledge and a deeper understanding of revolutionary methodology. One of his closest comrades, Frank G., who was with him until his death in the forests of Bolivia told a Cuban journalist that in a Guerilla movement one of the important principles is to carry least possible weight as one has to climb steep hills and tread rugged terrains. But when Che was captured by the Bolivian military he was carrying a huge volume of Leon Trotsky’s ‘History of the Russian Revolution’ in his backpack. (This book has now been translated into Urdu, the first oriental language in which this epoch-making work has been published.) This anecdote demonstrates his incessant passion for learning and developing his ideas till his last breath.

His struggles inspire the veracity of achieving the aspirations and desires of the deprived. The struggles he fought were inspired by his commitment to the cause of human liberation. In an article published in Volume III of his works published in Havana (2006), Che wrote, “the true Communist, the true revolutionary is one who feels that the great problems of all humanity were his or her personal problems, one who is capable of feeling anguish whenever someone was assassinated, no matter where it was in the world, and of feeling exultation whenever a new banner of liberty is raised somewhere else.”

Che Guevara died still fighting gun in hand. Fifty years after his death Che’s struggle still rouses courage. The life and the legacy of Che spark optimism amongst today’s youth. There are increasing numbers of articles, books, films, and debates on Guevara. It is not just in commemoration of the 50th anniversary of his death but it’s the quest to find a path that the honesty, fraternity, sacrifice and dedication of Che’s struggle represents and counter-poses to the hypocrisy, selfishness, deceit and treacheries in the relations, ethics and morality of today’s capitalist society based on lust, greed and cutthroat competition. Che Guevara’s commitment and scientific belief on Marxism was profound. In his  ‘Notes of the 1960’s, Che wrote. “The merit of Marx is that he suddenly produces a qualitative change in the history of social thought. He interprets history, understands its dynamic, predicts the future, but in addition to predicting it (which would satisfy his scientific obligation), he expresses a revolutionary concept: the world must not only be interpreted, it must be transformed. Man ceases to be the slave and tool of his environment and converts himself into the architect of his own destiny.” Guevara’s reminiscences are glowing coals heaped under the dark ash of disappointment and apathy. Those who dare to fight for a scientific alternative to this rotting society even after the collapse of the Soviet Union and capitalist degeneration of China can obtain enormous motivation from Che’s life and his tragic assassination at the young age of 39 years.