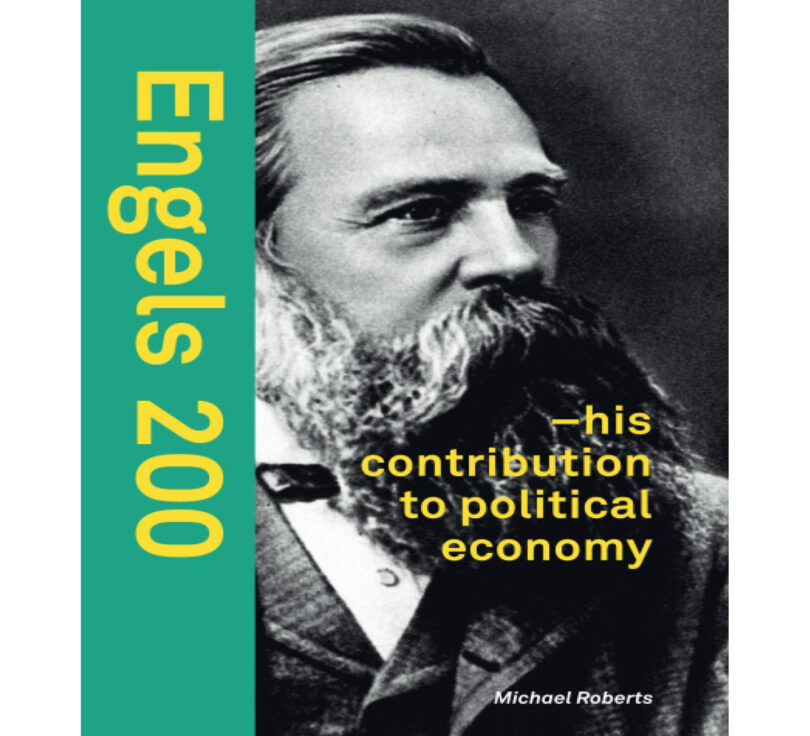 Marxist economist Michael Roberts writes a regular blog on all the current developments in world capitalism and most of his articles are reproduced in Left Horizons [and Asian Marxist Review]. His latest book, to mark the 200th anniversary of the birth of Friedrich Engels, looks at the contribution this made by this great pioneer of socialism to political economy, what in everyday language we now call ‘economics’.

Engels is probably better known for his books on what became known as Marxist philosophy – Dialectics of Nature and Anti-Duhring, as well as his co-authoring of the Communist Manifesto. It is his co-founder of scientific socialism, Karl Marx, who is usually associated with political economy, particularly from Marx’s three-volume Capital. But, as Michael Roberts, points out, Engels himself made a considerable contribution to political economy in his own right and it is not always recognised.

Anticipated Some of Marx’s Ideas

“Engels was the first,” Roberts points out, “to present a critique of the contemporary classical political economy of Smith, Ricardo and Malthus from a Marxist perspective – that is, before Marx himself.”

In some of his writings, Engels anticipated some of the ideas that Marx developed in a lot more detail. In 1843, for example, he wrote Outline of a Critique of Political Economy (Umrisse) and it was published by Marx, then in Paris, in the Deutch-Französische Jahrbuccher, in 1844. “Preceding Marx,” Michael Roberts notes, “Engels argued that capitalism leads to the concentration and centralization of property.” It was in Umrisse that Engels also developed a critique of Ricardo’s economic ideas and developed himself a theory of value that we would now describe as ‘Marxist’.

Michael Roberts’ book has sections on all the main aspects of the capitalist economy and how it functions: international trade, boom/slump cycles, wage labour, machinery, the law of value and others. He shows, by quoting Engels’ works, how in all respects Engels’ views were identical to those developed in more detail and depth later by Marx in the three volumes of Capital.

It is not surprising, therefore, given the closeness of their ideas and the almost identical evolution of their thinking from their young days as Young Hegelians, that Engels was to edit the great majority of Marx’s posthumously unpublished economic works. Only the first volume of Capital was published in Marx’s lifetime and so it was after his death, that Engels brought together all of the voluminous notes and writings, and was able to assemble and edit them as volumes II and III of Capital.

A ‘Marxist Before Marx’

Engels became, after the death of his friend and close collaborator, the single most important standard bearer for what ‘Marxism’ stood for. “Having been a Marxist before Marx,” Roberts writes, “he now became the Marxist after Marx.”

The final part of the book gives the full text of Engels’ famous pamphlet, The Part played by Labour in the Transition from Ape to Man, written in May-June 1876, but not published until 1895 in Die Neue Zeit and in English in Moscow in 1934. In it, Engels anticipated by the best part of a century, what are now accepted as standard ideas about human evolution and its interdependency to the deliberate interactions of homo sapiens with Nature, what Engels called ‘labour’.

Michael Robert’s book give an excellent account of Engels’ contribution to political economy, but in doing so, it provides a good ‘potted’ biography of Engels: born in the Prussian Rhineland, eventually finding his way to working in the cotton industry in Britain and a life-long friendship and collaboration with Marx.

But more importantly, Roberts’ book also offers an accessible ‘primer’ in Marxist economics, not only showing the linkage between the ideas of the two great founders of scientific socialism but relating their ideas them to the crises of capitalism today. It is a book well worth reading. Put it on your list for holiday reading over the next month.