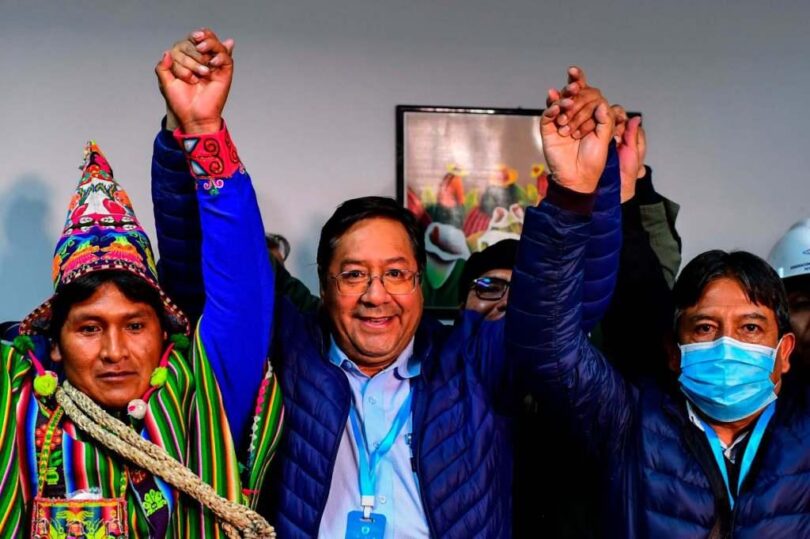 The 18th October elections in Bolivia once again brought Evo Morales’ Movement towards Socialism (MAS) to power, albeit this time without him leading the party through elections, in less than a year after his ouster in a military-instigated coup. The Supreme Electoral Tribunal announced on Friday, MAS presidential candidate and Evo Morales’ protégé and his former finance minister Luis Arce got 55 per cent of votes, while his nearest rival the centrist former president Carlos Mesa got 29 per cent of votes. Bolivian rightwing coup-makers and their US backers had initially thought that by removing Evo Morales everything will go on smoothly and they would have the best of all worlds. But things didn’t go as per their envisioned intrigues. The masses rejected the coup and fought back to defend the economic and social gains made in the last 14 years of Morales era. The Bolivian masses, especially the indigenous populace, fought and braved the coup regime with a year of strikes and protest demonstrations which finally brought the regime to its knees and compelled it to hold elections. The MAS electoral win is yet another opportunity for them to overthrow capitalism from Bolivia, failing which previously caused Evo Morales to step down and flee.

The Sunday’s elections were actually the rerun of last year’s annulled elections on October 20th in which Evo Morales was declared the winner with 47.08 per cent votes. The Bolivian rightwing with the open intervention and support of imperialist watchdog OAS (Organization of American States) challenged the results citing “clear manipulation” and “significant irregularities” resulting in rightwing protests and hooliganism with corporate media houses inciting pogroms against MAS leaders and workers and indigenous Bolivians. Evo Morales backed off and called for fresh elections but the right-wingers wanted nothing short of his ouster. Then the country’s army stepped in asking Morales to step down. Subsequently, he resigned and fled the country to Mexico. This ushered in months of appalling rightwing persecution of MAS officials and activists, trade unionists, indigenous rights activists and left-wing workers.

Riding on a wave of mass movement, which overthrew the centrist president Carlos Mesa on June 6, 2005, Evo Morales, a leader of coca growers’ union, came to power on December 18, 2005, with 53.7 per cent of votes, the highest percentage for a victorious contestant in country’s tumultuous history. Bolivia is a small landlocked Latin American country with an economy less than one-thousandth size of US economy. With the neoliberal recipes and privatization of water supply, gas and other mineral resources in the 1990s the country was reeling from utter poverty, unemployment and misery. As the country’s first ever president hailing from the majority indigenous population, Evo Morales nationalized the country’s natural gas industry. Similarly, the telecommunication industry, electricity generation, water supply and mines were also nationalized. Previously, the profits from these industries went to the coffers of foreign multinationals and a meagre amount remained for the Bolivians. With the advent of Morales government, this plunder came to an end.

The nationalization of these key industries enabled the government to invest massively on public health, education, and infrastructure, community projects such as schools, clinics and subsidies for agricultural productions. As a result, poverty decreased from 59.9 per cent in 2006 to 34.6 per cent in 2017, while in the same period the extreme poverty fell from 38.28 per cent to 15.2 per cent. According to estimates, in 2018 alone the government spent $6.5bn on schools, hospitals, power plants, electrification, irrigation etc. While in 2005 this figure was a meagre $629m. The real minimum wage rose from 440 bolivares a month to 2000 a month. Similarly, through a mass literacy campaign, 850,000 people were educated and by 2008 Bolivia was declared illiteracy free. Now the country is only second to Cuba in Latin America in terms of education spending. The economy grew with an annual rate of 4.9 per cent, highest in the region.

The Morales government carried out massive land reform. According to official statistics, before 2006, 66 per cent of potentially productive land was owned by 0.63 per cent of rich landholders. The government nationalized four out of every ten hectares of land owned by private firms and distributed to landless peasants and indigenous communities. “According to the Instituto Nacional de Reforma Agraria (INRA), by 2010, 3,945,641 hectares were redistributed to 56,000 families, the majority of whom live in communities or Native Community Lands (Tierras Comunitaria de Origen, or TCO) with an average of 70 hectares redistributed to each beneficiary family”. (Bolivia’s Economic Transformation: Macroeconomic Policies, Institutional Changes, and Results By Andrés Arauz, Mark Weisbrot, Andrew Bunker, and Jake Johnston, October 2019)

Despite all these measures and the increased intervention of state in the economic sphere, the socioeconomic system of capitalism remained intact. These measures simply diverted a chunk of profits from foreign firms and domestic elites to state coffers which ultimately enabled it to invest in public welfare. The underlying capitalist mode of production remained untouched. For example, the much-hailed nationalizations were actually a renegotiation of agreements between the government and the concerned foreign firm and the increased taxes and share for the government in which neither assets were expropriated and nor companies expelled.

In the absence of a genuine Marxist revolutionary leadership and the general ebb of mass movement the Morales government slowly started drifting away from its leftwing foundations. Though the Bolivian leader openly denounced capitalism and capitalist production as the root of all problems but never took any step towards destroying capitalism. Of course, the reforms he undertook brought huge changes in the lives of ordinary people but within the confines of capitalism, even these bold reforms have a limit. As a result at a later stage, the MAS government soon fall prey to reformist tendencies which were reflected in the government policies.

As Linda Farthing, a writer and educator with 25 years experience in Latin American Study, wrote in 2017,

“After Morales’ 2014 election victory, the MAS government announced the end of nationalizations. Rumours circulated that Morales planned to nationalize Bolivian banks, which had flourished amid the commodity boom. But doing so would mean taking on Bolivia’s traditional La Paz-based elite, a potentially dangerous move given what had happened in Santa Cruz in 2008. With no social movement pressure, discourse soon changed to increasing taxes rather than nationalizing financial institutions”. She further wrote, “Nonetheless, the country’s underlying economic structure remains largely untouched. While a new class of often indigenous truckers, merchants, contraband traders and small mine owners have become wealthy, and the traditional elites have largely lost direct political power, their economic status is largely unchanged. Elites in the eastern economic powerhouse of Santa Cruz have grown even more powerful, though after spearheading a failed right-wing attempt to overthrow Morales’ administration in 2008, most now ally themselves with government.”

The United Nations honoured the Bolivian president with the title of “World Hero of Mother Earth” in recognition of his environmental protection initiatives. However, there was a huge gap between words and deeds. With a small economy and the need to fund its social and development project has put the government in the dilemma of mine extraction or the preservation of environment and the indigenous populations. In 2011, the government sanctioned the construction of a road connecting the far-flung northeastern lowland Beni with the country’s main highway. The planned road would pass through indigenous territory, the TIPNIS, which would have endangered their traditional way of life already threatened by increased deforestation. The huge resistance by the indigenous population subsequently compelled the government to put the project on hold. Similarly, the government passed a law in 2015 that allowed the hydrocarbon and mining corporations to explore 20,000 hectares, much of it in protected areas. Linda Farthing wrote, “By 2017, the government’s original discourse of societal transformation had given way to trumpeting the newfound economic stability it had delivered. In the process, its political agenda has become more centrist, drifting away from its early commitment to communitarian socialism to capitalist growth-promoting policies.” The meagerness of Bolivia’s economy and the lack of resources underline the impossibility of building socialism in a single country, what to talk of a backward and small country. These facts and the lack of a clear socialist internationalist perspective pushed the MAS towards right.

These measures and the increased influence of alien classes in the party and government caused disillusionment in the masses which was reflected in the defeat of referendum for Evo Morales who was seeking the abolition of presidential term limits. The world fall in oil and gas prices strangled the economy which constrained the government coffers to spend on social welfare programs causing further disenchantment in the masses. Sensing the diminishing support of the masses and ever growing rage of the country’s elite over his reforms, Evo Morales appointed “his” men on all top government institutions to cling to power and to thwart any coup. However, history is witness to this fact that such measures can’t thwart any coup against the populist leaders because the problem hails from the country’s powerful elites and business houses who want no government interference in their profit-mongering. They can go to any length, even colluding with US imperialism, to overthrow a government which puts restrictions on their businesses. The first and foremost task of a revolutionary government is to expropriate these elite and business classes (local and foreign) without compensation. They are the nest of all counter revolutions and coups.

Last year’s coup against Evo Morales bears many similarities with the coup carried out against populist Pakistani Prime Minister Zulfiqar Ali Bhutto in July 1977 by the then Army Chief General Zia-ul-Haq. Mr. Bhutto had all the opportunities to carry out a socialist transformation of society. He carried out some radical reforms but didn’t challenge the socioeconomic system. At his final days in power, he embraced class collaborationist policy. He was overthrown and later hanged. Unlike Pakistan, today Evo Morales and the MAS have another opportunity to complete the revolution. The coup regime was defeated thanks to the marvellous resistance of the masses on streets. The whip of counter revolution has caused the revolution to move forward but this resurgence of mass movement can’t be taken for granted. If the MAS leadership fails to overthrow capitalism, then the movement would ebb and the road will be paved for a rightwing shift. The ruling classes sensing the dwindling mass support of the MAS government will strike back and overthrow the government.

In his final days languishing in the death cell, Zulfiqar Ali Bhutto wrote these lines, which should be a guide for Bolivian revolutionaries today,

“It seems that the lesson of this coup d’etat is that a via media, a modus vivendi, a compromise, is a Utopian dream. The coup d’etat demonstrates that the class struggle is irreconcilable and that it must result in the victory of one class over the other. Obviously, whatever the temporary setbacks, the struggle can lead only to the victory of one class”.
(If I am assassinated, Zulfiqar Ali Bhutto).