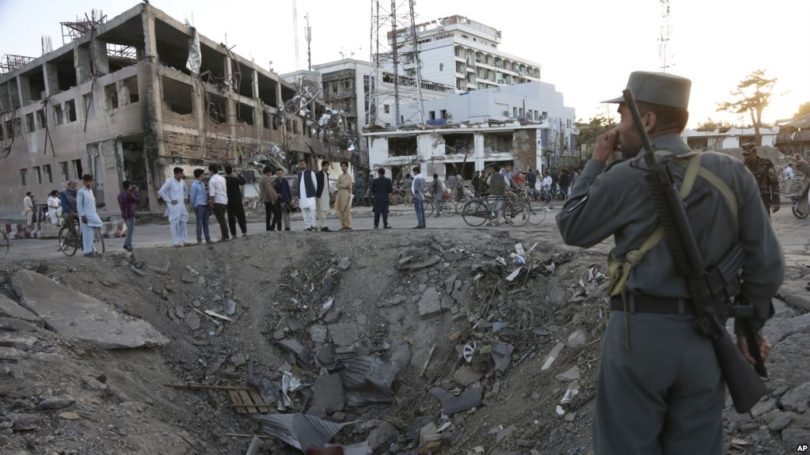 On Tuesday 17th October, the day after the four-nation talks on Afghanistan ended in Oman without any breakthrough, 71 people were killed with more than 200 wounded, in twin deadly terrorist attacks in Gardez and Ghazni. Afghan army’s ranks are already beset by corruption and desertion. The Death and destruction in Afghanistan and its spinoff effects in Pakistan are devastating the region. This ceaseless war that began with US invasion in 2001 cynically named by the imperialists as ‘Operation Enduring Freedom’ and the brutalising Islamic terrorism that began with the dollar jihad since 1978 seems endless.

Over 111,000 Afghans, including civilians, soldiers and insurgents are estimated killed in the conflict. Those who died from war-related causes are above 360,000. These numbers do not include those who have died in Pakistan in this bloody conflict. Such harrowing is this mayhem and killings that the bazaar of Sarai Shamali in North Kabul is lined with shops that engage in one of the most thriving and profitable business in Afghanistan: coffin making.

Afghanistan has been the battlefield and its inhabitant’s victims of the imperialist wars of invasion and colonialisation for centuries. In the last two centuries, the main combatants were the British imperialists and the Tsarist Russian monarchy. Rudyard Kipling in his 1901 novel ‘Kim’ coined the term, Great Game, giving a new implication to great power rivalry. Russia was fearful of British commercial and military inroads into Central Asia, and Britain was fearful of Russia annexing British” jewel in the crown”, India.

This bloodletting Great Game began on 12 January 1830 when the British colonialists started to build a new trade route to Bukhara. Their design was to annex Afghanistan and make it a protectorate. Tsarist Russia proposed Afghanistan as the neutral zone. This conflict resulted in the imperialist defeat in the First Anglo-Afghan War of 1838 and the Second Anglo-Afghan War of 1878. Meanwhile, Russia occupied Khiva, Bukhara and Kokand.

This so-called Great Game ended on 10 September 1895 with signing of the Pamir Boundary Commission protocols, when the border between Afghanistan and the Russian empire was defined. However after the Saur revolution of April 1978 with CIA’s covert operation of launching a dollar Jihad based on Islamic fanaticism and black money from the drug trade, crime and terror, a new Great Game commenced. Almost forty years ever since the players are not just Tsarist Russia and British imperialists but many international and regional powers that are wrecking havoc in Afghanistan.

There have been several negotiation processes since 2001. All failed. The latest ‘peace talks’ in the name of the Quadrilateral Coordination Group that includes USA, Pakistan, China and Afghanistan and a near-simultaneous flurry of drone strikes along the Pakistan Afghanistan border have accentuated the complexity of the conflict in Afghanistan. Its recent meeting in Muscat ended in an impasse. The so-called Taliban boycotted Muscat talks. The US sent assistant secretary of state Alice Wells rather reluctantly; the Afghan and Pakistan representatives had little optimism even before the talks began. Chinese participated mainly through their Pakistani allies.

Splintered Taliban groups are allying with different adversaries in this atrocious war. Lately, the imperialist investments in this violent conflict have increased sharply in pursuit of their political, geo-strategic and resource extortion interests. Taliban don’t really have any united representation. The American’s started this new great game and have been altering their proxy warlords and fundamentalist outfits. From the ‘Mujahideen’ under Carter and Reagan to the Taliban in the mid-1990’s to their proxies under George Bush and Bill Clinton were many and often mutually hostile. It is an open secret that US assistant secretary of state Robert Oakley helped the Mullah Omar lead Taliban’s capture of Kabul in 1996. Without US support they couldn’t have taken Kabul. This time around Pakistan’s Benazir Bhutto regime was the expediter.

After the Americans abandoned a bleeding Afghanistan, Pakistan’s state involvement expanded its policy of strategic depth. Now the Americans facing defeat are bullying Pakistan’s agencies to undo their Afghan policy. The savvy Chinese are reluctant to intervene militarily but have made huge investments to plunder Afghanistan’s resources. The Chinese elite is relying on Pakistan’s state and certain terror outfits to protect its vested interests. This has emboldened Rawalpindi and certain sections of the state hierarchy are defying the Americans. Inspite of Trump’s daunting pressure on Pakistan’s regime to curb its “Afghan allies” the outcome will not be much different with the deep state continuing the policy of running with the hare and hunting with the hounds.

Vladimir Putin posturing as a new Tsar is indulging in this new great game. His Mafiosi state has stepped up financial support to the Taliban. The Times (London) recently revealed that Russian sponsored Taliban were getting around $2.5 million monthly and involved in combat operations against US-led coalition forces.

The Indian state with its reactionary Hindutva regime apart from their business interests is also trying to threaten Pakistan’s state. With Trump’s support for India, Pakistan’s deep state will react even more ferociously. This can further escalate this conflagration. Lately, some moves made by US officials tend to pacify the situation by ‘giving Pakistan another chance’. Apart from the European involvement in Afghanistan, there is also a gory conflict between the regional Islamic powers of Iran and the Saudi Arabia. With so many rival stakeholders in Afghanistan’s imbroglio neither war nor any peace process can resolve this conflict.

The Durand line is drawn in 1893 by Mortimer Durand, the Foreign Secretary of colonial British India, at the time, divided the same peoples inhabiting on both sides. The oppressed classes here have been uprooted and displaced from their homes. The war has brought bloodshed, poverty, deprivation and misery for these mainly Pashtoon and Baluch masses on both sides of this partition. Numerous imperialist powers are intruding and devastating their ancient civilisations. These peoples have rich cultures and gallant traditions of anti-imperialist struggles. The Saur revolution is a glowing example of their revolutionary striving. Only by uniting the oppressed of the region into a class war against these imperialist monsters and bestial religious terrorists can these be decisively vanquished.