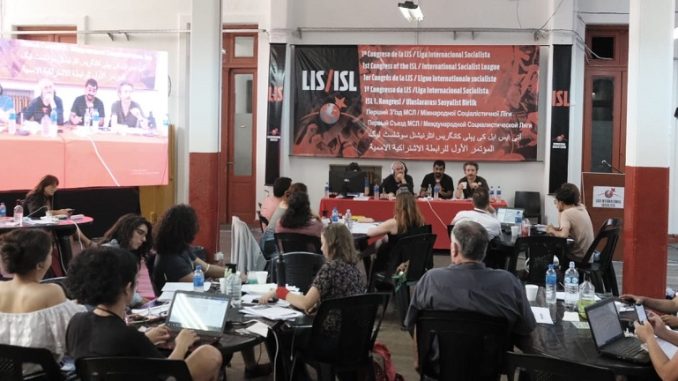 Kurdistan has been divided into four pieces after WWI: Turkey, Iran, Iraq and Syria. After the division, oppressed Kurdish people revolted many times in each region. In all of those parts, Kurdish people were massacred by the nationalist bourgeois states.

Nothing has changed for Kurdish people, or we could say that very little has been gained so far. Considering that whenever Barzani tried to carry out an independence referendum, the government of Iraq attacked Kurdish areas and nobody supported Barzani. All the Kurdish gains that were acquired through great sacrifices have evaporated. Just before the referendum decision, Barzani’s allies were applauding the Peshmerga forces while they were fighting against ISIS. However, the imperialists sold out the Kurdish Peshmerge very easily like many cases in history.

Socialists cannot support Barzani, who is a rotten feudal lord and ally of imperialism.  But, in principle, we defend the right of Kurds to hold a referendum for independence.

The Kurdish region under Turkey has a different history. It evolved from the 1968 radical student movement. Therefore, in Turkey, the Kurdish movement had a nationalist-socialist origin. But, with time, they shifted right and abandoned their anti-feudal, anti-capitalist and anti-imperialist positions. Today, the Kurdish movement has a policy of establishing a front that includes liberal capitalists, the EU, the USA and left forces of Turkey for a democratic republic and radical democracy. So, socialists should support the right to self determination of the Kurdish people, but should remain independent from the project of Kurdish national leadership.

The Kurdish people have lost too many lives, mostly of their poor, for their cause. There was a bloody civil war in 1990’s; there was an urban war in some cities between Kurdish forces and the Turkish state in 2015-16. It was a bloodbath.  There has been a heavy state pressure on the Kurdish movement.

The Kurdish people have achieved historical gains in their right to self-determination in Rojava. But the stability of those gains is not guaranteed because they can´t stand on their own. If US imperialism leaves Rojava as it did in Iraq, the Kurdish movement would not survive. Also it is the same for the Russian army too. If they let the Turkish army attack the result will be the same. In addition, if we look at history, we should say that when the interests of the US changes (or the Russians), they will leave the Kurds alone, not surprisingly.