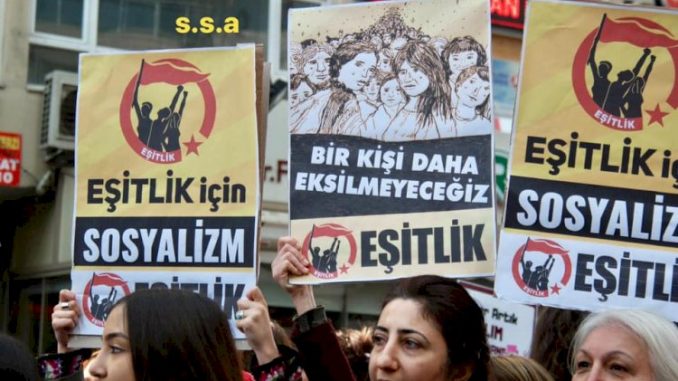 Millions of photographs are posted after Pınar Gültekin, 27 year old woman, was brutally killed by her ex-boyfriend, on 21th July. The murder sparked wide anger and fuelled protests against femicides once again.

In recent years, femicides and violence against women have been increasing. At least 20 women die every month. Despite this burning problem, Erdoğan declared that Turkey can withdraw from İstanbul Convention, which is an international agreement on gender-based and domestic violence.

Amid the coronavirus pandemic, case of violence became more widespread that is a common phenomenon around the world. In the first 8 months of 2020, 430 women were murdered.

Erdoğan’s regime promotes the police and judiciary to prevent women from divorce or rejects protecting them. Dozens of women were killed right after they asked for protection or despite the order of protection. The discourse of the government against women rights and the systematic policies encourage violence. So, the regime, the state, the government are directly responsible for femicides.

Women die before the eyes of the government.

Women Die Before Our Eyes

Pınar was murdered just in the time that government is discussing withdraw from the Istanbul Convention. In a country where at least three women is killed everyday means being on the same side with killers and being the direct organizer of misogynism. After AKP government discussed withdrawing the convention and Erdoğan ordered to “manage it” and Pınar Gültekin’s death became a well-known case, people, especially women began to post black and white photographs to react on social media with the tag #challengeaccepted. And many mobilizations, meetings, rallies organized to stop the attacks against the Convention and rocketing femicides.

The discussions about the Istanbul Convention is basically centred around the claim that it hurts the structure of the traditional Turkish family and threatens the financial and moral integrity of families. That means, women should not divorce or leave home despite domestic violence. This discussion was started by radical Islamist groups ( such as religious sects) and Erdoğan took their demands in his agenda as this perspective meet the tendencies of his regime. Big capitalists, liberals, moderate Islamist, nationalist and fascist party (coalition partner of Erdoğan) also declared their support for the convention which was signed in 2011 by Erdoğan government. Social reaction is so big that KADEM (Islamist women organization of led by Erdoğan’s daughter) declared that they support convention too. Femicides and domestic violence, which increase day by day, widely seen as direct result of Erdoğan regime. Before these declarations, surveys showed that AKP’s base see femicides as an important problem and support the politics to stop them. We can estimate that AKP will step back on 5th of August when it will declare the final decision. On the same day, women will be on the streets.

It is very dramatic to see that the law which regulates the precautions and government responsibilities about domestic violence. But it is also dramatic to see that despite popular support and increasing sympathy to woman movement, feminist organizations have no perspective to do the campaign with social content but only defends the Convention. This liberal approach agitates as if the Convention or any law or regulation can bring equality. One of the main slogan of the campaign is “İstanbul Convention keeps us alive” actually that is not true. Since the Convention is signed, femicide has been increasing steadily. The main problem is the fact that Convention does not implemented by the government because of the conservatism and the capitalist interests on family. Secondly, throughout those years, working class rights have been under continuous neoliberal attacks and large sectors of workers flew into the sea of misery and poverty. Without seeing this background, any street movement can gain new rights. That’s why, the Convention-centred feminist perspective is unable to lead big social support into the channel of a struggle of social demands. 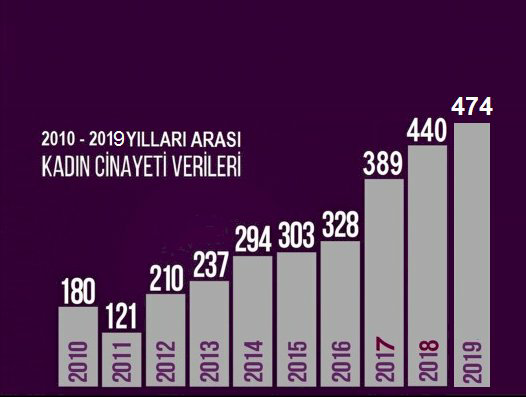 Political attacks against women rights are not only limited with the violence. In Turkey, only a third of women are employed. There are only 145 women’s shelter whose capacity is less than four thousands. There is no government budget to support women financially. Women in Turkey has no access to public kindergartens the number of public kindergartens dropped to 56 in 2016 from 497 in 2008! And private ones cost nearly half of the minimum wage. Poverty, unemployment and lack of social rights are where this growing problem stems from. Women have no right to choose! So, we have to see and act with the reality that oppression and violence has a class character.

Because of the fact that the woman movement in Turkey has basically post-modern and liberal character, street mobilizations give reactions to Erdoğan’s agenda and gain popular support but unable to gain rights and do not have any perspective to mobilize working class women. That just partially stops Erdoğan’s moves but not femicides.

Conservatism and religious implementations of Erdoğan do not fit the tendencies of the society. Turkish society is full of political contradictions. A high majority reacts oppression but this opposition potential does not meet a political leadership. The question of a political alternative is the same in women question too. So, we have opportunities to intervene the woman movement, which is a very important street dynamic, with a socialist revolutionary programme. This power may be a dynamic to strengthen the general struggle against Erdoğan’s attacks.

There is no doubt that AKP, Erdoğan or radical Islamist groups want to create a country where women just stay at their home, keep silent and give birth.This is not only the programme of AKP, it is also very compatible with the interests of capitalists. This is how they keep the minimum wage under poverty line, prevent unionization (that is only 13%), deepen exploitation. Women’s misery deeply root in the very basic class character of AKP regime. Thus, our struggle should propose a broad programme to stop femicides. However, young generations rejects oppression and inequality. If we build a battleground around concrete demands, it will weaken both AKP government and capitalist aggression.

So as Equality, woman organization of SEP, we will be on the streets in Turkey to gain our rights back, fighting for more!
Beside the main demand of “Enforcement of the Istanbul Convention”
We do campaign around the basic demands of working class women to strengthen them to have the conditions of an independent life. 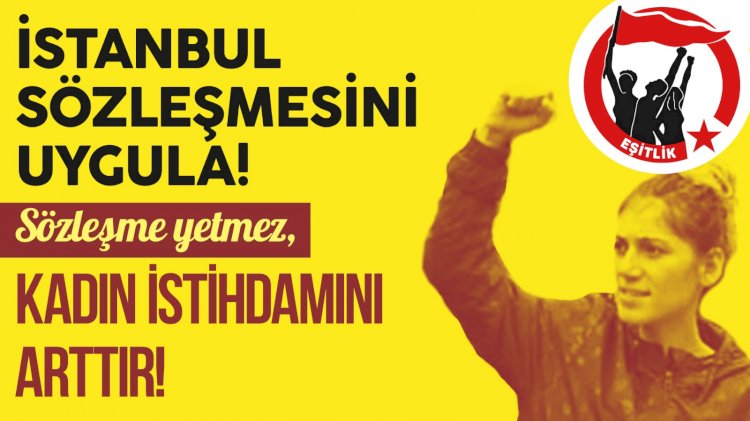 One of the campaign flyer: ” Enforce the Convention! Convention is not enough: Increase women employment”

These demands are in stark contrast with not only Erdoğan’s regime but also the interests of major capitalists such as Koç and Sabancı Holdings who declare support to the Convention. Women, should not think that everyone who favours the contract is egalitarian. Women live in hell today because of these capitalists and their governments and because of their system impose women precarious work, poverty. And this system is the reason of the violence.

No capitalist, no bourgeois politician is the friend of women or the side of equality.

Showing the AKP regime as a perpetrator alone covers the misogyny of the order and is used publicly to prevent the radicalization of the women’s struggle.

Fortunately, we know our enemies well!

Enforcement of The Convention is not Enough!

The demand to make a humane life for women without being stuck in the family exceeds the limits of the Istanbul Convention. For this reason, a woman movement that demands a social transformation against the AKP regime has to address this pandemic of femicides within a social framework.

Without attacking the dynamics of excessive exploitation, unemployment, impoverishment and the authoritarian regime; that is, there is no way to keep women alive. Bourgeois liberals just want women to keep alive, not live in equality.

It is not enough just to step back the government. We have to act to reverse everything.

It is not enough to advocate the implementation of the Istanbul Convention, we have to deal with the demands of the poor women who experience these problems in the most burning way.