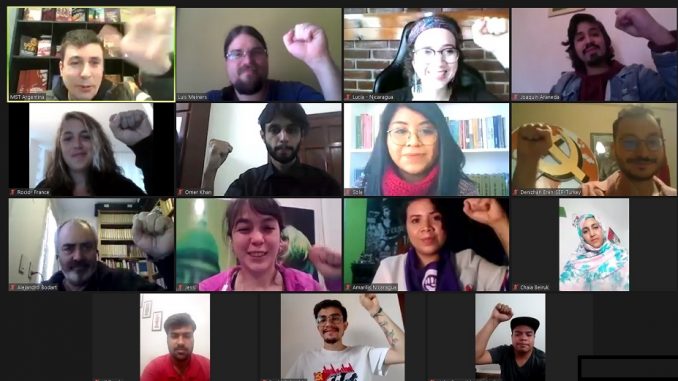 The ISL Global Youth Forum on job precarity and education was a success. With a broad representation from more than 30 countries and processes of struggle. A 100 per cent internationalist event.

After the initial welcome greeting from the ISL Coordination by Alejandro Bodart, the youth event began. In the previous weeks there had been continues activities of promoting the event on social media, in the streets, and “face-to-face” interactions with various flyers, posters and spots, digital graphics and a “multinational” production of all kinds of resources to mobilize. Hundreds of young people from 5 continents built a new international meeting with great diversity and rich debates. Thousands of the youth and workers around the world listened through various social media livestreams. From the initial reports from Argentina, Pakistan and Turkey, to the testimony of each of the countries went through the meeting. There were high points with reports with the numbers and data on job precarity and education decay, with the experiences of struggles and organization. Natalia, precarious worker from the US, recounted her own experience, she also shed light on the new situation of that country opened by the struggle against racism after the murder of George Floyd. From Australia, Nick presented the characteristics of the student movement and Ali from Lebanon moved everyone with a strong testimony of the revolutionary  currents of that country with the youth as the protagonist. Reports from Brazil, Chile and Colombia followed. The later comes from a powerful action that achieved a partial advance in its “Zero Tuition” campaign. The following speakers brought particular realities from Ecuador, Spain, France and Mexico. Central America was represented by Nicaragua, with the interventions from Paraguay, the youth from Peru and the struggle of the Saharawi people by Chaia of the Polisario Front of Western Sahara. Finally, a Ukrainian representative from Eastern Europe completed the round of speakers. As in the International Meeting in June, 5 continents were present at this event of the International Socialist League. 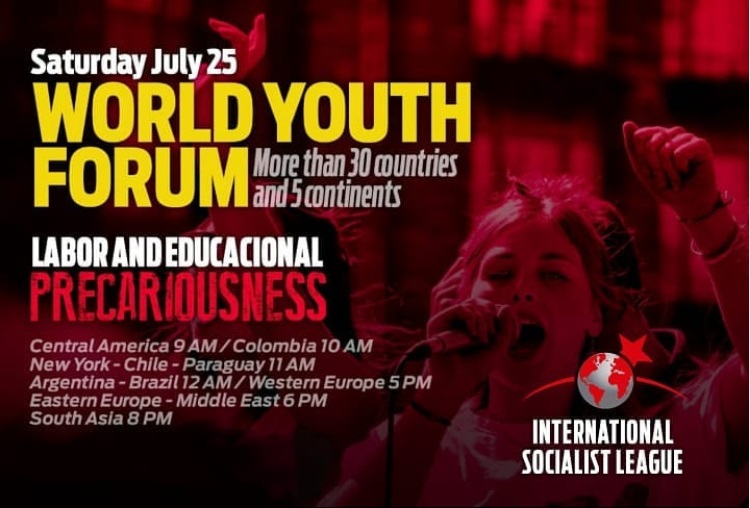 It is not an Accident or an Exception, it is the Rule

At this stage, capitalism makes millions of young people live completely precarious lives. Job precarity and education as privileges are not “accidents” of the system or situations caused by COVID, these are organic features of capitalism, specially at its present decayed stage. And in its recurring crisis, it puts into operation mechanisms that reinforce its worst face, it’s only face. To overcome the crisis, to make sure that the 1 per cent have their expected economic return, it uses the millions of unemployed people, that the crisis generates as a pressure factor, to impose worse conditions of exploitation. In this context, their agenda is job precarity as a rule. In education, the system pushes towards privatization on an international scale. This serves dual objectives, on economic side: doing business with a new and profitable “niche,” and using state money for other purposes, such as subsidizing the corporations or paying debts to the IMF. With COVID, and forced online studying, the situation of education has a new facet: digital inequality; working from home actually makes working conditions more precarious for the teachers, and it opens a window of opportunity for the capitalists and private investors in education sector, which is the business of online schooling. From Zuckerberg (the owner of Facebook and Instagram) to Bill Gates and Google, every big multinational is aspiring to invest in this branch of the digital industry, betting on making education a “virtual”, “distance” process, without teachers, pedagogically impoverished, standardized for students and very profitable. At the ISL Forum, a conclusion was made very clear to the hundreds of young workers and students who participated: capitalism is precariousness and turns education into a privilege.

On the Front Lines

There are two trenches in the war that capitalism has declared against the youth: in one, there are the capitalists, the traditional parties and the union bureaucrats. In the other, the precarious workers and students. Therefore, we have to make our own politics and have our organizations. The Forum left a general consensus: the ISL must be at the forefront to support the struggles of the student movement and working class youth. And at the same time, to propose to the advanced activists of those movements, with the need to organize politically with our parties and groups in each country. We raise worker-student unity as a banner towards a socialist perspective. And more than ever in the world that is emerging, where youth protests tend to internationalize.

In short, it was a great event. A meeting of fighters, of activists with a purpose: to turn everything over.