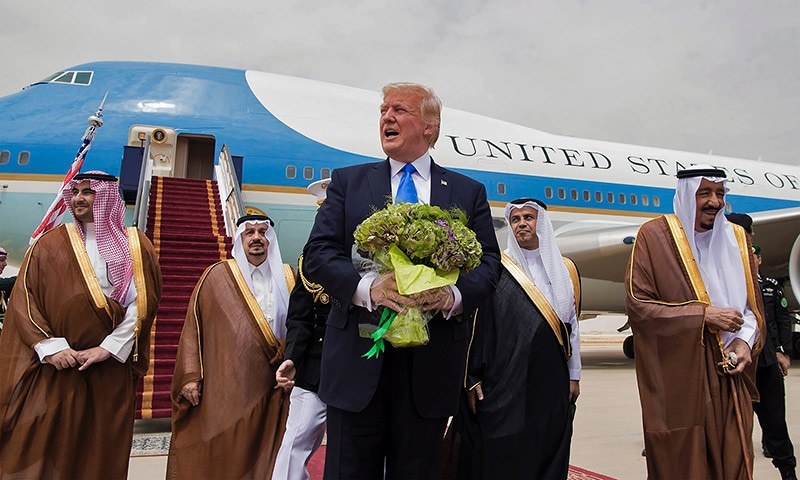 Donald Trump’s first foreign sojourn that began in Riyadh, Saudi Arabia moving on to Jerusalem and Vatican the bastions of the three monotheistic religions has clear implications for resurgence of the US imperialism’s policy of religious rivalry and hatreds, albeit with the rhetoric of peace and religious harmony. Historically religion has always been an important tool at the disposal of the ruling elites to peddle into politics to create divisions to facilitate loot and plunder since the post-Renaissance period when the capitalist states assumed an imperialist role. It has also been used to dupe the working masses with fake talk of interfaith harmony that actually creates an identity and a religious sentiment that did not exist in the social and cultural ethics of many societies for decades. It’s an historical irony that as far back as 1916 Mohammad Ali Jinnah, at a public meeting of the All India Congress Party in Bombay, had warned Gandhi of the catastrophic ramifications of the intruding religion into Indian politics in the garb of uniting people of different faiths, only to augment religious issues and prejudice in the political agenda.

The US imperialism deliberately used religious sentiments to impose their oppressive capitalist system and to counteract the massive uprisings of the masses in the former colonial world, particularly in the Middle East during the post World War II period. In the process nurtured and financed of the modern political Islam and violent fundamentalist frenzy. The Suez War of 1956 and the subsequent revolutionary movements that were beginning to spread throughout the Arab world and far beyond this criminal and divisive policy of the US imperialism was deviously applied to break the unity and morale of these revolts.

Every US administration has adhered to this policy ever since. After the end of the so-called Cold War, the veteran CIA ideologue Samuel Huntington gave it a new twist with his notorious theory of ‘Clash of the Civilisations’. While in the past Islamic Jihadists were used by the imperialists against left wing governments and movements, in this new version Huntington resurrected religious politics to drive a wedge in the class unity and a horrifying scare for the working class movements. Inspite of his ravings, Trump does not have any new foreign or domestic policy. But the present-day imperialist masters are prodding the ancient dictum from the ancient Roman Caesars of ‘divide and rule’. This time around the theme is based on religious and sectarian rivalries.

Trump’s maiden foreign visit to Saudi Arabia indicates that he has no problem with the autocratic Saudi monarchy and other dictatorial regimes in the Middle East and other parts of the world as long as they are buying arms worth billions of dollars from US military industrial complex. The Saudis coerced and bribed over fifty-five head of states of Arab and Muslim countries to attend a summit in Riyadh at which Trump declared “America will not seek to impose its way of life on others.” He was lecturing like a colonial master while denying of giving a lecture. Most people on the streets in the Middle East and the Muslim world could see through Trump’s hollowness and the ostentatious nature of the Riyadh summit. But instead of Muslim unity, it has exacerbated the sectarian rivalries and hatreds between the Shias, Wahhabis, Deobandis Barelvis, Salafis and other Islamicist sects.

Trump’s bashing of Iran and its allies such as the Syrian government of Bashar-al-Asad, Hezbollah and other Islamic militias in Iraq and Yemen will escalate the sectarian divide and devastate the already crumpling harmony in these so called Muslim lands. The Muslim heads of states attending the summit are mostly despots, powered by moneyed democracies and monarchies. All of them are in crisis and clinging on to power seeking American help for their collapsing economies and their debauched and sagging rulerships. The irony is that the imperialism whose support they are so desperately seeking is itself in the throes of an economic and historic decay. With the increasing tensions between the two most powerful regional states, Iran and Saudi Arabia, both based on their own versions of religious orthodoxy, have threatened to take the war into the main lands of these states.

The Saudi vicious monarchs flaunted Trump’s visit to brag about the support of their imperial masters. Israel was not even mentioned as a destabilising menace in the Middle East what to say of being subjected to criticisms by the Arab rulers such as Fateh Al-Sisi of Egypt and King Abdullah of Jordan who both were rewarded with the privilege of addressing the summit. Behind the scenes, there has been unprecedented intelligence sharing and military coordination between these conservative Islamic monarchies of the region and Israeli Zionists in the last decade or so.

The arrogant and blusterous Trump vilified The Al Saudi dynasty before he got elected but Trump the president has been tamed by the Washington establishment and has retracted most of his campaign rhetoric. The US bourgeois state has prevailed and the corporate capital has Trump in total control. After all, he was and is from their ranks. Hence in pursuit of Washington’s strategy of imperialist hegemony he extracted massive sums from the Saudi’s and other Gulf oligarchies, paid up generously in Jerusalem and reached Brussels to cut US expenditures in the NATO’s aggressive wars. 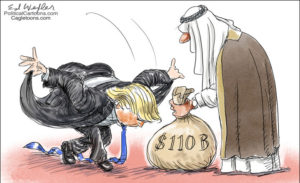 After signing a joint “strategic vision” that includes $110 billion in American arms sales to the Saudis, Trump exclaimed, “It was a great day, tremendous investments in the United States. . . and jobs, jobs, jobs.” In addition to investment in arms, the Saudi overall investments are well over 350 billion dollars. Trumps Iran bashing cost the desperate Saudi Monarchy a fortune that no other US president could extract in a single visit and the first one at that. But that won’t change much on the ground and the balance of power in the region. The Saudi’s might have been to lavish in throwing away such massive amounts to buy US support in this period when their oil revenues are declining and the monarchy is being forced to make cuts, endangering a social unrest that could threaten the regime’s existence. The financial times commented, “ Saudi and its conservative Gulf allies will be hard-pressed to match Iran, even with their new arms purchased from the US. It is unlikely, too, that Mr. Trump will want to translate his anti-Iranian rhetoric into a full-fledged anti-Iranian policy, given what that would entail.” On the other hand, US aircraft manufacturing giant Boing is moving ahead with their 777 passenger jets sale to Iranian airlines worth around $20 billion.

At the airport tarmac in Jerusalem addressing a joint press conference with Israeli prime minister Benjamin Netanyahu Trump praised Israel, saying it had “built one of the great civilisations: a strong, resilient, determined nation…forged in the commitment that we can never allow the horrors and atrocities of the last century to be repeated”. While Trump administration has announced cuts in the foreign aid in the coming budget it will grant Israel $3.8 billion annually up from the $3.1 billion pledged under the previous agreed-upon MOU, starting in 2018 and through to 2028. The US regimes have been carrying out severe cuts and austerity measures against the US workers and the poor for years. Now the foreign expenses and aid are being slashed.

The MOU signed between Washington and Jerusalem is the United States is the biggest defense aid package to any country in history. Such funding is allocated to a numerous of Israeli military projects including the Iron Dome missile interception system, the Arrow 3 long-range interceptor program and David’s Sling mid-range rocket interceptors. On the other hand, the imperialist masters have relegated the slavish rulers of countries including those of Egypt and Jordan and they will suffer the cuts in their aid ranging from 28.5 to 37 percent in US military and economic aid.

However, the NATO cuts would annoy the America’s European allies but with record ballooning deficits the US imperialists are forced to cut down on all sectors of their vast expenditures particularly the military and warfare costs. But this leads to denting of their imperial hegemony. Trump promised in his campaign to cut back foreign military adventures in Syria and Afghanistan. Now he has been forced to fire cruise missiles from US warships in the Mediterranean and an increased deployment of US forces in Afghanistan. Imperialist hegemony and the dwindling economic power have now come to haunt Trump and he is trapped in this contradiction.

These conflicts and contradictions are not getting resolved in the coming period. Instead, they are worsening all over. With heavy military presence from Japan and Korea to Germany and Latin America, the US military bases are scattered all over the world. In reality, the American rulers can’t afford to run them anymore. But that means the demise of the imperial status of the ‘only superpower’ in the world. The trump era will be faced with unforeseen conflagrations and convulsions. But this instability around the planet caused by the crisis of an obsolete and redundant capitalist system cannot crush the oppressed working masses in these lands for long. When the Arab revolutions swept across the region in 2011 very few had foreseen the disastrous ramifications of its ebbing and recoil. If now the region is littered by imperialist aggression and fundamentalist terror there is pessimism all around. But this situation will also change. A new upsurge of the oppressed toiling classes is inevitable in the coming period. Such a movement shall cut across the sectarian, religious and narrow nationalist prejudices. Its victory is the only way out of this devastation, bloodshed, misery and deprivation. Such a victory will only be possible through a revolutionary party, strategy and leadership.