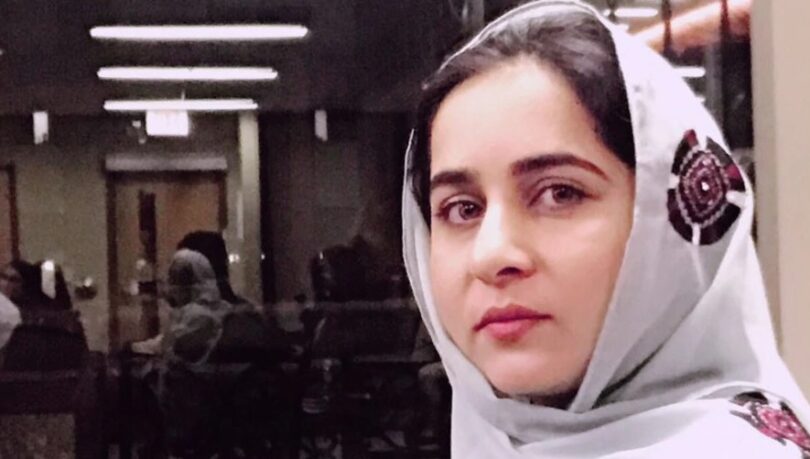 The renowned Baloch activist Karima Baloch was found dead in Toronto after going missing for a day. As per the account of her husband Hammal Haider, on Sunday 21st December she went for a walk on Toronto’s Centre Island, which she often did, but never returned. The Toronto police had appealed for information regarding her whereabouts on Twitter. The next day her dead body was found on the island. Earlier this year another Baloch activist and journalist Sajid Hussain also went missing in Sweden and later his body was found in a river. This is a new round of horrible incidents in which the exiled Baloch activists are going missing and later they are found dead in the so-called “democratic” and “free” countries. Such horrible acts of blatant murders show to what extent the powers-that-be are feeling threatened by a renewed upsurge in the Baloch movement fighting against the national oppression. Such assassinations are meant to silence the rising voices against the national oppression and exploitation in Balochistan but every new incident is giving impetus to the movement against national oppression.

Karima Baloch was the former chairperson of left leaning, Baloch Student Organization (Azad). The organization was the most vocal group regarding the national oppression of Balochistan and openly advocated for cession. Countless activists of the organization were forcibly disappeared by the authorities. The organization was later banned by the government. Karima was compelled to leave Pakistan in 2016 and sought asylum in Canada. There she continued her activities against enforced disappearances and Baloch oppression. According to her husband, she regularly received threats on phone and trolled on social media.

There is a long and tumultuous history of struggle against national oppression in Balochistan in which Baloch Student Organization and its different factions played a prominent role. Thousands of Baloch youth sacrificed their lives in this series of movements against national subjugation of Balochistan. Historically, there have been four major armed rebellions in Balochistan against national exploitation and oppression. The ongoing struggle is probably the longest one which kicked off at the outset of the twenty-first century and is still continuing with all ebbs and flows.

On the other hand, the response of state authorities to this rebellion has been ruthless. The struggle was dealt with ruthless military operations and thousands of Baloch political activists were abducted, killed and then their bodies were thrown. According to Baloch nationalist parties and activists, the authorities nurtured numerous lumpen and fundamentalist outfits tasked with crushing of all kinds of dissident voices in Balochistan. The Baloch political activists term these outfits as “death squads”. They are actually gangs of criminal elements enjoying the patronage of authorities.

But recently the struggle against national oppression has experienced a new transformation. It has taken the form of radical political activism. The earlier armed struggle has left deep imprints on Baloch youth and they have drawn valuable conclusions through their experiences.

In May this year, a Baloch woman Malik Naz was killed in Turbat (Balochistan) during a house robbery by a gang of notorious “death squad” and her daughter was severely injured. This sparked off huge protest demonstrations all across Balochistan. Though the immediate trigger of events was the unbridled criminal acts of “death squads” but the underlying cause runs deep into the history of decades of national oppression. During these protests, the speakers made speeches against state oppression and national exploitation. A few months later another horrific incident occurred in Turbat in which a young Hayat Baloch was brutally killed by paramilitary personnel. The incident set off another series of protests and demonstrations all across the province. Solidarity protests were also held in major metropolitans of the country.

During all these protests Baloch women were playing a leading role. Among them, Mahrang Baloch is the most prominent leader during all these events. She has become the public face of the political revival of struggle against national oppression. These protest demonstrations are a turning point in the long struggle against national oppression in Balochistan. These protests have garnered support from other provinces and nationalities which previously remained aloof to the atrocities and oppressions in Balochistan.

The tragic death of Karima Baloch will engender further mobilizations and protests. The Baloch Yakjehti Committee (Baloch Solidarity Committee) has already called for protests against Karima’s murder. The death of Karima in Canada has exposed the ugly face of imperialist powers who hypocritically pose as defenders of free speech and democracy but at the same provide sanctuary to all kinds of proxy criminals who conduct their criminal operations against dissidents with complete impunity. For them, the plight of oppressed nationalities is simply a tool to blackmail and extract favourable deals from their rivals. If Karima was from Venezuela, Cuba, Iran or any country not in the good books of imperialist powers they would have moved heavens and earth to find the culprits and then hypocritically incriminate the governments of those countries. The imperialist powers are no friends of oppressed nationalities. The only friends of oppressed Baloch are the oppressed masses of other nationalities.