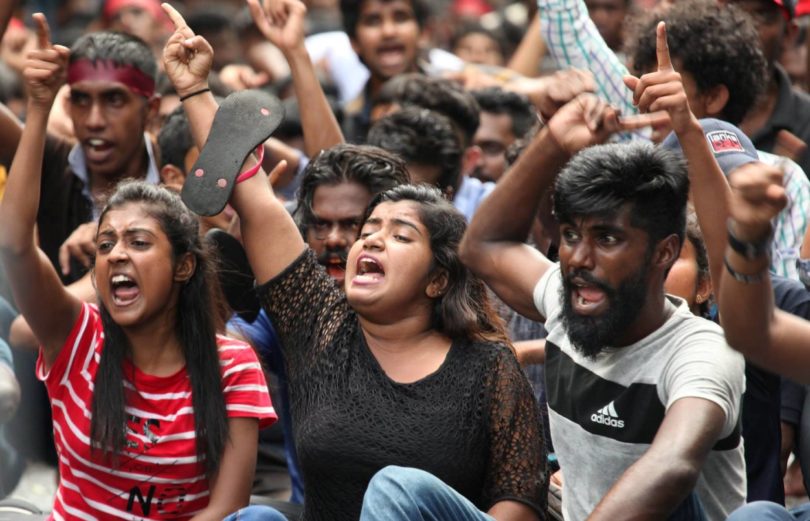 Free education in a Sri Lanka is a product of the marvellous struggle of Sri Lankan working class which was led by leftists. Free education bill was passed in 1947 which ensured free education from school to university level and necessary funds were provided by the government.

The neoliberal Reforms and the Education

With the introduction of 1977 neoliberal reforms; privatization of state-owned institutions started. This program was prepared to satisfy the needs of the global capitalism. The government started to privatize all government institutes including education, health and the social welfare services.

The capitalist government robbed all the rights of people through economic terrorism. The government tried to suppress all the progressive forces including political parties, trade and student unions. In order to save Free Education, student movements erupted and State resorted to worst kind of repression. Hundreds of the students had been killed. Since 1981, during the struggle for nationalization of private medical colleges, around 129 medical students have lost their lives till now. After 17 years of autocratic rule, in 1994 parliamentary election were held. Many reforms that were previously won through struggle had been acknowledged by State. However all preceding governments continued on the path of neo-liberalism and paved on pro-capitalist policies of annual grants cuts, closure of public varsities and so on. These policies had drastic effects on lives of students, free education rights were pruned to satisfy needs of market.

2009 was an important year in the history of country when the 30 years long civil war ended. The state used this opportunity to crush people rights movement. It carried out implementing neoliberal and fascist policies. Killings became norm, fear environment prevailed. To raise voice or protest for rights became great crimes whose punishment was not less than death. Mass suppressions and arrests were made. According to some estimates around 1500 students were suspended from their institutions and around 300 activists were imprisoned and around 3 students were killed.

As a step towards Militarization, State began to equip students with military training and retired soldiers were recruited for security services in the universities. With all these, they aimed to cripple the student movement and public sector. They favoured private schools and universities throughout the country. In the same period, they tried to prune government funds and passed laws to charge fees from the student. In 2011 they tried to pass a private university bill. However, they retreated from this after facing strong resentment from the students. The students heroically fought against all threats and owing to the pressure of students movement the government fell from power.

After the defeat new government came to power. They promised good governance and democracy but began to act opposite. Same as their preceding rulers, they started to crush the fighting forces and citizen’s rights. On dictations of imperialist’s financial centres i.e IMF & World Bank, the government continued to travel on the slippery road. In fact, It is robbing the people’s rights. It provides tax concessions to capitalist and heavily taxed the common people. Rulers are selling public institutions and farming lands to multinational corporates. They are weakening the labour laws and robbing the benefits of pension etc… The government is selling the education and health and crushing all the forces that stand against them.

The students at present are standing against private universities and South Asian Institute of Technology and Medicine (SAITM). This struggle started in 2008, Its still continue with same vigour. All the university medical student of the country has started boycotting lectures for last ten months. But the government has taken the side of SAITM. They have started a massive suppression against these students. The government has filed cases against hundreds of students and they have imprisoned convener of medical faculty student action committee for about two months. The government has launched mortal police attacks.

This type of depriving people’s education and other rights is not only confined to Sri Lanka. It’s happening in all over the world. The economic crisis has revealed system’s true nature. The policies of IMF and the World Bank only benefit the bourgeoisie for their profit-making objectives. On the other side, the youth and students are fighting for their education rights. But we think that it is not easy to win the students’ right as individual groups. We hope that all anti-capitalists and progressive forces should unite. All forces which are fighting for their rights must stand against brutal capitalism. We appeal all the socialists, communists and progressive activists around the globe to support the struggle for free education in Sri Lanka and all over the world, like Revolutionery Students Front (RSF) extended its support.

Free Education is a RIGHT, not a Privilege!

Free Education Around the World!