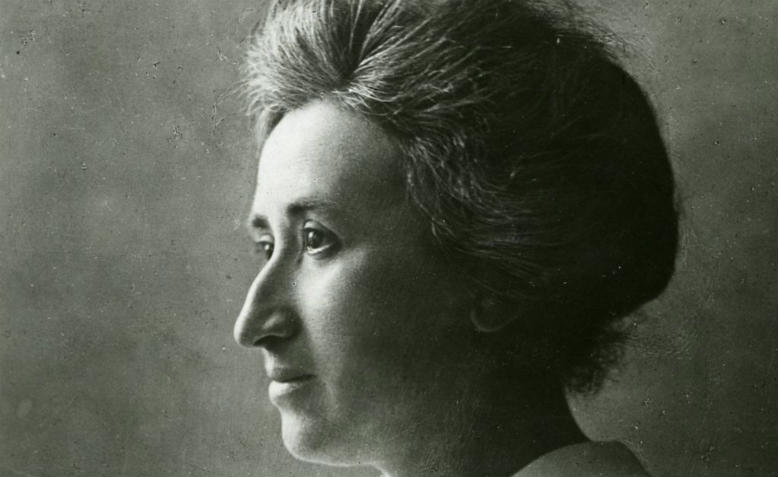 We cannot let March 5 go by without paying tribute to one of the greatest socialists produced by the German labour movement, Rosa Luxemburg, who was born on this day 150 years ago.

She was born in Russian-controlled Poland, literally days before workers in Paris decaled the Paris Commune, into a relatively well-to-do family. From a relatively early age, as a school student, she became involved in the workers’ movement in the Proletarian Party. When the party leaders were executed for the part they played in a general strike, Rosa Luxemburg was obliged to flee to Switzerland, where she eventually attended the University of Zurich.

In Switzerland she was immersed in the rich medium of socialist exiles from other parts of Europe, including the Russians. Although Polish born, Rosa was fluent in German and Russian and she developed her own ideas on Polish socialism, its links with Germany and the programme for Polish national independence. She saw the Polish National Question through the eyes of a committed internationalist and she believed, therefore, that the road to Polish national freedom ran through the German revolution.

There were sharp disagreements at this time between Luxemburg and Lenin, who argued that the fundamental slogan on the National Question ought to be the right of nations to self-determination. This controversy and debate is still worth examination today. But for all their political differences, both Luxemburg and Lenin approached the National Question as resolute and unwavering internationalists, a fact that they both acknowledged.

Luxemburg moved to Berlin in 1898, having been given the right to settle there through a marriage of convenience to an old long-standing friend. It was while she was in the women’s section of the SDP that she met and began her collaboration with Clara Zetkin, who was to become a lifelong friend.

Clara Zetkin and Rosa Luxemburg in 1910

Luxemburg’s internationalism was put to the test, along with the internationalism of the whole of the SPD and the Socialist International with the outbreak of the First World War in August 1914. As Mary-Alice Waters writes in Rosa Luxemburg Speaks, the SPD “was a powerful and impressive organisation; it was the great party of the Second International…in 1912 for example, the SPD won four and a quarter million votes, or 34.7 per cent of the total, making it the largest party in the Reichstag, with 110 deputies…the party published ninety daily papers which reached 1.4m subscribers. It also had a large women’s movement, a youth section, cooperatives, sports and cultural organisations and several million workers in social-democratic-led trade unions…”

Despite this enormous political influence, the leadership of the SPD was rotten; it had become infected, by the decades of relative economic upswing, with the ideas and philosophies of capitalism. Like the labour compromisers of today, they became imbued with the idea that the capitalist mode of production was the ‘natural’ order of things and that the socialist movement had to limit itself to gradual improvements and reforms. A necessary by-product of their outlook was the support for ‘their own’ capitalist class in the war against other states.

In the event, therefore, Rosa Luxemburg was among a small minority of international socialist leaders who refused to support the war. Along with her comrades Karl Liebknecht, Clara Zeitkin and Franz Mehring, she co-founded the International group (Die Internationale), which later became the Spartacist League, a movement based on revolutionary Marxism and workers’ internationalism and in the League she continued to struggle for socialist and internationalist ideas during the war years. As a result of their anti-war work, including penning several leaflets, Luxemburg and Liebknecht were imprisoned, in June 1916, for two and a half years, until the outbreak of the German Revolution in November 1918.

Germany in those following weeks following November was a maelstrom of revolution, strikes, demonstrations, occupations, meetings and yet more meetings. Strikes following strikes, each more intense and extensive than the last. In his marvelous book on the German Revolution 1917-23, Pierre Broué cites Luxemburg writing at the time:

“Now I regard it as the very essence of this revolution that strikes will become more and more extensive, until they constitute at last the focus of the revolution. Thus, we shall have an economic revolution, and therewith a socialist revolution. The struggle for socialism has to be fought out by the masses, by the masses alone, breast to breast against capitalism; it has to be fought out by those in every occupation, by every proletarian against his employer. Thus only can it be a socialist revolution.”

By this time, the most radical elements of the Independent Social Democratic Party (USPD, itself a left split from the SPD) were moving closer to the revolutionary outlook of the Spartacists and plans were put in place for a founding conference to fuse as a mass revolutionary party, a German Communist Party.

Despite the enormous potential of the Communist Party, the fusion conference ended only on January 1, and it did not include all of the membership of the USPD, largely because of the timidity of some of its leaders. The new Communist Party, therefore, was not really consolidated and lacked sufficient and deep roots within the working class across the whole of Germany.

It was therefore unable to prevent a premature uprising by the working class in Berlin in January 1919, premature in the sense that it was a movement relatively isolated from an all-German perspective. This was to become known as the Spartacist Uprising because it was, in effect, the relatively small Spartacist League, which put itself at the head of the movement.

Broué describes the movement as it unfolded in Berlin. “The protest developed on a scale which surprised the organisers themselves. The heart of the capital was occupied by hundreds of thousands of demonstrators.” Despite the scale of the struggle, Broué writes, “the masses were not ready to take power…Despite hundreds of thousands of strikers, there were altogether less than 10,000 men determined to fight.” Nevertheless, it was the former leaders of the Spartacist League, the most resolute sections of the workers leaders, Luxemburg and Liebknecht, who felt they had no alternative but to offer a lead to this movement.

When the forces of reaction recovered from the initial shock of the Berlin strikes and demonstrations, they began to organise bloody reprisals against. On the night of January 10-11, many members of the former Spartacist League, including some of its leaders, were arrested and summarily murdered.

On January 11, almost frantically, Luxemburg wrote an appeal over the heads of the leaders of the USPD, who were vacillating when they ought to have been giving a clear revolutionary lead. “The absence of leadership,” she wrote in Dei Rote Fahne, “the non-existence of a centre to organise the Berlin working class, cannot continue…the revolutionary workers must set up leading organisations able to guide and to utilize the combative energy of the masses.”

Reaction, in the form of the ‘Free Corps’ were by now actively seeking to strike at the head of the Berlin workers’ movement, and Luxemburg and Liebknecht, already in hiding, were discovered and arrested on January 15. Both were interrogated and brutally murdered by their captors, Rosa’s body being flung unceremoniously into a canal. Her murder and that of Karl Liebknecht, undoubtedly played a key role in the derailing of the German revolution and the rise of Nazism in subsequent years.

Had Rosa Luxemburg lived beyond 1919, she would have been the giant of the German workers’ movement. She would have been one of only a handful of Western European socialist leaders who would have had a theoretical and personal stature comparable to the two leaders of the Russian Revolution, Lenin and Trotsky. Unfortunately, it was not to be.

German student demo in 1968, with pictures of Rosa Luxemburg

We have to pay due tribute to the work, the struggles and the enormous contribution of Rosa Luxemburg to the socialist movement. In fact, this short tribute is nowhere near enough to pay homage to the career of one of Europe’s greatest socialist activists and thinkers.

Activists in the labour movement today could still learn much from her writings and from her example. They should study her works and her writing from themselves, here for example, in Selected writings of Rosa Luxemburg, or in Rosa Luxemburg, Socialism or Barbarism, here. We should make sure that in the struggles for socialism we never forget the pioneers on whose shoulders we all stand.