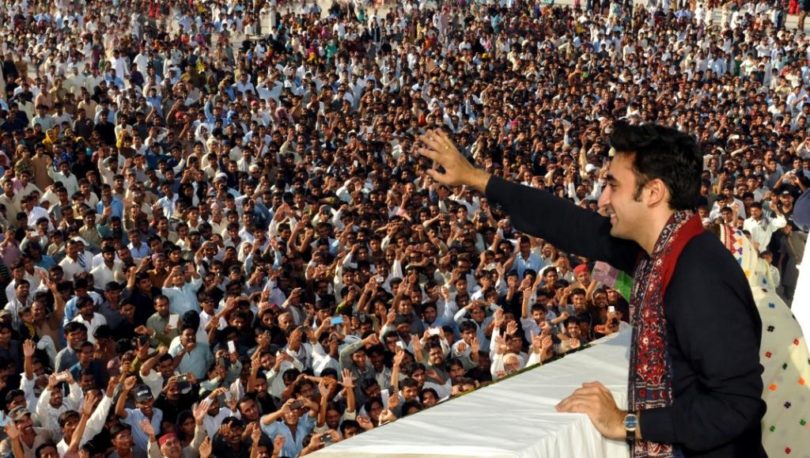 The renowned US author and progressive thinker Gore Vidal, analysing the US political setup, once wrote, “There is only one party in the United States, the Property Party…and it has two right wings.” Vidal was referring to the Republicans and the Democrats, whom he characterised as representatives of the ruling class, who have obvious cursory differences but are fundamentally there to preserve the exploitative capitalist system and imperialist hegemony. In the present political scenario, in the last analysis, there is also one bourgeois party in Pakistan, with many right wings. However, Pakistani capitalism is much too rotten and in a catastrophic condition, reflected in the ugly squabbling between these lumpen politicians, all subscribing to this same coercive system. From the religious right to the PPP, all mainstream parties adhere to this very capitalism.

This was not always the case. After partition, the first time the working classes erupted into a mass revolt that challenged this exploitative system was in the 1968-1969 revolution. Contrary to generally fabricated perception, the emergence of the PPP as a mass force of the oppressed classes was not a result of its electoral victory in 1970, but was the political byproduct of the upsurge, and it gained mass support because of its proclaimed programme of revolutionary socialism. But, in reality, it was a populist party espousing socialism and not a Marxist-Leninist party that could have led the arisen masses to a revolutionary conclusion. In the absence of such a party, the PPP assumed the mantle of the tradition of the masses in the class struggle. It was only during the first PPP regime, in the early 1970s, that the pressure from below, though already receding, pushed it to implement the most radical reforms in favour of the toiling classes.

However, these reforms inevitably failed to accomplish the desired aims of the masses, trapped in the confines of a weak and debilitated capitalism. This ultimately paved the way for the resurgence of the right and the imposition of Ziaul Haq’s vicious martial law. Bhutto was hanged for his halfhearted acts against the capitalist class and the masses had to endure the brutality of Islamic state terrorism under Zia, which was the revenge of the elite and imperialism against the mass revolt of 1968-1969. Ever since, the subsequent PPP leaderships have been on a right wing binge to appease imperialist masters, the oppressive state and the exploitative ruling classes. In the absence of a revolutionary alternative, the masses stuck to their political tradition, in spite of its consecutive regimes toeing anti-worker capitalist policies. During the last PPP-led regime of 2008-2013, the oppressed classes were devastated by the onslaught of neoliberal economic aggression. The party was subsequently routed in the elections. At present, the PPP’s support base is demoralised and its leaders discredited.

Now the PPP’s hierarchy, with the support of sections of the ruling classes and the media, is trying to prop up Benazir and Zardari’s son, Bilawal, to somehow resuscitate the dwindled fortunes of the party. The dynastic cult is being accentuated to prop him up as a charismatic leader. All emphasis is on the form and not much on the content — the basis on which Zulfikar Ali Bhutto rose to the heights of iconic popularity. At present, critics are focused only on the personality cult, whether for or against Bilawal, ignoring the epoch and level of consciousness of the oppressed masses. They suffer contemptuous political indifference after what they have suffered at the hands of their traditional leaders.

On the 13th death anniversary of Zulfikar Ali Bhutto, Abdul Hafeez Pirzada, probably his closest confidant, said in a television interview, “The most crucial reason for the decline and ultimate demise of Bhutto was his pursuance of two contradictory ideologies: socialism and nationalism.” Bilawal is in a commotion of nationalist rhetoric on Kashmir and other issues, while reluctant, even terrified to use the words “revolutionary socialism”. It was this call and championing of irreconcilable class struggle that made Bhutto the most cherished leader in Pakistan and turned the PPP from a small group of a few hundred into the largest party almost overnight. It was this promise of revolutionary change that gave hope and courage to the oppressed and made the PPP a tradition that endured for three generations. Imran, Qadri and other right-wing populists are already whipping up nationalist chauvinism that is already losing its appeal for the teeming millions plunged into the abyss of misery and poverty. It is mainly the erratic middle classes that make up the support base of these reactionary demagogues.

The helm of the PPP cynically applauded the Machiavellian manoeuvres of the top leaders, infatuated more than most by the prevailing reactionary cliché: “Socialism is finished.” It has become a sin even to talk of revolutionary socialism in a party that owes its existence to this very slogan. These pygmies-called-intellectuals cannot even see that it was on the basis of revolutionary socialism that, just this week, Evo Morales won a massive landslide in Bolivia for a third consecutive term. The electoral victories of radical leftist candidates in Venezuela, Ecuador, El Salvador and other countries in Latin America and elsewhere overwhelmingly refute the venomous media propaganda that socialism has become an electoral liability. However, with the sections of crony capitalists and corrupt real estate bosses financing the PPP aristocracy and directing the party’s affairs, Bilawal dare not utter the forbidden word.

However, it also cannot be ruled out that, in his desperation, he might go for more radical rhetoric on the advice of those who have been masquerading as the PPP ‘left’ in order to give these lumpen capitalist leaders a progressive cover. That might be too little too late. The masses have suffered and have been let down by the PPP leaders time and again. Now they will not easily believe in this ‘shift’ and shore up enough courage to rise in support of such a tradition. But the eruption of a mass movement can cut across the whole process. It can transform the PPP and force it to its socialist origins but on a much higher plane, and will require a drastic purge of the usurper hierarchy. Such a development would cleanse the PPP of those who have brought it to such a decline. But if that course is resisted by these incumbents, an alternative revolutionary Marxist tendency can rapidly rise from the movement of the workers and the youth. No matter how things transpire, the victory of the masses’ class struggle can only be achieved through the revolutionary transformation of society. The PPP’s founding documents were unambiguous about it: “Only socialism, which creates equal opportunities for all, protects from exploitation and removes the barriers of class distinction, is capable of establishing economic and social justice. Socialism is the highest expression of democracy and its logical fulfillment.”