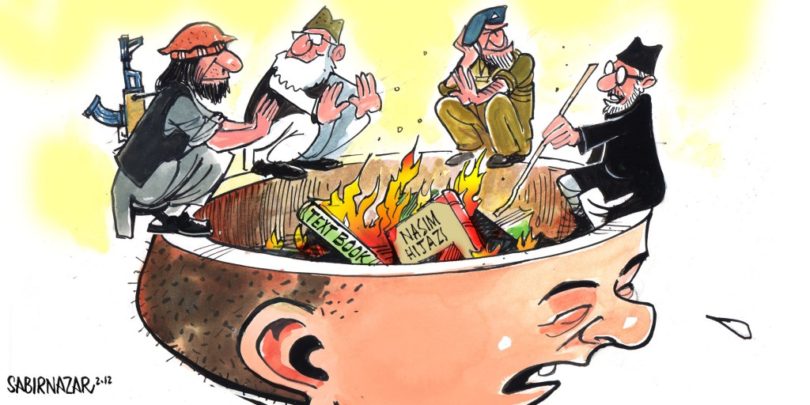 After the collapse of the Soviet Union and the capitalist counter-revolution in China, an immense political vacuum opened up in ideology and politics on a world scale. In these conditions there was the resurgence of political Islam and religious fundamentalism.

The sectarian conflicts of the warring religious sects, from Islam to Judaism, Hindu chauvinism and Christianity, have raised their ugly heads, leading to terrible bloodshed, cruelty and slaughter, mostly in the former colonial countries, and particularly in the Arab and Muslim societies. From the black reaction of ISIL in the old Levant to the ferociously bestial Taliban in Afghanistan and Pakistan, these Frankenstein’s monsters created by imperialism in the past have wreaked havoc and are raising the spectre of barbarism in several areas. These very imperialist bosses are now howling through their reactionary media about the menace they themselves have nurtured.

The recent architect of the reactionary theory of the “Clash of the Civilisations” was the notorious “butcher of Vietnam”, Samuel P. Huntington, the CIA’s foremost theoretician in the 1990s. This theory was designed to foment religious conflicts in societies both East and West, in order to cut across the impending waves of class struggle. Although the reactionary role of religious fundamentalism is not a new phenomenon, its character dramatically changed with the rise of capitalism and imperialism. The social relations and the class antagonisms that arose from the capitalist mode of production, and the uneven and combined patterns of socio-economic development in the colonised countries, exacerbated religious prejudices, which rose to the fore in periods of reaction.

Although most forms of these religious fundamentalisms have ancient roots, they are at the same time modern, and also a response to this modernity. For example, Christian fundamentalism was rooted in the rejection of American and British Protestants of the perceived theological liberalism and cultural modernity of the late 19th Century and early 20th Centuries. Although the players and locales were different, the same basic tendencies can be seen in the rise of Islamic, Hindu, Jewish and other form of religious fundamentalism. They represent a reactionary and illusory desire to return to a fictitious utopia, the conservatism of those who cannot tolerate any threats to their vested interests and power. The leaders of these movements cynically manipulate the prejudices and superstitions of the backward and ignorant, while eagerly partaking of the very “sins” and “vices” they rail against from the pulpit or the minaret.

In Pakistan, sixty-seven years after its inception, there is still a raging debate about the ideological basis of its creation. The liberals claim that Jinnah was secular, while large sections of the state and the clergy insist that Pakistan is a theocratic state. In fact, both views can be attributed to Jinnah’s speeches on different occasions. He vowed to create both a secular and theistic state depending on the background of the audience that he was addressing at any particular time. However, at the present time, most forms of Islamic tendencies in Pakistan are traditional and conservative, and far too diverse to submit themselves to a monolithic version of Islam. There is an absurd notion being flaunted by the liberal media and intelligentsia in Pakistan and elsewhere, especially in the west, that there should be a differentiation between the ‘moderate’ fundamentalists and the ‘extremist’ ones. The experience of the last few decades has shown that extremists can become moderate and vice-versa in no time, depending on the change in financial interests, strategic contingencies and demands of the bosses, mentors and sponsors. It is also the case with the pathetic Ghandist strategy of ‘interfaith dialogue’ to quell the terrorist threat from the fundamentalists. It has proved to be an abject failure but has infact developed as a profitable enterprise in the NGO sector.

The exaggerated coverage and pampering of the Islamic political parties in Pakistan is also an effort of the ruling class to play the primitive sections of the population against the advanced layers to perpetuate the coercive and despotic rule of a rotting capitalism. The boisterous stagnation and conflagration in society in turn is the outcome of the convoluted and strangled development of Pakistani capitalism, where the ruling classes entered the arena historically belated and economically in dearth.

The picture of this uneven and combined nature of development is evident in Pakistan’s urban landscape. Pakistan remains in many ways a rural society, where even the rapidly expanding cities are still mostly rural in culture, owing to the constant flow of migrants from the countryside, and the failure of the Pakistani bourgeoisie to create an advanced industrial state and a modern society that could absorb and develop this influx. Most varieties of Islamic fundamentalism prevalent today are mainly an urban or suburban phenomenon. The rural masses can be occasionally stirred up to religious panic but for centuries these regions had secular cultural traditions. Only the advent of massive cash inflows in the form of black money and the distorted capitalist intrusion resulted in a fictitious modernisation. It destroyed the relatively harmonious life and ancient rich cultures in the countryside. However, instead of harnessing and beautifying nature they have disfigured the rural landscape with disastrous environmental and social consequences.

There has also been a transformation in the various Islamic schools of thought with this imposition of fractured capitalist relations. Theologically, most of the Sunni Islamic tendencies, from the parties of political Islam like the JUI to Jamaat-e-Islami and the fundamentalist Taliban and other outfits, come mainly from the following Sunni traditions: The Deobandi, Ahle-e- Hadith and the Barelvis. The Shia tendencies that have sprouted in the South Asian subcontinent are mainly of Persian origins. But there are also several Shia sub-sects and cults from the Ismailia to the Alawites, as well as certain caste divisions like the Sayyids and the Musielis. However, there is a much greater mutual tolerance and harmony between the Shia sects as compared to the lately exacerbated belligerence and violence amongst the Sunni sects. According to the Muslim traditions, the decline of Islam would become symptomatic with the emergence of 72 sects.

The famous madrassa founded in Deoband (now in U.P. India) in 1866 is the base of the Deobandi inception. The Ahle-e-Hadith was a branch of the international Salafi tradition, heavily influenced by the orthodox revivalist movement, Wahabism, founded by Mohammad Abdul Wahab (1703-1792) in Nejd in the Arabian Peninsula. The present bosses with particularly close links to the brutal Saudi Arabian monarchy carrying out heinous despotism in accordance with the injunctions of this puritanical version of Islam dating back to the origins of this tradition in the sixteenth century. But until recently a majority of the Sunnis in Pakistan, in so far they were aware of belonging to any political tradition in Islam, belonged to the tendency of the Barelvis, named after a madrassa founded in 1880 in the town of Bareilly – also now in U.P. India.

Until the late 1970s, religious sectarian prejudices were so irrelevant that most people didn’t know to which particular sect they belonged. Shias and Sunnis intermarried and there was never any social stigma involved. However, after the draconian Zia dictatorship, which was a harrowing counter-revolution, the movement of the working masses was thrown back and reaction began to dominate society. The reactionary despot needed the Mullahs to perpetuate his atrocious rule by manipulating primitive sections of society, especially the petit bourgeois, with religious bigotry, sectarian hatreds and chauvinism. Meanwhile the Mullahs, who never had a widespread mass base, used this ferocious dictatorship not only to get patronage from the state but to indulge in amassing huge wealth and setting up their seminaries and apparatuses to incarcerate society. With the betrayal of the masses by the traditional left and populist leaderships the apathy and alienation of the masses worsened. The wily Zia not only used political Islam to secure his rule, but also stirred up Islamic sectarian hatreds to further divide and atomise the worker and peasant classes. Politically, he tried to revamp the traditional party of the Pakistan ruling classes, the Muslim League, with Islamic overtones. The various Muslim Leagues (N, Q, Z, A, etc.) are the political foster children of Zia’s brutal legacy.

The masses continued to suffer even after the fall of Zia with the introduction of a pathetic cycle of bourgeois democratic regimes. The second PPP government of Benazir Bhutto went as far as to assign as her Home Minister the retired general Naseerullah Babar to organise, arm and train the Taliban to build them into a military force that could capture Kabul. Such was the secular characteristic of this woman prime minister, that she had rejected and dumped her father’s and the PPP’s socialist legacy in the name of democracy and secularism. The Taliban under Mullah Omer created the Islamic emirate and let loose all hell on the oppressed, particularly the women in Afghanistan. The Taliban word means students and they study this religious fundamentalist education at Deobandi Madrassas of different factions of the JUI. Now Abu Bakar Baghdadi and the ISIL are trying to emulate that Afghan Islamic emirate to create this monstrous Islamic State. In both cases, at least initially, the US and the European imperialists were the main supporters and financers of these bestial Islamic bigots.

The main Islamic parties that represent these sectarian traditions are the JUI, representing the Deobandi School, the Jamaat a Islami, mainly a manifestation of the Ahle-e Hadith, and the JUP, previously, and Qadri’s PAT which has been trying to besiege the state buildings in Islamabad with its long marches and sit-ins, the modern reformist version of the Barelvi sect. Its character is not less reactionary than that of the other sects. All these parties, and many other rising Islamic political outfits, have extensively used social work and rescue operations in natural disasters to expand their social base. The Jamaat-ud-Dawa deeply linked to Pakistan’s autonomous state spy agency, the ISI, formerly the Lashkar-e-Tayyaba that is accused of the 2008 Bombay terrorism and carnage, excels the most. It’s a practise carried out by most religious organisations be they Christian, Jewish, Hindu or Muslim. But with the suffering intensifying, the masses are bewildered and desperate to find a way out of this orgy of capitalist drudgery and repression. In these depressing economic, social and cultural circumstances, adherence to an Islamic network is perceived to provide a sense of security amongst the most poor and alienated sections, including the urban and rural lumpen elements. Poverty is recast as religious simplicity and austerity, amid continuous humiliations and temptations.

In spite of their utopian dreams of an Islamic welfare state, all these parties, fundamentalist terrorist groups and sects prescribe to capitalism no matter how many denials they may construe. In that respect, their conflict with imperialism is temporary and superficial. Until the late 1980s they were in the forefront of the dollar Jihad and the repression of the left instigated by imperialism. Political Islam is only in the arena with the support of sections of the state in this rapidly eroding epoch of mild reaction. Once the mass movement erupts, the class struggle will bring to the fore the real material divide of wealth and resources between the ruling and the working classes. Only the victory of a proletarian revolution can put an end to this excruciating deprivation and alienation. This would be the beginning of the end of political Islam in Pakistan, and religion will become a private matter of the individual, without any external pressure, social dictates, interference or force to adopt any particular sect or religion. A socialist revolutionary victory is the only guarantee to defy and avert the looming threat of a savage barbarism that poses a harrowing danger to the existence of human civilisation in Pakistan.