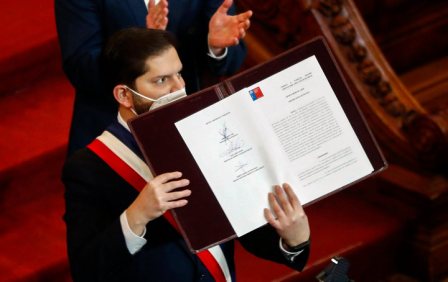 The Chilean population has voted overwhelmingly to reject a proposal for a new constitution to replace the current document, written under the dictatorship of General Augusto Pinochet. The shockingly strong “reject” vote of 62 percent comes just two years after an explosion of street protests and strikes forced conservative President Sebastian Piñera to promise the drafting of a new constitution. In a plebiscite held in November 2019, 80 percent of the population voted for a popularly-elected convention to do the re-drafting, which is a long-held demand of the Chilean left.

How could such a massive turnaround in sentiment occur in such a short period of time?

The 2019 rebellion shook the Chilean political establishment to its core. When the government attempted to raise metro fare prices by 30 pesos, school students began rioting, opening subway stations and triggering a wave of mass street demonstrations that lasted months. While the fare hike sparked the protests, demands addressing a range of social and economic grievances quickly developed, from free education to overhauling the privatised pension system and nationalising key sectors of the economy such as mining. The movement reached its high point on 13 November with a successful general strike that paralysed much of the country. The demands of the rebellion were championed by the slogan “It’s not 30 pesos, it’s 30 years!”—a clear expression of anger at the economic legacy of the dictatorship.

The rebellion demonstrated the potential for workers to challenge the power of the capitalist class. Despite resorting to violent repression in response to the initial protests, calling the military into the streets for the first time since the dictatorship, Piñera was forced to make concessions to the millions of people participating in street demonstrations and strikes around the country. Early on, he retracted the metro fare hike, but this only gave people greater confidence to fight for more, as calls for Piñera’s resignation began to grow.

In an attempt to find a way out of the crisis, Piñera looked to the social democratic parties to support a “Pact for Peace and a New Constitution”, in exchange for an end to the street demonstrations and strikes. Under the Pact, the country would hold a series of votes on whether to draft a new constitution, on the drafting process, on a constitutional convention and, finally, on whether to approve or reject the proposed new text.

The goal of the pact was to channel the popular movement into a safe, electoral pathway that would demobilise the millions of protesters demanding an end to Chilean neoliberalism. The centre and centre-left parties such as the Socialist Party and the Christian Democrats, which never challenged neoliberal economic orthodoxy during their many years in government, as well the newly formed leftist coalition Broad Front, agreed to the pact in secret, behind the backs of protesters. In doing so, they saved a despised, right-wing government from being toppled and bought time for the Chilean ruling class to stabilise the country.

The demand for a new constitution is a historic demand of the Chilean people, many of whom view the constitution written under the dictatorship, which privatised much of the economy, as illegitimate. However, it was not the key demand that brought millions of people out into the streets. Rather, it was a demand that developed with the movement. Most demands revolved around economic and social grievances, yet the reformist forces promoted rewriting the constitution as the main mechanism through which to address these grievances. They deprioritised mass mobilisations and strike action and encouraged the population to instead focus on voting representatives into the constitutional convention and, later, into government.

With resistance in the streets and workplaces fading, the political right was able to regroup and pressure the reformists to concede on key issues during the process. In the presidential elections last year, ultraconservative businessman José Antonio Kast came close to winning after getting the highest percentage of the vote in the first round. In response, self-proclaimed socialist and former student leader Gabriel Boric moderated his campaign, highlighting his commitment to fiscal responsibility and law and order to appease the conservative forces against him. While he won the presidency in the second round, forming government as leader of the Broad Front in coalition with the Communist and Socialist parties, his campaign shifted the political terrain to the right.

In government, at every step of the constitutional process Boric and the reformist leaders have capitulated to the right and the capitalist class. The Communist Party, for example, stated that it would not take its seats in the convention until all political prisoners were freed—but on the first day backflipped and took its seats. Further, on a number of crucial votes in the convention, the Broad Front voted against demands that went directly to the heart of the 2019 movement, such as the vote on nationalising extractive industries.

In the lead up to the plebiscite, the right rallied to reject the new constitution, running a scare campaign in tabloids and on social media claiming that the new constitution, and the Boric administration, would turn the country into “Chilezuela” and result in economic chaos. Key business associations vocally supported the “reject” campaign. In response, Boric and his government embraced the slogan “approve to reform”. The slogan was a clear attempt to appeal to centrist voters and appease the right by showing that the government itself was not committed to the new text. Such leadership has helped to create a sense of disillusionment among broad sections of the population that only recently were building barricades in the streets and demanding the overthrow of the government.

Since forming government at the start of this year, Boric has staked his presidency on steering the draft text through the convention and having it approved by a popular vote. The government was also strongly supported by the union bureaucracy, led by the United Workers’ Central of Chile (CUT). The CUT was instrumental in demobilising the protests at the height of the rebellion, and has since stood idly by while living standards have fallen. Its strategy has been based entirely on supporting the constituent process and dampening any left-wing opposition to it. The Communist Party, which dominates the CUT leadership, has played its typical role of providing left cover to the government, in which it holds several key portfolios. This has increasingly alienated the population, whose living standards have declined further during the pandemic and are facing consumer price increases of more than 11 percent by the end of the year.

This disconnect between the ambitions of the reformist parliamentary leaders and the working class has contributed to widespread disillusionment as Chileans have failed to see any meaningful improvements to their lives since the mass mobilisations ended and the constitutional convention began. This has been compounded by the fact that none of the key demands of the 2019 movement are addressed in the proposal. Propositions to nationalise copper mines and free political prisoners were expressly voted down by the convention. Neoliberalism was upheld in the text (“freedom to choose” justifying the continued market provision of social services such as healthcare), as was the independent power of the central bank.

By focusing on constitutional answers to the grievances expressed by the 2019 movement—by channelling mass anger and discontent into safe, electoral pathways—the reformists dismantled the only force that could seriously challenge Chilean neoliberalism and make headway on some of the demands raised by the movement.

This is despite some genuinely progressive reforms being in the proposed text. For example, the draft constitution stated in the first clause that Chile is a social democratic country and, in subsequent clauses, codified basic human rights such as the right to water and abortion. Further, it offered recognition of and protection for indigenous languages and cultures, and environmental protections.

What should have been a serious blow to the legacy of the dictatorship and a win for the left has instead become a victory for the right. The success of the “reject” campaign will embolden conservative forces to further attack working-class living standards and to entrench neoliberal policy in Chile.

The outcome is an indictment on the reformist strategy of relying on elections and institutional pathways to make change. Some forces have already been quick to blame the Chilean people for the defeat, but the left needs to reckon with the failure of the reformist strategy to deal with the crises of neoliberalism. The key task now is to rebuild anti-capitalist politics that reject electoralism and instead look to collective power in the streets and in workplaces to re-ignite the rebellion of 2019.