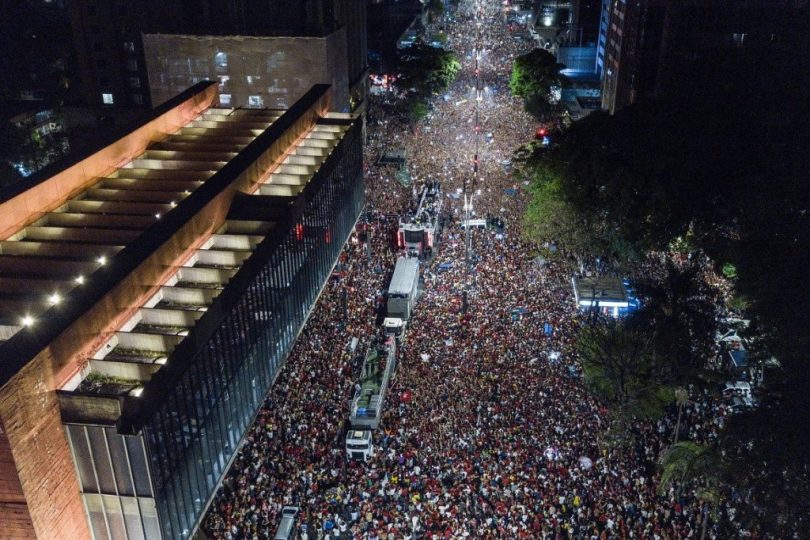 Bolsonaro was defeated, showing that half of the electorate said enough is enough to his project of war against the working class and the poor. Lula won by a narrow margin of 1.8 per cent, 2.1 million votes, confirming a scenario of strong social polarization in the country. A new stage begins, in which the working masses and the poor must organize and fight to defend their gains and attain more. With political independence and winning the streets, because this is the only way we can advance in favor of the majority, without trusting any government that serves the interests of the 1 per cent. 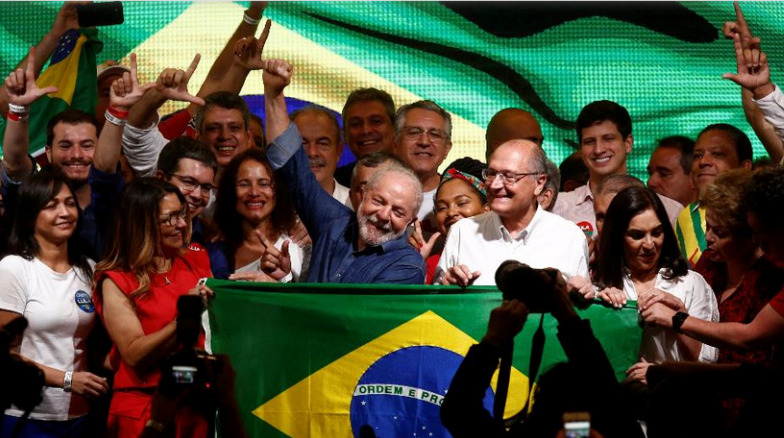 The people celebrate the defeat of Bolsonaro in the street

As soon as Lula’s victory was confirmed, the people took to the streets en masse. Popular joy was expressed for having defeated Bolsonaro, the person responsible for more than half a million deaths during the Covid-19 pandemic, for the destruction of the Amazon and the environment, for the constant attacks on education, health and everything public, the military man determined to defeat the democratic gains of the Brazilian people and a public enemy of women, the LGBTQIA+ community, the indigenous people and Black people. In short, the streets were filled with people celebrating an important victory.

The day after and the editorials of the bourgeois media

“Lula has to show immediate signs of budgetary responsibility and of the will to move closer to the center, politically and economically. He must surround himself with experts and qualified cadres from beyond the narrow radius of his party and allies on the left.” (Folha editorial)

“Which Lula will govern? The Social Democrat of the first half of his first term? The one that defended a long-term fiscal austerity capable of reducing public debt, increasing the primary surplus, promoting reforms to improve the business environment, improving credit instruments and reducing restrictions on competition in the private sector? Or the national-developmentalist that came afterward? (O Globe editorial)

In addition to the gestures that he had already given during the campaign, Lula expressed his commitment to “unity and peace among Brazilians.” Engaging with businessmen and corporations to generate their profits in a “Brazil that will produce once again, rebuilding a serious capitalism,” as he constantly repeats in his speeches and statements. Alckmin, the Tucano affiliated with the PSB and in charge of the “economic transition” in the new government, the MDBist and agribusiness businesswoman Simone Tebet, the neoliberal Henrique Meirelles and a team of economists who are friends of his, are some of the names that are being considered to occupy the main ministries and government posts. In other words, the Lula of this third term seems to adjust to the needs of the bourgeoisie that demands moderation and policies to “improve the business environment.”

O Globo editorial also says: “He is there not only because he is Lula, but above all because he is not Bolsonaro.” A clear message for the new government that is emerging and has a circumstantial support that is driven by the absence of the desired third way that did not materialize and is based on a fact that is real, that Lula and the PT are far from being the mass leadership that encouraged the Brazilian people in the 90s. In the next period it will be shown whether Lula is capable or not of responding to the business demand to discipline the 99 per cent on the basis of a new pact of class conciliation and social peace at the service of the profits of the 1 per cent.

Organize the fight to defeat the far-right in the streets!

Much was said, and is being said, about the possibility of a coup attempt by Bolsonaro and his far-right gang. On the same Sunday of the election, Bolsonarism orchestrated an operation by the Federal Highway Police, stopping buses with Lulista voters in the northeast, the main electoral zone in favor of the elected president, which did escalate into any incident and the election continued normally. The reality is that there was no coup attempt, there were only fervent electoral speeches by Bolsonaro that did not go beyond threats well received by a Bolsonarist base that gathered to pray and cry at the door of the Palace of La Alborada, while the defeated president turned off the lights and went to sleep without wanting to talk to anyone. 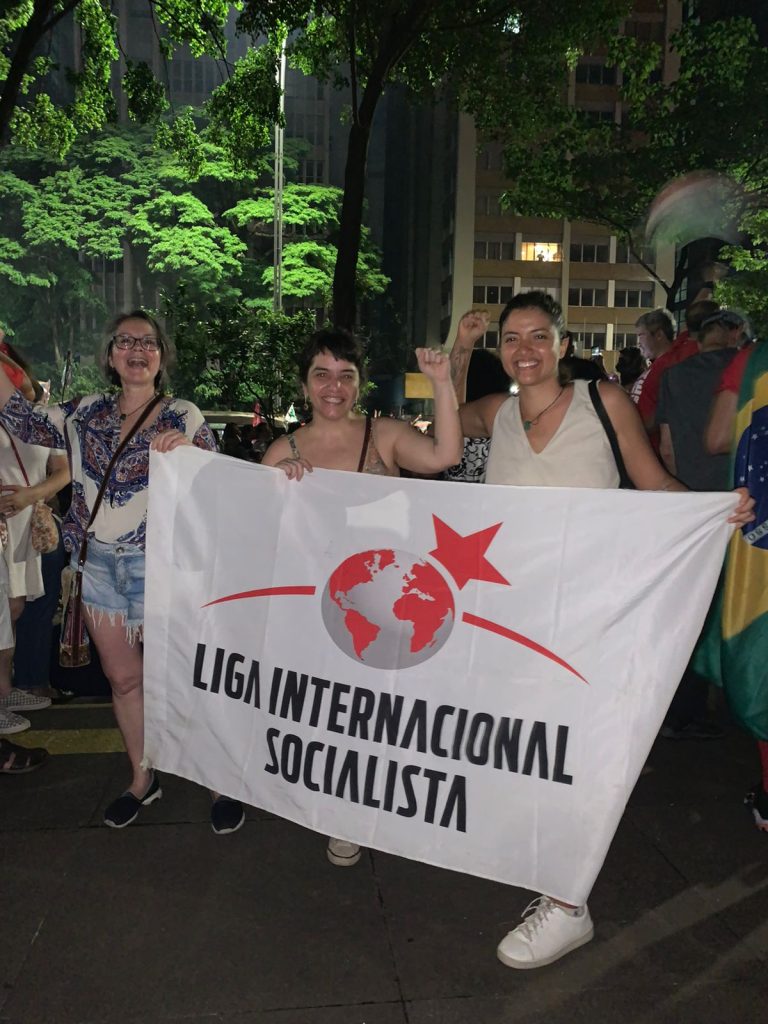 Of course, this does not mean failing to see the danger expressed by the existence of the Bolsonarist extreme right, which now governs the state of São Paulo (the largest in the entire country and national economic center), has the largest parliamentary group and almost 50 per cent of the electorate. For this reason, as we have always defended, it is necessary to defeat Bolsonaro with the struggle of the workers and poor people in the streets. Defeating this government at the polls was necessary and that strengthens the exploited and oppressed, but this cannot be separated from the necessary construction of popular struggle and mobilization in defence of our conquests, to recover the rights that we have lost and to win more.

Lula gives in to the right and to Bolsonarism, demobilizing and calling for trust in bourgeois institutions, that is why it is essential to strengthen the mobilization, to occupy the streets and not be confused with the social democratic siren songs. 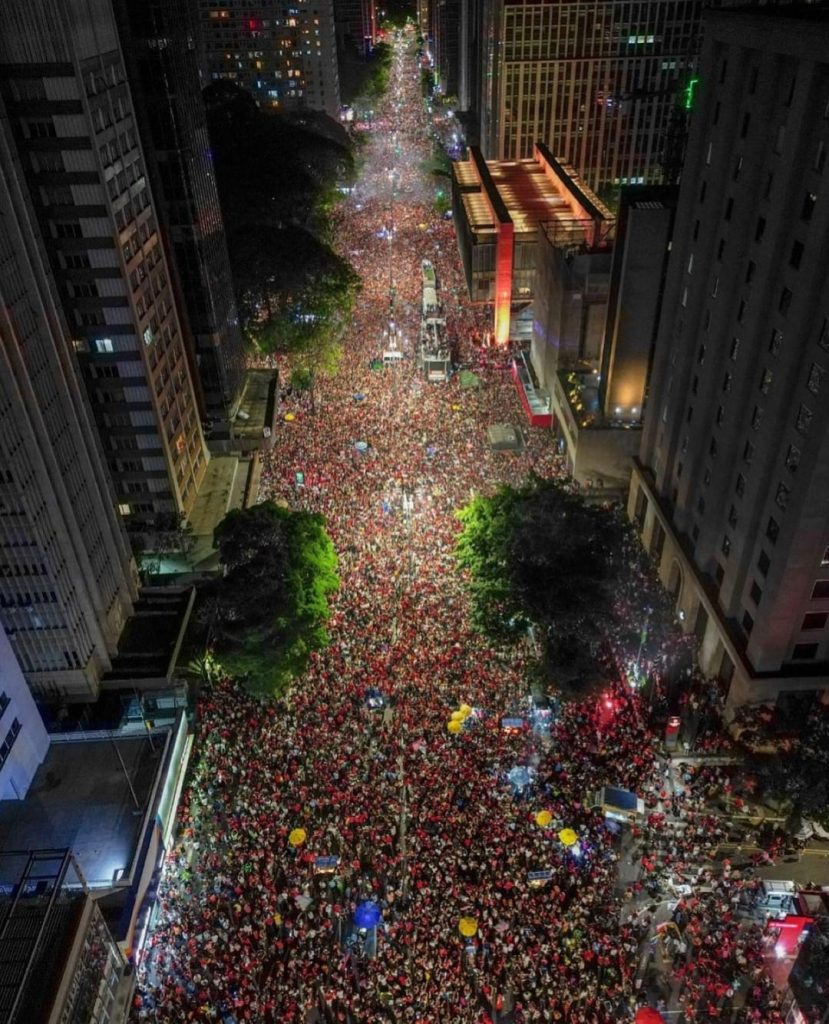 For more left, with class independence and a socialist program

Now the challenge is to organize all that popular strength expressed in the festivities, recover the streets and finally defeat Bolsonarism, defend our conquests and face any attempted attack, whether it come from extreme right-wing Bolsonarism or from the government of national unity that arises with Lula and Alckmin. These will surely (as they did in previous governments) ask the working people for “patience” and “efforts,” not to criticize the new government in the name of “national unity” to prevent the extreme right and Bolsonaro from governing again.

This challenge will stress debates in the broad spectrum of Brazilian progressivism, and with those social democrats who have adapted to the margins of the bourgeois democratic regime of the capitalist state and who govern at the service of the status quo, or those who defend the reformist hypothesis of “changing things from within” and are assimilated to bourgeois institutions, forming governments of class conciliation, a discussion that will take place in the ranks of PSOL, a party that we built.

We enter a crucial moment in the PSOL. It was correct to call to vote for Lula in the Second Round, but the refusal to present its own candidacy in the First Round, both for the presidency and for governor in important states such as São Paulo, was a serious mistake by the majority leadership that weakens the party. The PSOL dissolved itself behind Lula and the PT and disappeared as a left alternative in view of the masses. And now more than ever, we have to prepare ourselves to be the left opposition, raising a program at the service of the working people and not to form a bosses’ government. For this reason, it is not just another debate, it is a fundamental debate that will determine the continuity or not of the Socialism and Liberty Party.

For our part, we will continue to defend and build an independent left-wing political alternative, which intervenes in the struggles that the exploited and oppressed wage on a daily basis, and thus fight for power and the conquest of a government of those who never governed, the workers and the poor. Only in this way will we be able to put an end to the extreme right, the liberal right that disguises itself as a center and any government that tries to attack our rights and gains. It is with this objective that we build the International Socialist League across the world and in Brazil, where we are advancing steadily with the emergence of a new unitary revolutionary project that is consolidating in the Liaison Committee between Socialist Alternative and Socialist Struggle, internal currents of the PSOL. Today we celebrate this victory but we do not stop there, we fight for more!