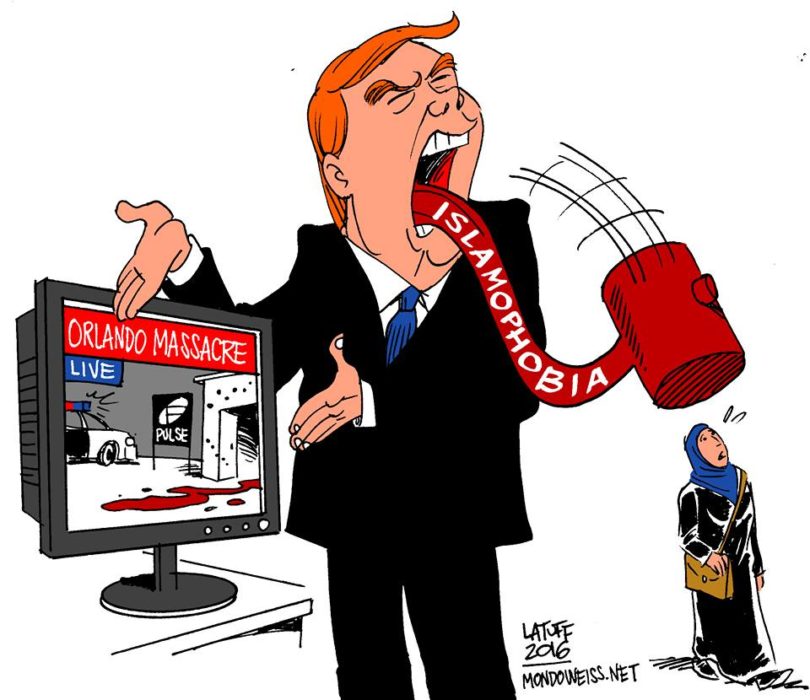 The heinous act of mass murder of forty nine people and injury to over fifty inside a gay nightclub, Pulse,in Orlando Florida on June 12th has shaken the US politics to the core and multiplied the hysteria, hatreds of religious, ethnic and sectarian prejudices by the corporate media far beyond the shores of the US.This terrorist attack is not only the deadliest mass shooting by a single gunman in the US;it is the most horrid incident of violence against gay community and the biggest terrorist attack in the US since the attacks of September 11th 2001.The assailant was identified as 29-year-old Omar Mateen, an American born to parents of Afghan background. During the attack, he is said to have called and swore allegiance to the Islamic State. Witnesses said that he was a regular patron of the nightclub, and some said that they had contact with him via gay dating apps in the past.

Donald Trump, the presumptive Republican presidential candidate expeditiously seized upon this act of terror, just like he did with the previous terrorist attacks in Paris and San Bernardino, California, to boost his campaign and criticised both President Obama and Hillary Clinton for not using the words “radical Islam” when they denounced the Orlando massacre. Trump wrote in one of his tweets: “Appreciate the congrats for being right on radical Islamic terrorism, I don’t want congrats, I want toughness & vigilance. We must be smart!”

Trump challenged Obama to resign over his choice of words and added: “If Hillary Clinton still cannot say the two words ‘Radical Islam’ she should get out of this race …If America does not get tough and smart, we’re not going to have a country any more, there will be nothing left.” ridiculing the Muslim community in America as a fifth-columnists and immigration as a source of danger. Trump warned, “The Muslims have to work with us… They know what’s going on… anyone who failed to help law enforcement should face big consequences.” Attacking Clinton’s immigration policy Trump vividly exposed his Islamic phobia and his exploitative designs for political ends. He accused Mrs Clinton of opening doors to “hundreds of thousands of refugees from the Middle East without any vetting or any prevention of radicalisation of their children and recruiting American children to the ideology of IS and how wonderful Islam is.”

However Hillary Clinton is toeing the imperialist establishment’ soutdated line, which is no reprieve for this crisis pulverising society having no end in sight. Clinton’s futile recipe to combat spreading of dreaded Daesh is again the usual rhetoric:“cutting off financial assistance of terrorists, tracking extremist social media postings and working with parents, teachers, imams, mental health professionals and others to identify when young people are being radicalised and work with law enforcement before it is too late.”  Posing to be radical she even attacked imperialism’s staunch and long time Arab allies and puppet regimes, such as the Saudis, Qataris and Kuwaitis‘to stop their citizens from funding extremists—and to stop supporting radical schools and mosques around the world.’

The rise of Bernie Sanders and Donald Trump during this year’s presidential campaign shows revulsion of the ordinary Americans,in different forms and intentions, towards the establishment including the Wall Street and above all the American socioeconomic system. The Economist seems to be alarmed at the severity of this crisis reflected in the present election campaign. Its editors wrote on Tuesday, “On June 13th Hillary Clinton and Donald Trump gave dueling speeches in response to the murder the day before… The two speeches were polar opposites, giving a glimpse of a general election campaign that will offer America its starkest choice in decades.”

The reality is that Sander’s politics is built on the foundations of the Occupy Wall Street Campaign and he attacks the establishment from the left, the unpredictable Donald Trump has disparaged the same establishment from the right and is detested by the traditional political pundits. The majority of the Republican Party’s hierarchy and US bourgeois mistrust him. His election campaign has been built on stoking fear, preying on financial and social insecurities and ridiculing the existing system with his vagabond insults and shooting off in all directions at the same time. His popularity is worrying for the experts of imperialism and capitalist interests. The Economist wrote, “But in a crisis, he has chosen—once again—to appeal to fear, suspicion and prejudice. Islamic extremism is a very real threat. Mrs Clinton has work to do to reassure millions of frightened Americans that she knows how to fight it. But Mr Trump is offering impractical policies that would harm America if enacted, by driving away precisely those Muslim allies best placed to help. Mr Trump is a man full of surprises. But he is reliably a disappointment.”

Obviously Hillary Clinton is the darling and the favourite presidential candidate of the serious and majority sections of the bourgeois. But she will be more of a George Bush rather than Obama if she gets elected. Her aggressive intent both on the foreign and domestic fronts would exaggerate the already inflamed economic, social and military crisis of the US. But that will be a disastrous discourse but ruling over a socioeconomic system and state that is rotting to the core she doesn’t have much choice. Obama’s policies have already proved to be an abject failure on all fronts. A malaise has set in the US society. The violence and deprivation are throttling vast sections of the society that has miserably failed to recover from the recession inspite of the several proclamations. Mass shootings are on the rise and not only of religious variety. The turmoil is intensifying and the masses are yearning for a change.

This Orlando attack in a certain way shows that The ‘American Dream’ seems to be morphing into an ‘American nightmare’. At the turn of the millennium with a superficially inflated economy beset by an organic decay the US imperialists had embarked upon aggressive crusades abroad and systematic socioeconomic repression of the American workers and the youth. The exposure of the economic redundancy of capitalism and the financial crash of 2008 has severely dented the economic, military and diplomatic might of the largest imperialist empire in history. The corporate media and the bourgeois establishment of the Democratic Party have prevented Bernie Sander’s candidacy of the party. However the politics of socialism has been aroused by his campaign and it gained vast popularity with American workers and particularly the youth. If now Sanders announces the formation of a socialist party rejecting the Democrats that are also representative of the US ruling class and imperialism it can trigger a mass movement of the US workers and youth. Socialism will re-emerge on a much higher plane, with even mightier revolutionary characteristics and sounding the death knell for capitalism in the US and on a world scale.