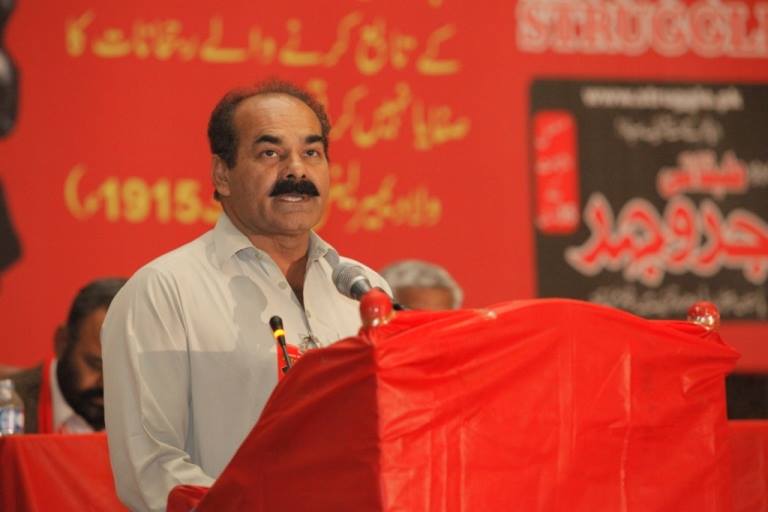 Qamar-Uz-Zaman Khan, a veteran trade unionist was arrested on Saturday, June 22 for organising a demonstration against the International Monetary Fund (IMF) in Sadiqabad, a sub-district in central Pakistan.

On June 22, he had called a demonstration to protest against the federal budget presented in the federal parliament. There is a common perception in the country that the budget has been prepared in line with the conditions dictated by the IMF. Media, despite harsh censorship, and the Opposition parties have accused the government of Pakistan Tehreek-e-Insaaf (PTI), led by Prime Minister Imran Khan, to capitulate before the IMF by appointing the Governor of Pakistan’s State Bank as well as the advisor for the Ministry of Finance on IMF’s recommendations.

Simultaneously, the new taxes introduced in the budget are very likely to hit the poor hard and there is widespread dissatisfaction with the economic policies of Prime Minister Imran Khan, a former sports star, who came to power last year in elections marred by rigging allegations.

On June 22, soon after arresting Mr Khan, the police did not follow the legal processes. Instead, his family and fellow-activists feared that he had gone ‘missing’. In Pakistan, hundreds of activists have been detained incommunicado without following legal procedures. Many such activists are feared dead. In local parlance, such illegally detained persons are termed as ‘missing persons.’

In the case of Qamar-uz-Zaman Khan, when his family and fellow workers alerted the sympathisers about his unknown whereabouts, a spontaneous social media campaign was initiated. Likewise, dozens of trade union activists and workers began to gather outside of the local police station to demand that police should inform the family of Qamar-Uz-Zaman Khan about his whereabouts.

Consequently, the police accepted to have arrested him. However, instead of releasing him, a case was registered against him on the charge of creating a law and order situation. Needless to say that the case against him has been registered on a baseless charge.

Presently, he is under arrest and a solidarity campaign is needed for his release. Already the fact that he did not go ‘missing’ following a campaign on social media and a manifestation outside the police station, is an important victory. Yet, unless the fake case is dropped against Qamar-Uz-Zaman Khan, his security and well-being will remain threatened.