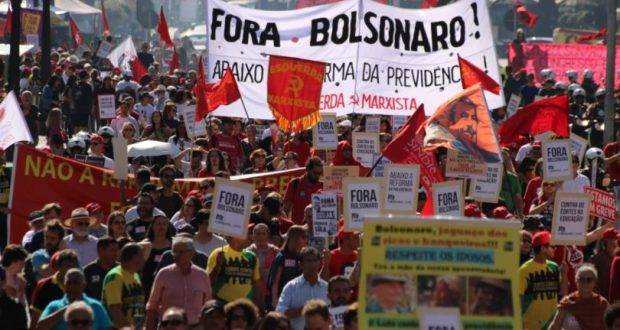 In a week of intense political polarization, the movements of the working class, youth and the oppressed again held a strong national demonstration, in continuity with the expressive acts of 15 May and 30 May. There were stoppages in more than 100 cities. Street demonstrations took place in almost 200 cities, according to the G1 website. A survey by the CUT (Central Unica de los Trabajadores) shows a map with more than 380 protest points throughout the country.

Strikes, stoppages, shift delays and street demonstrations occurred in all states and the Federal District. Mainly, in the capitals and in the big cities we saw the resistance expressed by the trade union federations, the Frente Brasil Popular (Brazil Popular Front), the Frente Pueblo Sin Miedo (People’s Front Without Fear), the student movement and the popular movements, among others.

The size of the demonstrations was unequal. In some regions the functioning of the cities was significantly affected, mainly where public transport workers stopped work. In most cities, in practice, a significant national day of struggles and stoppages occurred. In eleven capital cities and in dozens of major cities, the banking system was paralysed.

In the city of São Paulo, the rail unions (affiliated to the UGT-General Union of Workers) and the workers on the trains ended up backing down from strike action, a serious error. But we should highlight the heroic strike of the subway workers, which impacted part of the transport in the largest Brazilian city.

Once again the movements linked to the defence of public education were at the forefront of the paralysis and protests. There was a strong national strike by teachers in the elementary network, in most states and large cities. The federal education workers also struck with force. The student movement was present in all these actions, unifying their struggle with that of the workers. Whether in the roadblocks, or in the big marches, the strength of youth fighting for their right to a future was felt once again.

The MTST (Movement of Homeless Workers) and the MST (Movement of the Landless) also played a prominent role, building basic actions to guarantee the interruption of traffic in several regions of the country. With more difficulty, the workers’ sectors also staged strikes, stoppages and demonstrations, especially in some branches and regions: the oil tankers nationwide, the metallurgists of the ABC of São Paulo, Paraná and the Paraíba Valley (São Paulo), civil construction workers in Fortaleza, among other categories.

Another feature of the day was the big unitary street demonstrations, at the end of the morning and at the end of the afternoon. Again, hundreds of thousands took to the streets for the right to work, to study, to retire. Particularly in Porto Alegre, Rio de Janeiro and São Paulo, there was also repression, violent and criminal, carried out by the military police against legitimate popular demonstrations. Some activists remain imprisoned: we must demand they are immediately released and not criminalized.

We must not exaggerate our strength, we know the obstacles in this war and the strength of the enemy, but we still believe in the fighting capacity of this resistance movement. Overall, nationally, it was a very expressive day of mobilization, a step forward in the resistance struggles against the Bolsonaro government attacks. It is time to continue betting on the strengthening of our mobilizations: we can have no confidence in closed-door negotiations with the government and Congress.

The Contradictions of the Enemy

The week began on Sunday night (9 June), when the explosive denunciations of the portal “The Intercept” revealed the intrigue of Lava-Jato, especially with the illegal and illegitimate relations between Sérgio Moro, the ex-judge of the operation and current Minister of Justice, and Attorney Deltan Dallagnol.

These denunciations prove, once again, the illegality of the process that condemned Lula. The former president is a political prisoner, whose presidential candidacy was impeded by the intrigue of Lava-Jato. Therefore, it is necessary to strengthen the #Lulalivre campaign, which will have an important moment on 25 June, with a trial in the STF (Supreme Federal Court), and promote the campaign by #ForaMoro, as he has no legitimacy to remain at the head of the Ministry of Justice and coordinate the investigation against himself.

Also, on the eve of the general strike, the rapporteur on social security reform in the Chamber of Deputies, Samuel Moreira (Party of Brazilian Social Democracy, PSDB) read his report to the Special Commission. In it, we saw a retreat from points the Bolsonaro government proposal presented previously. Despite these changes, which are explained by the conflictive relationship between the Bolsonaro government and its allies in Congress and the growing strength of the mobilizations in defence of Social Security, the report is far from representing a victory of our movement.

In the end, the project continues to represent a strong attack on retirees. The combination of increasing the minimum age and increasing the time of contribution, will mean that millions of Brazilian workers will have the right to retire denied or, at least, hampered.

In that sense, the role of the governors was extremely reactionary, including the governments of the PT and other opposition parties. PT governors and the opposition scored an “own goal” in the week of the general strike, supporting the reforms of Guedes and Bolsonaro, just criticizing four points, which were precisely those that were taken from the report by Samuel Moreira. And they are still going to try to reincorporate in the current reform the attacks on state and municipal public officials.

The proposal for reform, now altered by the report presented in the Special Commission, is entering the decisive time of its progress through the Chamber of Deputies, To move forward, it needs to be approved, first in the commission, and then by the plenary of the Chamber in two rounds, with a minimum vote of 308 of the 513 deputies.

We know that an agreement between the government and its allies opens the possibility of approval of this reactionary reform in Congress. But we are in the middle of the fight, nothing is decided yet. The defeat of this unacceptable pension reform of Bolsonaro, Guedes, their parliamentary allies and the governors, will not be conquered behind closed doors within the palaces and Congress.

The only way to defeat it is to continue investing more and more in a unitary and grassroots national movement that resists the brutal attacks on social and democratic rights launched by this far-right government.

A Proposal for Continuing Mobilization

The Trade Unions, fronts of struggle, the student movement and the opposition parties will meet again next week. In these meetings, the discussion must be the strategy for fighting the Bolsonaro government and its attacks. The meeting should begin by repudiating the policy of collaboration with the reform, with only occasional criticism, which has been applied by the governors of the PT and other parties. Our path must be the opposite.

We must rely on mobilization to defeat the reform, the cuts in public education and other attacks of this far-right government. Therefore, it is essential that a new national day of struggle and paralyzes be scheduled, especially when the reform vote is near. Mainly, it is necessary to mark a new day to hold big demonstrations in the streets, which expressively marked the 15M, and the 30M and, now, the 14J.

A first step in this continuity could be the holding of a demonstration attached to the Congress of the UNE (National Union of Students), which happens next month in Brasilia. These large demonstrations have become an important counterpoint to the reactionary acts of the right and the extreme right, who threaten to return to the streets on June 30. Our priority task continues to be to intensify the mobilizations to defeat the Bolsonaro government in the streets.