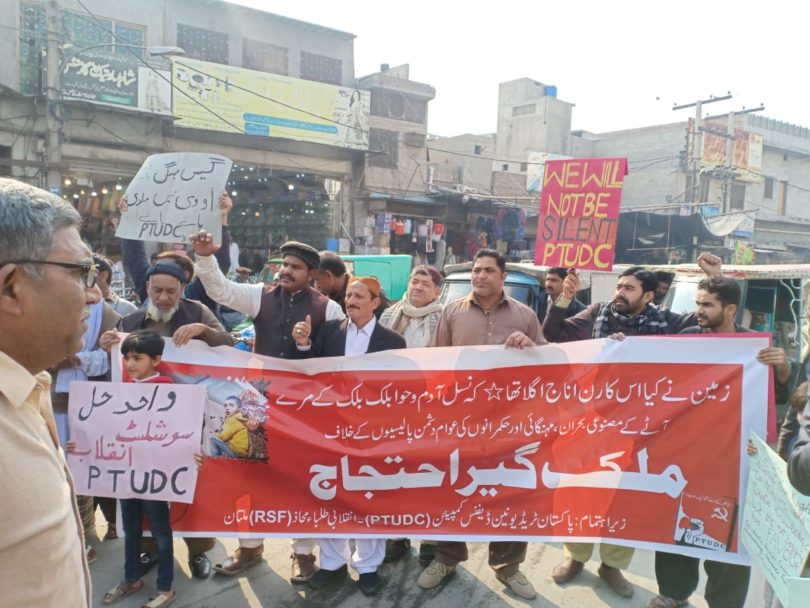 Under the present regime of Pakistan Tehreek-e-Insaaf (PTI), socio-economic crisis of Pakistan has been accelerated. After the economy was handed over to the IMF, the prices of electricity, gas, gasoline and other basic necessities are increasing dramatically, which has broken all previous records. Real income is declining sharply, making the common man suffer from severe anxiety. Inflation is steadily increasing while salaries are declining. Unemployment is booming due to industry closure and according to the latest survey, about 31% of Pakistanis’ jobs have been terminated due to the current economic situation in Pakistan. The remaining job professions are in serious trouble, and 83 per cent of them are in danger of losing their jobs.

Due to the prescriptions of the existing policymakers, the people are now forced to starve. At this time, artificial crisis of wheat flour created throughout the country. The agricultural country is in such a state that it is unable to provide bread to its people. Owners of ovens and flour mills in many parts of the country are striking for lack of expected profits. Of course, wheat is a basic need of the human being, but in the current economic crisis, it has become very difficult for the poor to buy one kilo of flour. Different sections of the ruling classes, the opposition, the provincial governments and the federal government are rubbing salt on the wounds of the people by simply blaming each other. On the other hand, government ministers are further ameliorating the wounds inflicted on the people by making derogatory statements. In order to raise voice against this artificial flour crisis, inflation and anti-people policies of the ruling class, Pakistan Trade Union Defence Campaign (PTUDC) organized protests in several cities of Pakistan. In the first phase, on 26th January 2020, protests were held at Rawalpindi, Multan, KN Shah, Dadu, Khairpur Miras and Karachi. In coming days more protests are planned in other cities as well. Here we publish brief reports of protests.

A joint demonstration was organized by PTUDC, Jammu Kashmir National Students Federation (JKNSF) and Revolutionary Students Front (RSF) at heart of city, 6th Road Chowk. This was attended by different sections of society and speakers condemned the brutal policies of the ruling class which is even failed to provide bread to people. Changez Malik, Joint Secretary of PTUDC, Zubair Latif of JKSNF, Asif Rasheed of RSF and others were among speakers. Participants raised powerful slogans against the government. Slogans were widely received by the passing by people. 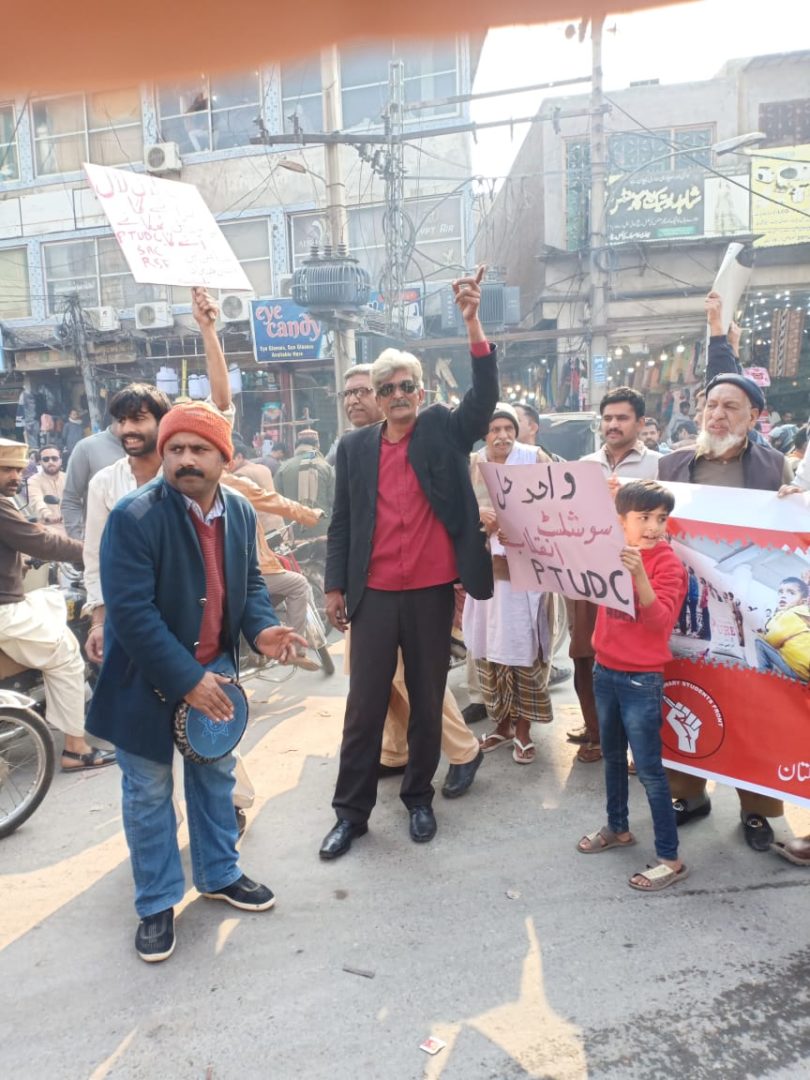 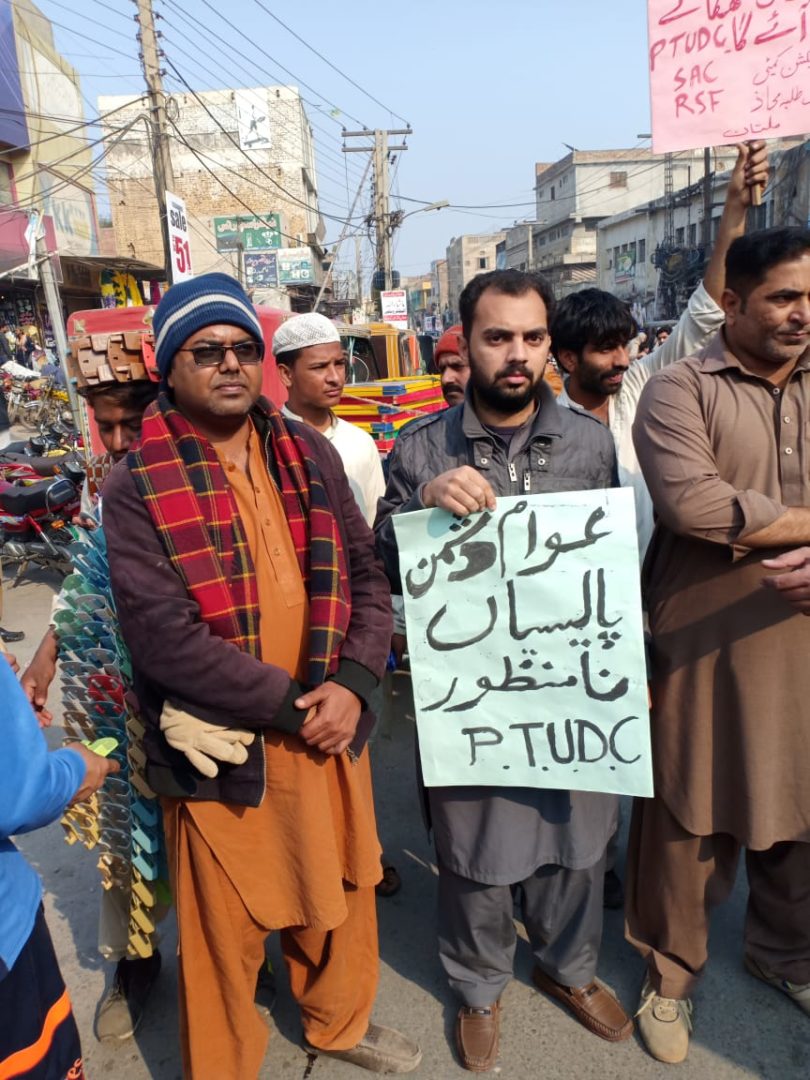 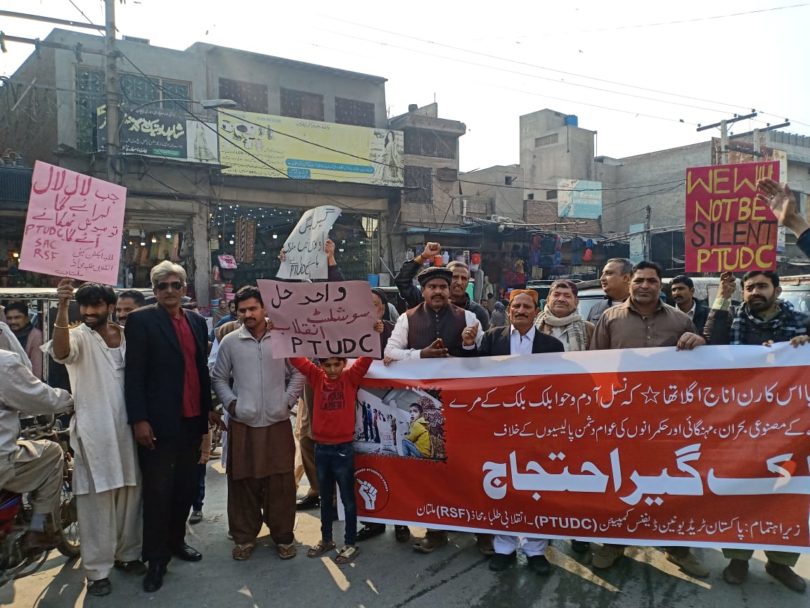 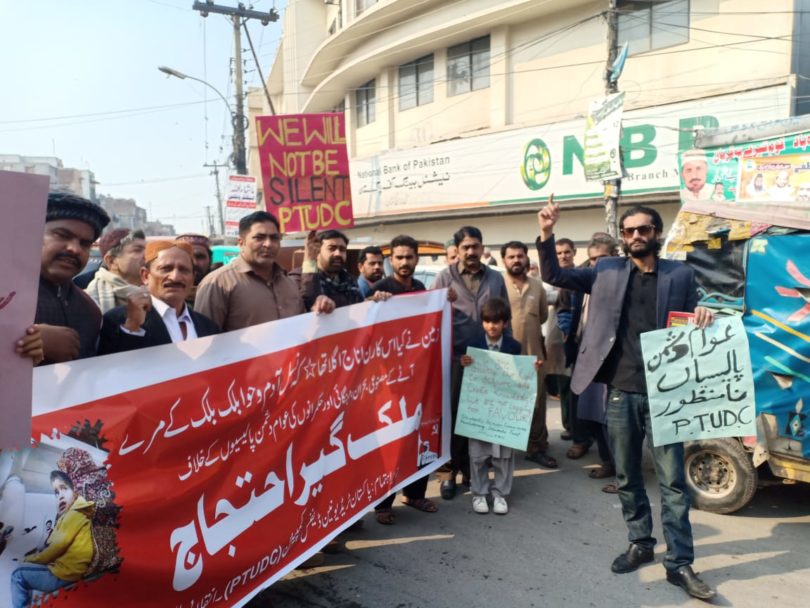 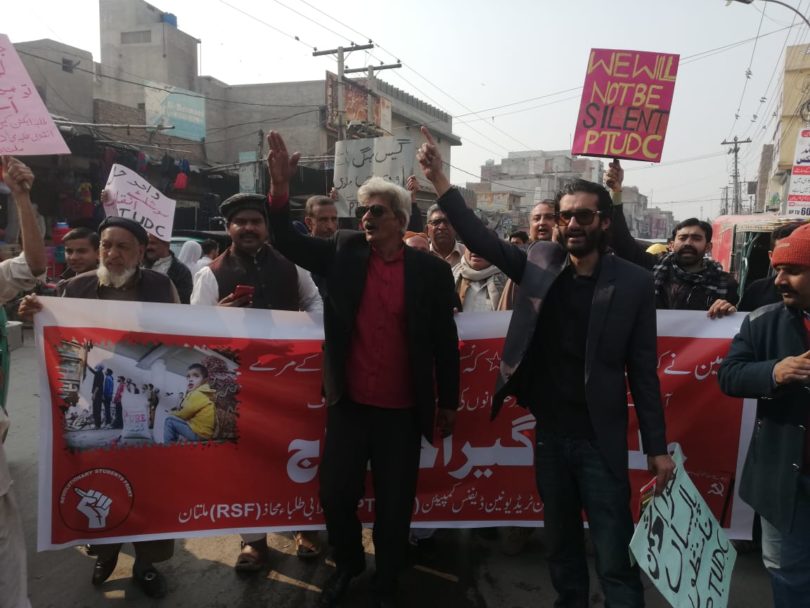 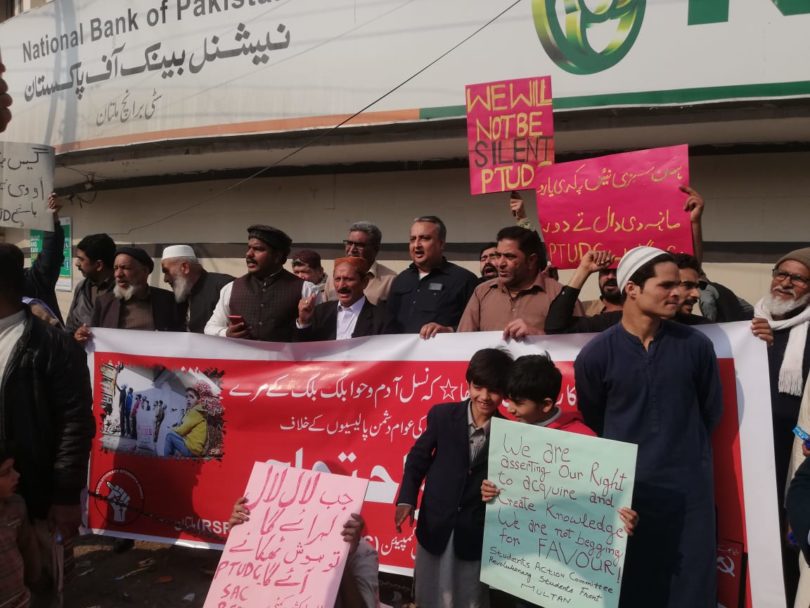 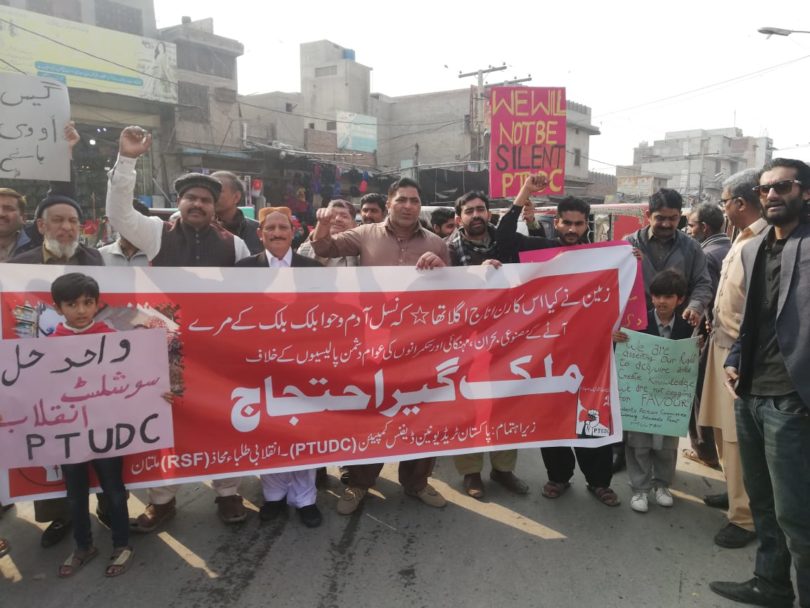 PTUDC along with RSF organized agitation opposite Empress Market Karachi. During the demonstration, powerfull slogans were chanted against hostile policies of ruling classes. Addressing the demonstration, PTUDC representative Dr Haseeb, Jannat Hussain, Nazar Alam and Majid Memon said that the current crisis of flour and sugar was created by the rulers, which is aimed at increasing their profits only. The basis of the capitalist system is “profit”, the struggle against it is inevitable. 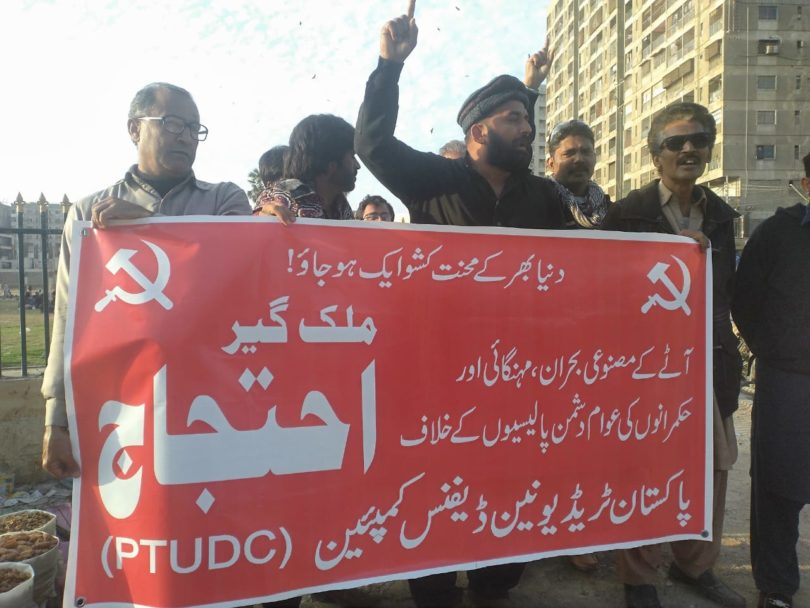 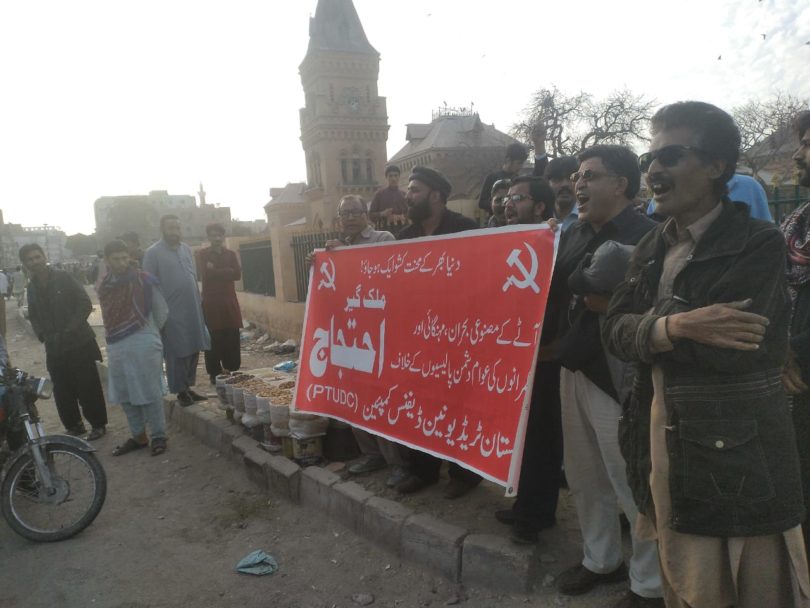 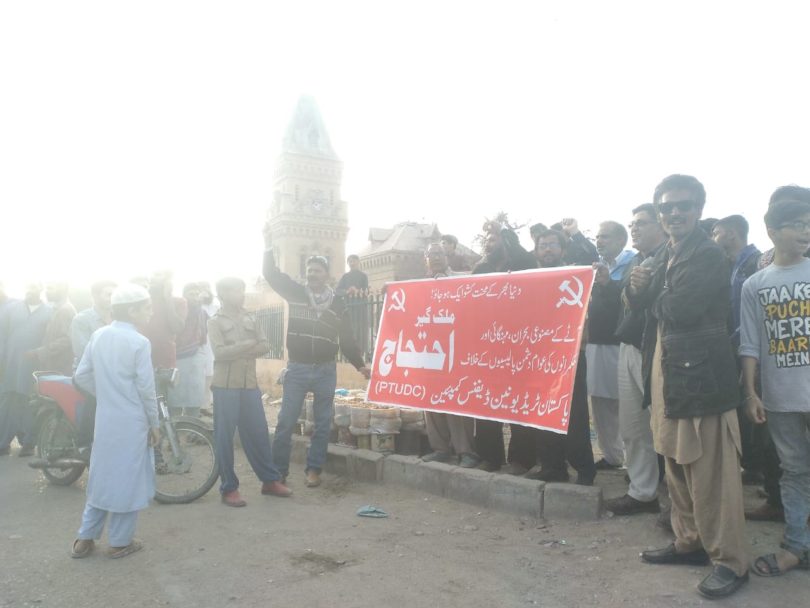 In Dadu, a rally was organized by PTUDC and the Unemployed Youth Movement BNT from Municipal Park to Press club. Representatives of various trade union organizations attended the rally, including the Highways Labor Union. At press club rally turned into public meeting, while addressing participants – representatives of BNT Hanif Misrani and Ijaz Baghio and PTUDC Dadu President Morrell Panwar said that it is the failure of the political parties that created this crisis. We need to continue our struggle against these stooges.

On January 22, a protest was organized by the PTUDC and the BNT on the rising inflation and artificial crisis of flour at Khairpur Nathan Shah, which was attended by a large number of people from different walks of life and the speakers addressed the occasion. The people of the country strongly criticized the hostile policies and called for speeding up the struggle against the capitalist system.