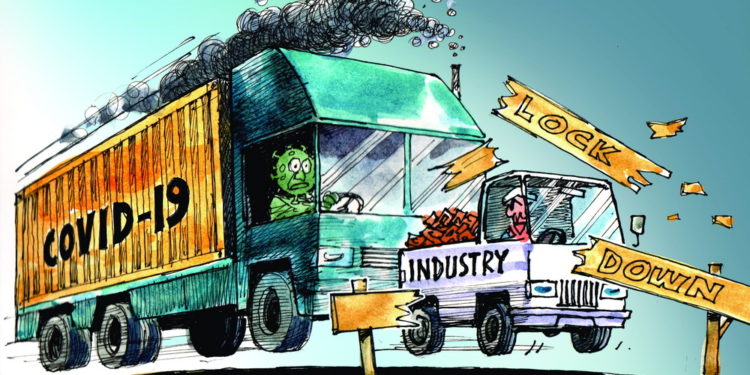 Yesterday, the prime minister of Pakistan, Imran Khan, announced lifting of the countrywide lockdown in certain “phases” starting from 9th May. It begins with reopening of construction-related industries and shopping centers for five days a week from early morning till 5 pm and Out-Patient departments (OPDs) in hospitals. The decision came on a day when Pakistan reported the highest single day COVID-19 new cases, 1764, and 48 deaths.

The provincial governments of Punjab, KPK and Sindh also endorsed the decision of the federal government while the Baluchistan authorities extended the lockdown for another two weeks.

The country is still suffering the epidemic. The official stats confirmed 26,806 active COVID-19 cases and 611 deaths in Pakistan.

World Health Organization (WHO) criticized the act of relaxing the lockdown and reported that Pakistan has been recording an average of 1,000 new coronavirus cases on the daily basis, that is double since mid-April. Moreover, 84 per cent of the confirmed cases are between the age of 20 and 64 years, while the highest mortality rate, 74 percent, has been seen in the age bracket of 50-79 years. Likewise WHO, the Pakistan Medical Association (PMA) has also issued warnings against relaxing the lockdown as  the worst is still to come.

The current decision of lifting the lockdown has been taken in a time when the front line fighters i.e. the doctors, nurses and other para-medical staff are sporadically protesting for the provision of Personal Protective Equipments (PPEs). In these circumstances while the number of effectees are rapidly rising, the lockdown relaxation will result in the rapid spread of COVID-19 amongst the thousands of more people, and the pathetic healthcare system of Pakistan would not be able to prevent the havoc.

A report of Muhammad Qasim, published in The News, claims that in 2019 the trends of health related problems hinted that the country would continue to face the extraordinary burden of both the communicable and non-communicable diseases and yet the authorities failed in devising any strategy to safeguard the population from the infectious diseases and epidemics.

Further statistics reveal that the incidences of communicable diseases like tuberculosis, malaria, dengue fever, typhoid, viral hepatitis and several other infections caused by bacteria, viruses, fungi and parasites continued to grow in 2019 while there’s also rising trend in non-communicable diseases particularly related to the heart, stroke, diabetes, hypertension and cancer.

In the same year, the country faced the worst-ever outbreak of dengue fever with almost 52,000 confirmed cases of the infection while it claimed over a hundred lives. The report also revealed that Cardiac Center at Pakistan Institute of Medical Sciences recorded a 40 per cent increase in the number of heart patients, in 2019, as  PIMS outpatient department received over 180,000 patients in one year, of which 90 per cent were found with heart conditions after the examination. The number of cancer cases also rose in 2019. But very little efforts were made to accommodate these huge number of deprived patients in the public sector. According to various reports, over 200,000 new cases of cancer were reported in Pakistan and over 120,000 people died of various cancers last year.

Other medical sufferings are even incalculable. Majority of the population of Pakistan is at risk of diarrhea, asthmatic fits, dysentery, meningitis, hepatitis, skin diseases and other food- and water-borne diseases.

The number of hospitals, health units, dispensaries, beds in hospitals and equipments or diagnostic facilities are unmatched with the rate of population. Since 1985, the population of Pakistan has almost tripled, but there has been no major establishment in the public health sector has been seen.

The attitude of the ruling class of Pakistan towards this deadly virus is vulnerable. Even in this catastrophe, instead of improving the health facilities they are fighting with each other and trying to divert the attention of masses by opening the Pandora box of 18th amendment. All the major political parties have started to point fingers upon each other and the media timelines are also hijacked by such baseless non-issue. No serious effort was made by the federal or any provincial government to provide food and necessities to the poor working-class, nor did they succeed to prevent the country from the spread of this deadly virus.

The Corona epidemic has paralyzed all the economic and social activities around the world. It has also exposed the organic crisis of capitalism and its industrialization based civilization. The basic essence of capitalism as a historical socioeconomic system is the rate of profit. The capitalists spent billions of dollars on drones, bombs and bullets, in the shadow of “security”, to gain more and more profits, but when it comes to the provision of bread, clothing, free health care and shelter to the millions of starving and homeless people, their generosity suddenly ends, as life are not as profitable as death!

Many so-called scholars are hypocritically stating that this epidemic is not differentiating between the working and upper classes. How’s that possible in a system that is based upon classes! The exploited working class and peasants are actually the one who are suffering the most from this pandemic. They are facing not only the health care deficiency but also badly affected by the worst living conditions and economic attacks. They even don’t have a reasonable accommodation or resources to quarantine themselves.

In the last seventy-three years of Pakistan’s existence, the basic infrastructure have only deteriorated drastically due to the failure and incompetence of the ruling elite to carry forward the tasks of a bourgeoisie society.

The full extent of the pandemic devastation is yet unknown. However, the famine, hunger disease and even starvation are certainly hanging over the heads of the millions. Even in the best scenario, there will be a prolonged disruption of normal activities across the country and even the globe. In the coming few days the life will be much harsher and more agonizing than before. Capitalism is a threat to the entire humanity. It is real the pandemic. It will never give up its greed as it depends on it. The interests of the ruling classes all over the world have turned against the toiling poor masses. The survival of the entire humanity is in a classless socialist society which guarantees the betterment of the human race as a whole and not the profit for the few.