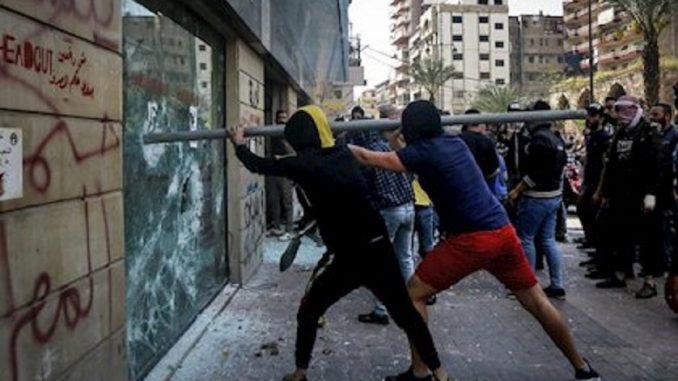 The Lebanese people’s revolution against capitalist austerity took a leap this week after the interruption imposed by the coronavirus pandemic. The people took back to the streets more radicalized against the government and banks. The armed forces’ repression, which claimed the life of Fawaz Fowad, 26, in Tripoli on April 27 added fuel to the fire.

Class Struggle, Pandemic, and Then…

Lebanon’s economy collapsed last year, holding one of the highest public debts in the world, 76,000 million Euros, equivalent to 150% of its GDP. The government adopted a brutal austerity plan designed by the IMF, but the people reacted. In October, a youth-led social uprising overthrew the government with barricades and violent clashes with the police and army. It was no cloud on an empty sky, but part of a global process of rebellions against the first expressions of the capitalist economic crisis. Ecuador, Chile, the general strike in France and other epicenters were also part of this rise in struggle.

The new Lebanese government, emerged out of the same political regime, did not offer any substantial change, so protests continued, led by a youth vanguard encampment in the country’s political center. The quarantine implemented in March forced the suspension of that camp and imposed a pause in the conflict. But the government’s starving policies, the complete absence of social measures to guarantee the survival of millions of Lebanese people in the face of the majority’s inability to work, combined with an uncontrolled devaluation and 55% price increases, suddenly ended the quarantine.

Since April 20, the Lebanese people break the quarantine to the cry of “better to die of coronavirus than of hunger.” Their anger is directed at the government and, particularly, at the banks, which have been closed for a month and have no cash in their ATMs. Over the weekend, the unofficial dollar reached 4,300 Liras, compared to the official one that remains at 1,507, and on Monday the 27th, the people erupted in fury, setting fire to several banks, including the Central Bank. Following Fowad’s assassination, the uprising took an even bigger leap, expanding nationally from its epicenter in Tripoli.

The images of the confrontations reaffirm that the regime’s only response is repression, with a huge military deployment and the use of force against thousands of protesters who have no choice but to take to the streets. These images may announce what is coming around the world, with a leap in exploitation and in the conditions of misery and poverty that the working peoples of the world endure. This dilemma between disease and hunger is beginning to arise in every corner of the world and the responses of governments, albeit in different forms, consist in yielding to the pressures of corporations and multinationals.

In this case, it is the Lebanese regime that is reeling from the force of the mobilized working people. Our solidarity is with them, and with our comrades in the Movement for Change, who fight on the front lines and build a revolutionary political alternative for a socialist Lebanon and Middle East.

We prepare ourselves for this scenario in the International Socialist League, strengthening ties of solidarity and struggle with workers around the world.